Iconic Santorini, a boutique cave hotel, offers a new menu and special offers ahead of its second summer season

The phrase “boutique cave”, as it turns out, is not an oxymoron. Iconic Santorini, a boutique cave hotel, one of the most dramatic hotel locations in Europe, has just opened for its second season, following transformation of traditional cave homes into a luxury hotel experience on one of the Med’s most iconic islands.

The boutique property was lauded with awards throughout its first year, with visitors flocking to the whitewashed village of Imerovigli – the highest settlement on the fabled Santorini caldera.

From May 1, the hotel will again welcome honeymooners and other holidaymakers into the 20 rooms and suites, set in white vaulted caves along the cliff face, all deftly restyled with panoramic sea views.

The rooms feature traditional fabrics and – despite the rocky surrounds – guests are treated to a swathe of luxury amenities. Large flat-screen TVs, iPod docking stations and surround sound will entertain cave dwellers before and after their gourmet experiences.

Chef Konstantinos “Kostas” Avgoulis has developed new menus for the hotel’s Pergola Restaurant, focussing on local Santorinian cuisine. Designed with lovers in mind, updated hotel packages will incorporate an eight-course candlelit dinner for two – along with a bottle of bubbly, massages, private airport transfers and sightseeing tours around the island. 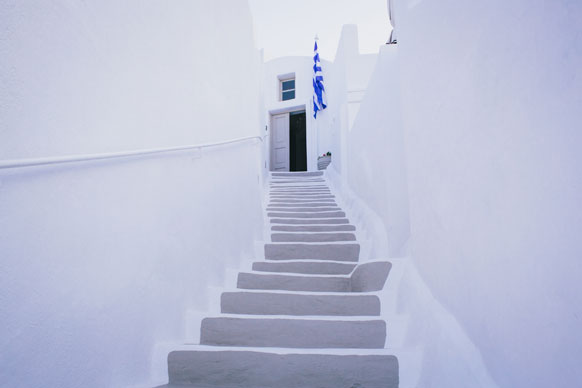