DESTINATION: Mauritius beyond the beach

Dip your toes in the Indian Ocean then point them inland to discover an island filled with unforgettable adventures that go far, far beyond the beach

As I struggle to catch my breath, wipe the sweat and sun cream from my eyes and keep my balance on the steep slopes of Le Morne Brabant, I can’t help but laugh about my situation. Surely nobody would expect a holiday to the honeymoon island of Mauritius to involve strenuous mountain climbing?

But, as well as being home to endless stretches of azure waters and white sands, Mauritius has an unexpected adventurous streak that is bound to please anyone with a love for the outdoors, adrenaline-fuelled activities or genuine cultural experiences. 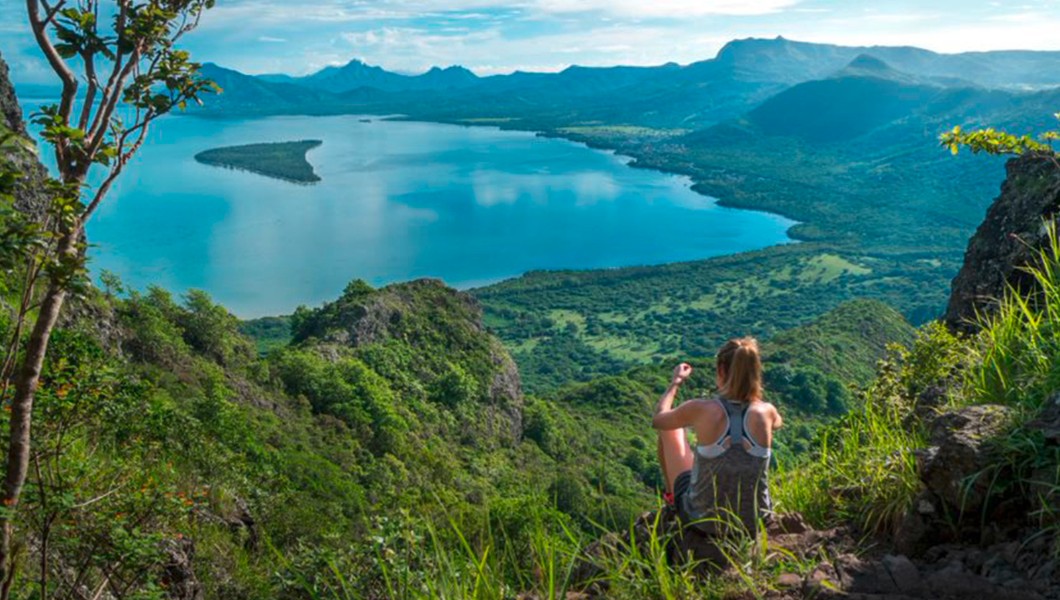 Instagram-able hiking routes, dormant volcanoes, wild and untouched national parks and amazing natural wonders all await those who are willing to push the boundaries a little further than the beach or pool bar. Indeed, rather than the sunbed snoozes and after-dusk dinners, Le Morne turns out to be the highlight of my five-day trip to this enchanting isle.

A majestic, domed mountain situated on its own peninsula over the dazzling blue hues of the Indian Ocean, Le Morne is one of the most recognisable images of this picturesque nation that has previously been ruled by the Dutch, French and British. 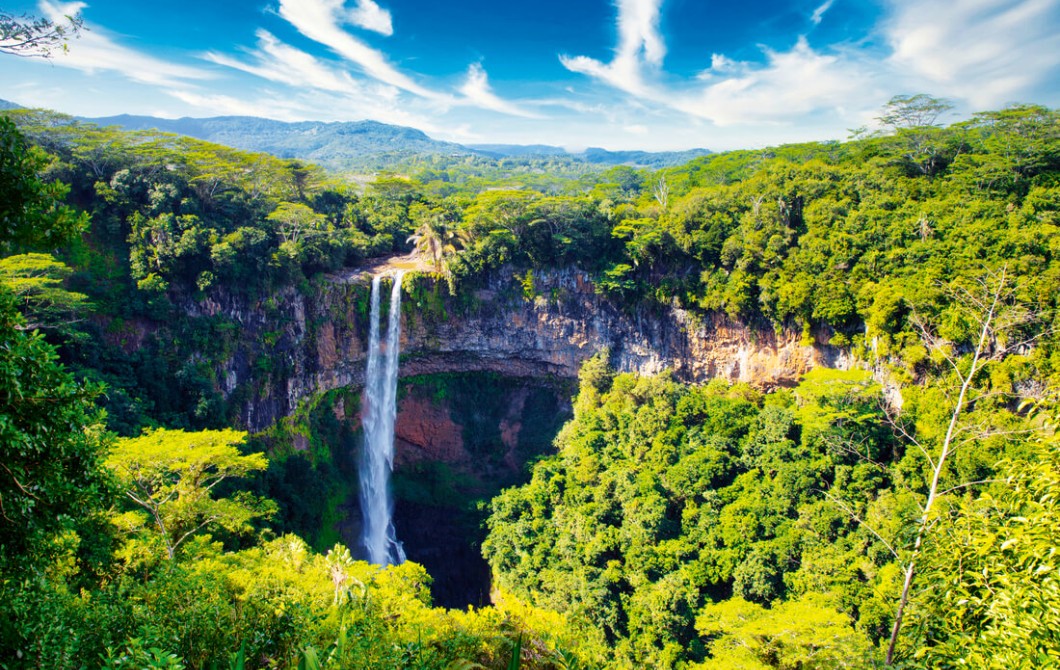 However, as well as providing a sensational viewpoint over the vibrant ocean and luscious greenery, Le Morne is a reminder of the darker side of the island’s history. Once an important stopover in the Indian Ocean slave trade, 160,000 slaves are believed to have passed through Mauritius and Reunion from 1670 to 1810.

Travelling from Africa, Madagascar, and India, it is said that those who managed to escape would use the imposing summit of Le Morne as a place to hide. Tragically, many would then resort to throwing themselves from the top of the 556-metre-tall rock in a desperate attempt to avoid being captured.

Now a UNESCO World Heritage site, Le Morne Cultural Landscape in the southwestern tip of Mauritius acts as a symbol of the slaves’ suffering but most importantly, their fight for freedom. After around two hours of climbing and countless photo stops, we reach the top of this emblematic peak, feeling a contrasting mix of emotions. Despite offering the most awe-inspiring panoramic vistas imaginable, the cross erected in tribute to this awful period makes the towering drop to the blue depths seem just as horrifying as it was beautiful.

Guides are available to hire to provide extra historical context and assistance, but plenty of visitors make the climb unassisted: only the very last part of the hike requires scrambling with your hands. 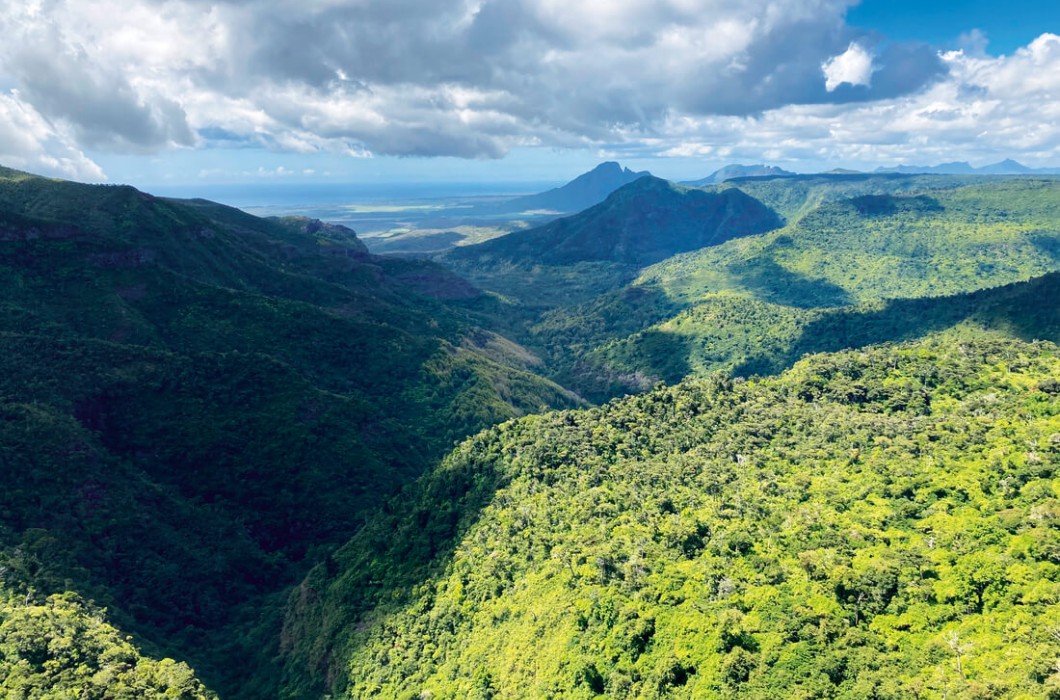 In the spirit of full disclosure, I’ll admit that we try to climb it twice. The first time, we endure a rather nauseating two-hour taxi journey of countless hair-pin bends and bumpy tracks, only to find the gate to the footpath locked. It wasn’t a happy moment! So, it’s worth learning from our mistake and remembering that hikers aren’t permitted to enter much after midday.

But our successful attempt at Le Morne makes it all worthwhile, and reaching the summit even blesses us with a unique glimpse of Mauritius’ second most striking sight, the elusive ‘underwater waterfall’. 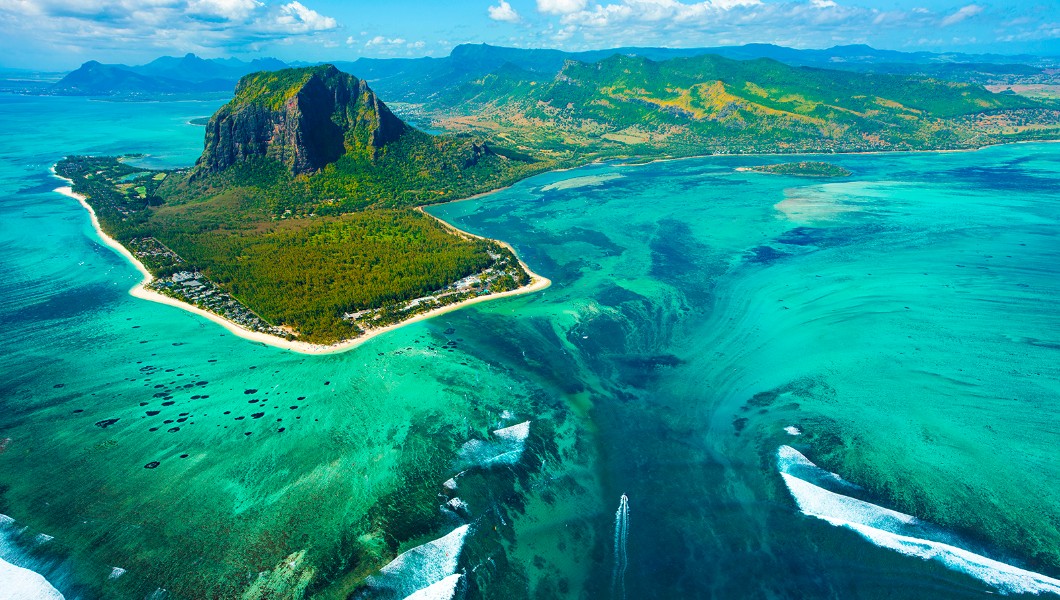 If ever there is an appropriate moment to use the cliché ‘hidden gem’, it is about this extraordinary illusion. Only visible from a bird’s eye view, it looks like a stream of turquoise water plummeting dramatically down into the depths below sea level.

In fact, the 400-metre underwater drop is very real, but the ‘waterfall’ is made from sand and silt. To admire the array of shades and colours in truly lavish and adventurous style, arranging a private helicopter tour is a popular option, with prices ranging from around $600 to $1,200. 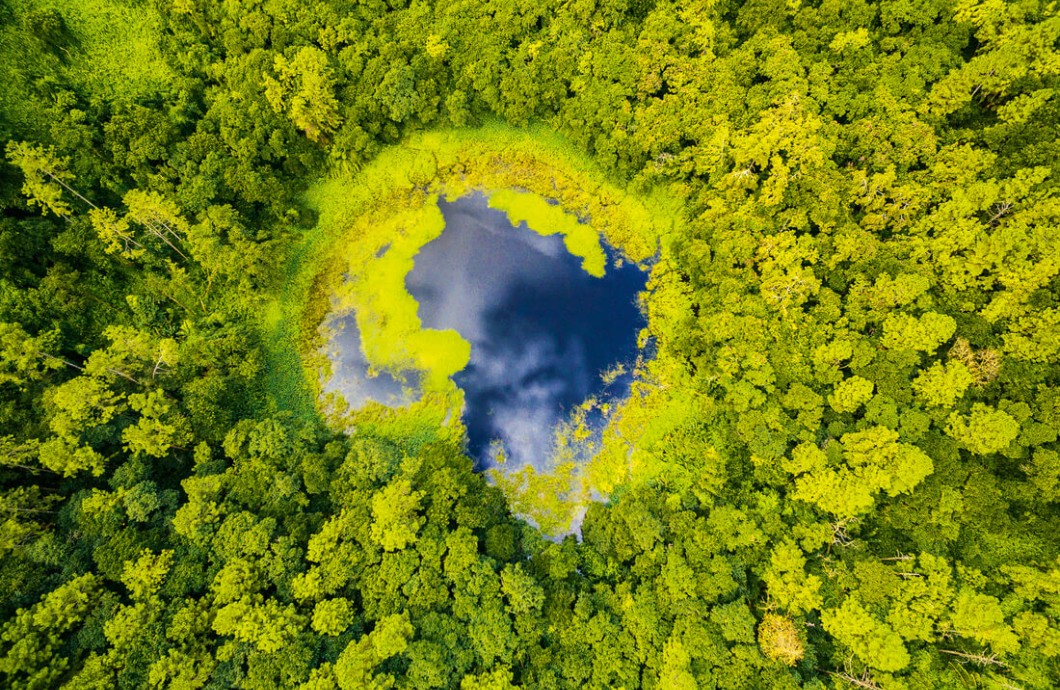 We use our journeys to and from Le Morne to stop at a number of other impressive Mauritian landmarks, including the jaw-dropping Trou aux Cerfs volcanic crater. On seeing that this terrifying pit, measuring 350 metres in diameter and 605 metres high, was such a casual sight to the Mauritian people that it was used as a running track in the centre of a town, we begin to grasp how many incredible hidden spectacles the landscape contains. 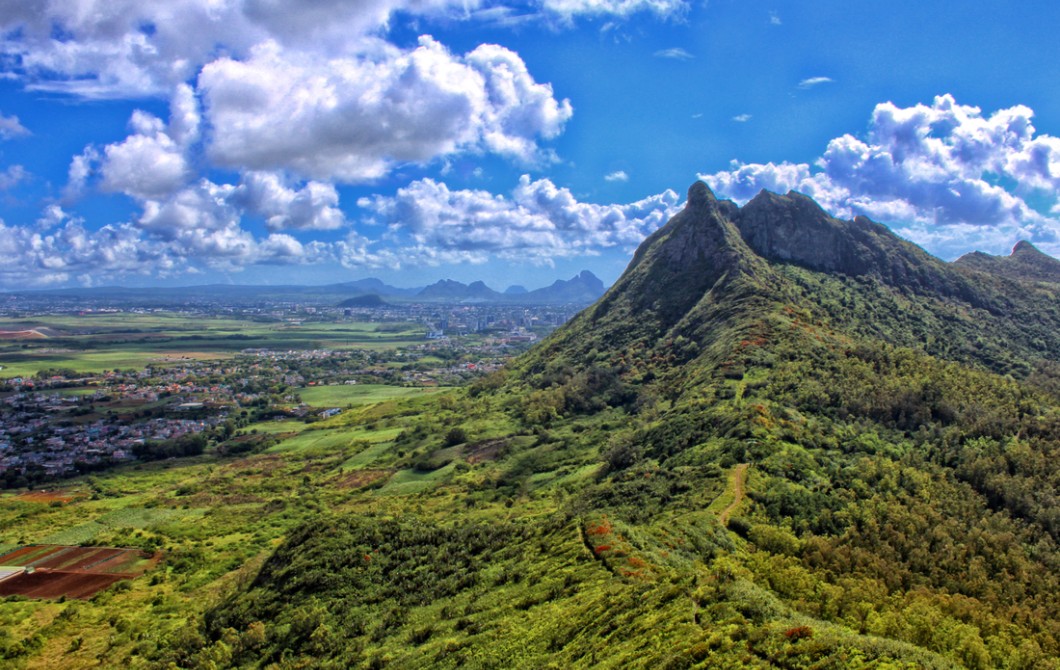 Spoilt for choice when it comes to dramatic jagged peaks, plunging waterfalls and deep canyons, we are glad to have chance to tick off two other unmissable natural beauty spots: Chamarel 7 Coloured Earth, a hypnotic geological formation, and Black River Gorges National Park. 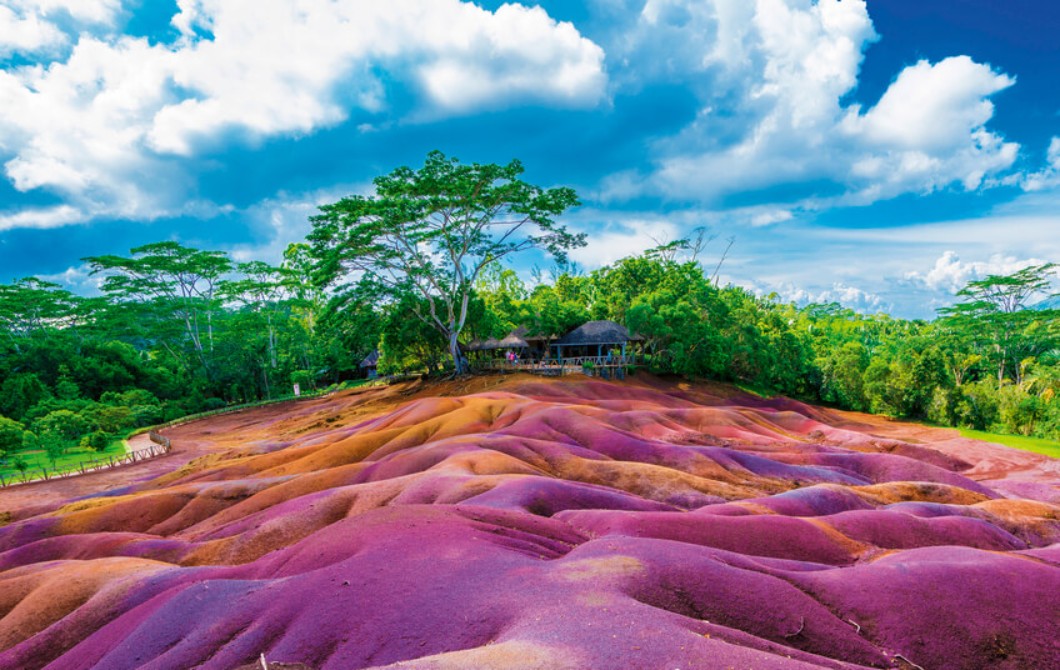 Wild and exotic, the latter contains over 50 kilometres of walking trails, and it is the largest protected forest in the country. For us, just stopping by one of the viewpoints is a thrill. As I gaze out over the endless undulating sea of lush greenery, I feel as far away from the skyscrapers of the UAE as it is possible to be. 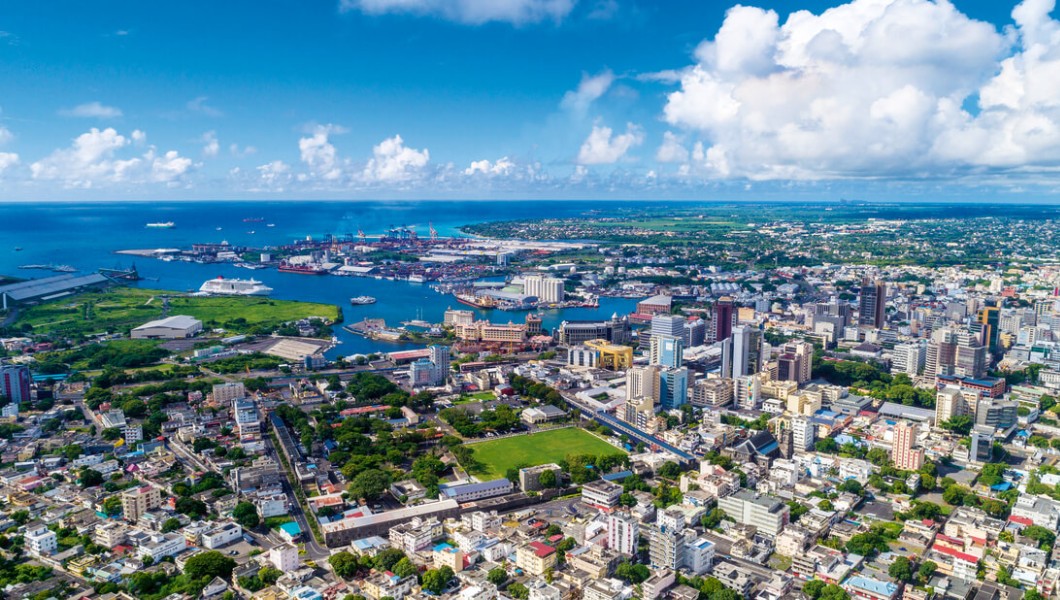 With numerous hikes on offer, ranging from fairly easy to challenging, walkers of all abilities are able to explore this relatively undiscovered corner of the island. Other popular routes include the trek up the spiky rocks of Le Pouce, which rewards hikers with scenes of the buzzing capital of Port Louis.

Thanks to its links to Asia, Europe and Africa, Mauritius is a melting pot of religions, traditions and cuisines. Grand Bassin, the sacred Hindu pilgrimage spot, is found in a huge crater lake that legends say was formed when the god Shiva spilt drops of water from India’s river Ganges. 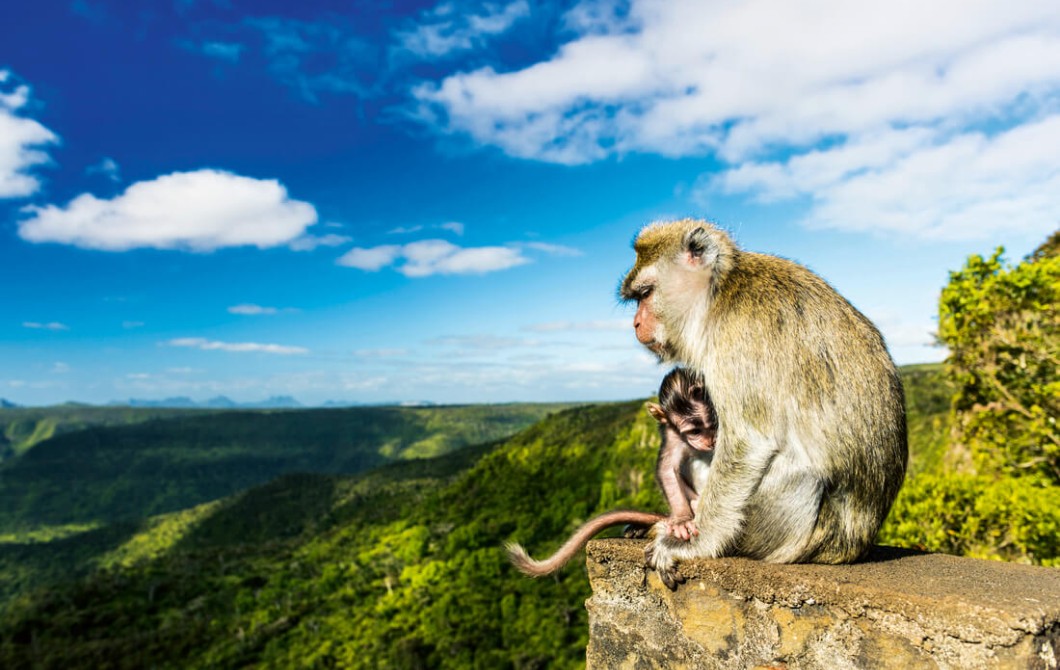 As I step through the gates of this holy temple, with its candy-coloured monuments scattered around the lake’s rim, I can almost feel the electric energy of the place. Despite the tourists, worshippers and mischievous monkeys, a thick silence lingers in the air which makes for a very moving experience. But, most impressive of all are the enormous guarding statues of Shiva and the goddess Durga Maa, which stand at an intimidating – yet enthralling – 33 metres tall. 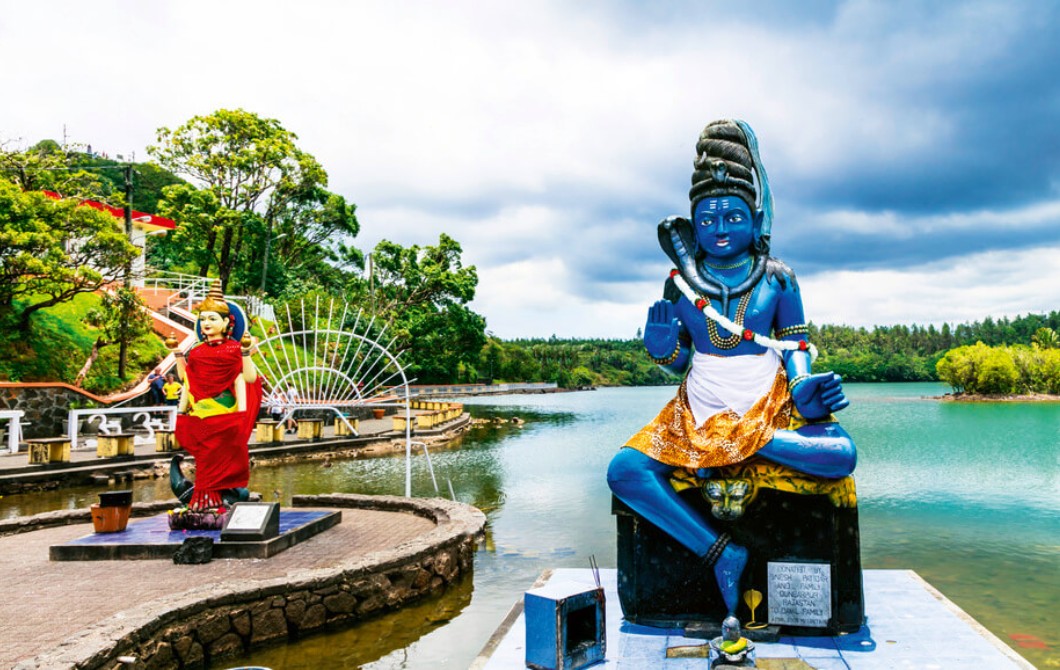 To see this unique cultural wonder in its full glory, try to visit during the spring festival of Maha Shivaratri, which attracts half a million Hindus each year.

If pure, uncensored adrenaline is more your thing, good news comes in the form of the longest zipline in the Indian Ocean. Only for the brave-hearted, it invites you to fly over the dips and peaks of Mauritius’ Vallee des Couleurs National Park at breakneck speed.

Although getting around by taxi is easy, we find plenty to do on the doorstep of our luxurious base at Constance Belle Mare Plage, in the northeast of the island. We spend much of our time kayaking, swimming or joining the daily free snorkel tours that put us just inches away from a throng of colourful tropical fish. As and when we require a break from resort life, we take one of the rental bikes for a spin down the local sandy tracks, within minutes finding ourselves immersed in the ‘real’ side of Mauritius. 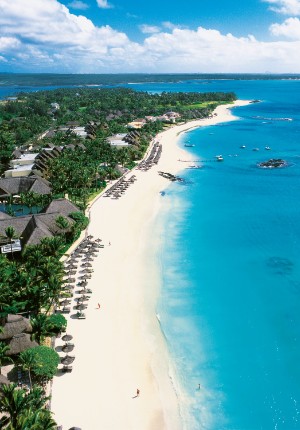 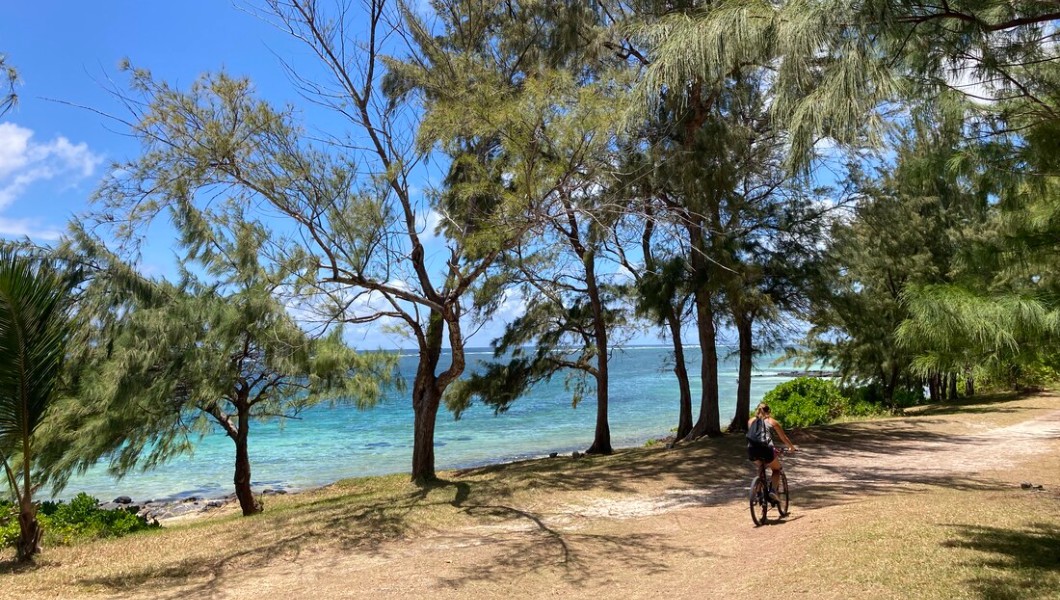 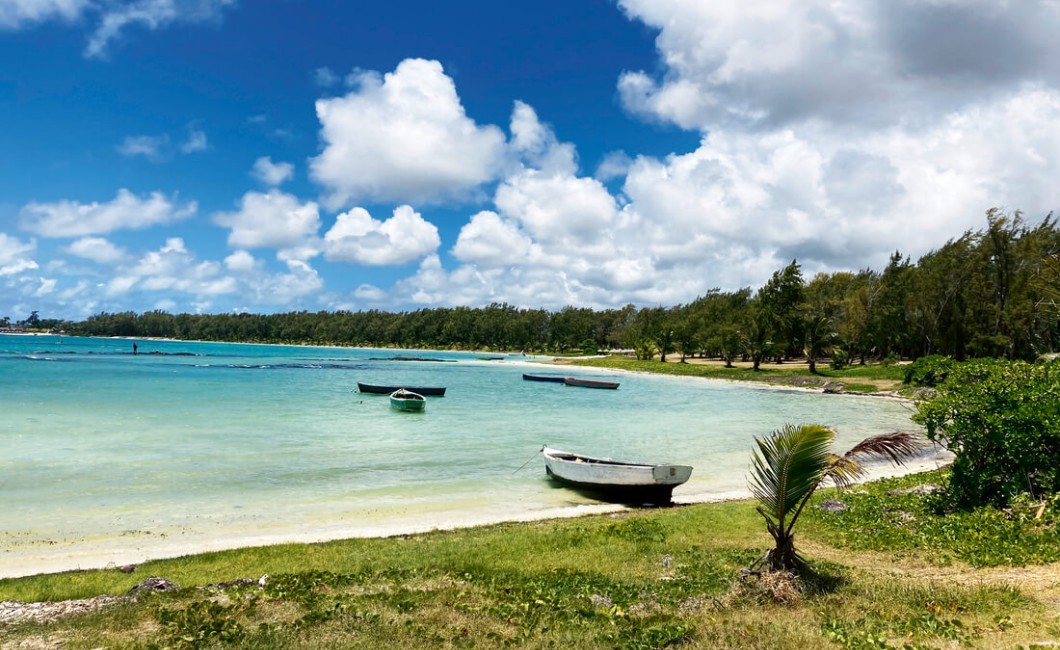 Seeing families flock to Belle Mare public beach at sunset is a heartwarming sight. Here we watch stilt fishermen, children playing in the waves and those seeking a moment of solitude and reflection. The rustic ambiance is even more alluring than the carefully raked sand of our own immaculate resort. Throughout our trip, we find travelling on two wheels, rather than four, allows us to uncover secluded floating temples, gain a deeper appreciation for the friendly island, meet some of its welcoming and gracious people, and go well and truly ‘off the beaten track’. 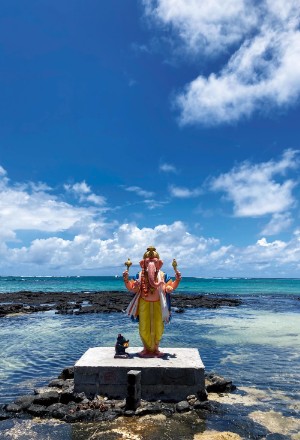 Those who prefer their golden sands to be found in bunkers, rather than beaches, will certainly feel at home in Mauritius, especially with its sun and year-round blue skies. There are world-renowned courses scattered throughout the country, including the iconic island-based Ile aux Cerfs Golf Club. The two immaculate championship courses at Belle Mare Plage are an especially exciting place to be in December when the Legend’s Tour, the professional senior men’s circuit, brings a star-studded mix of former Ryder Cup players, Major winners and celebrities to town for an innovative pro-am tournament that even invites keen social golfers to join in to. 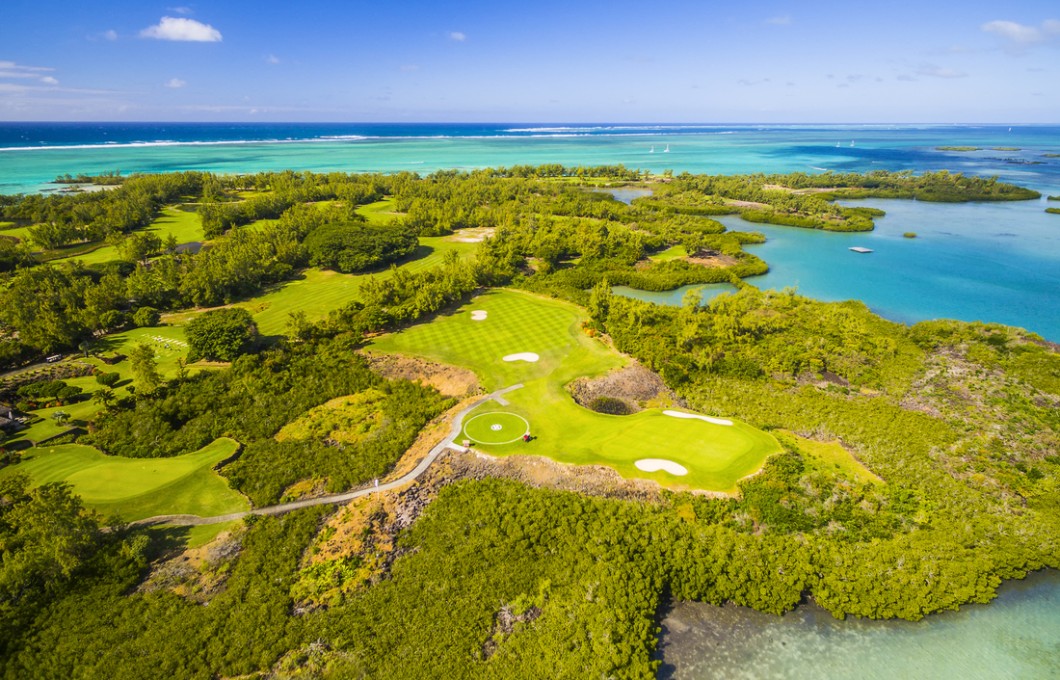 As a very (very) amateur golfer myself, I enjoy playing the courses that pepper this picturesque area. Providing tantalising glimpses of the island’s jagged mountains and bordered with pretty seashell-littered woodland, both courses are shared with the hotel’s even more glamorous neighbour, Constance Prince Maurice. 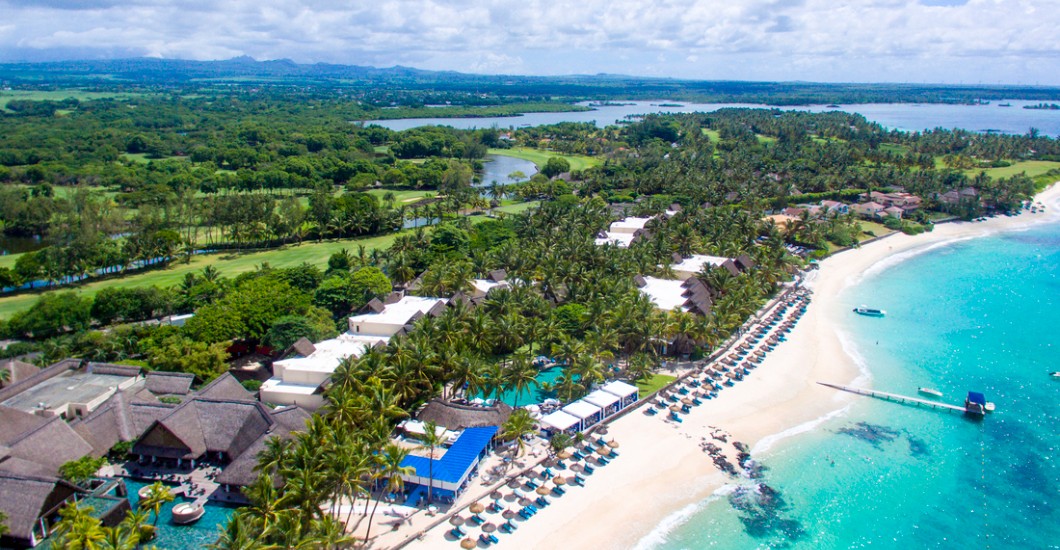 With such action-packed days on the agenda, it feels necessary to balance them with some peaceful evenings at Constance Belle Mare Plage. With floating pool beds, thatched roofs, countless hammocks swaying from towering palms and its private two-kilometre sweeping bay of pure white sand, the resort exudes island vibes at every turn. Combining tropical rural wilderness with the highest levels of comfort and class, each detail is perfectly designed to work in harmony with the surrounding landscape. 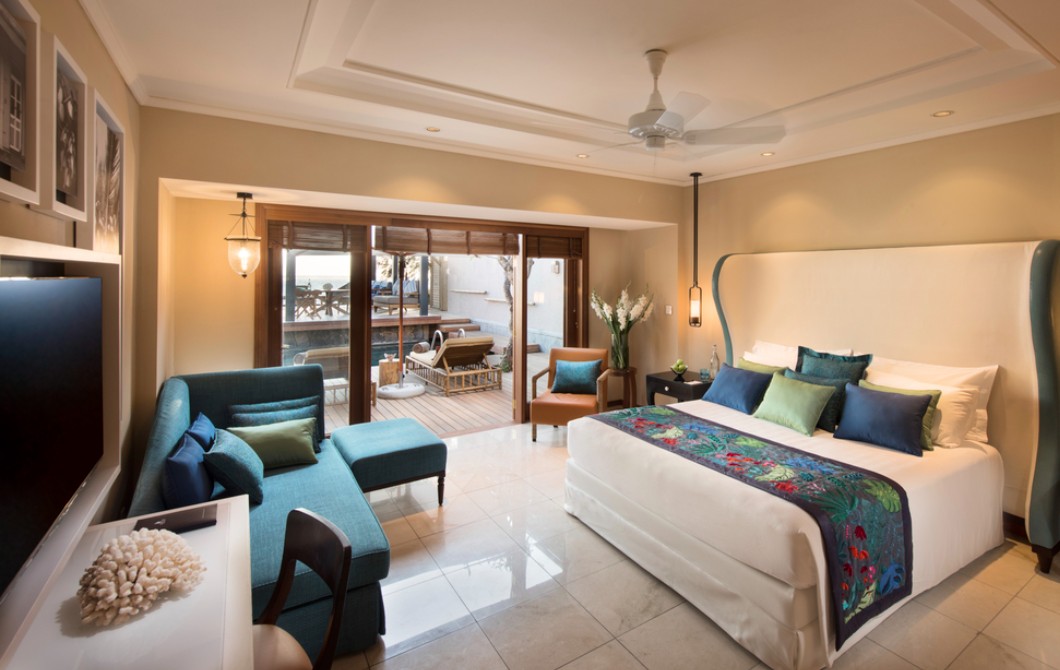 Providing a welcome break from the constant air conditioning of the UAE, the restaurant, bar and check-in area all feature open walls to let the fresh sea breeze flow through. Although we are thoroughly pampered throughout our stay, nothing feels over the top – the perfect blend of simplicity and style. 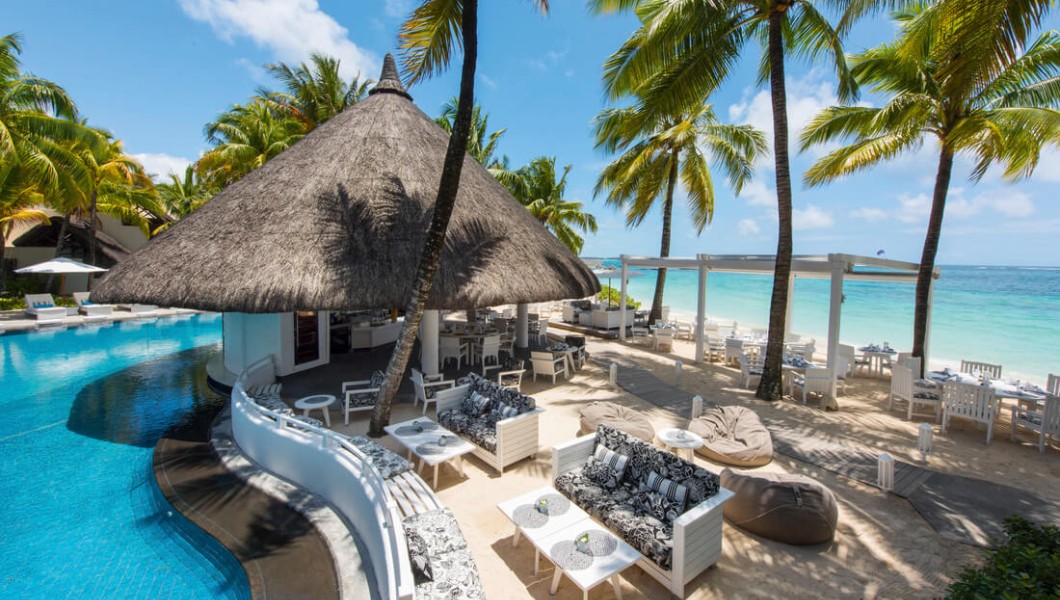 Plants, trees and flowers line every walkway and the ocean is never more than a few metres away. At dusk, we spend time trying to spot the enormous fruit bats that soar overhead, while the sound of the lapping waves lulling us to sleep and being able to eat directly over the ocean on a restaurant terrace, are moments I still dream about to this day. We feast on the freshest seafood imaginable and, of course, authentic Creole household favourites. The hotel is also home to over 40,000 different types of wine, making an evening at the Alpine Chalet-style Blue Penny Wine Cellar an oenophile’s dream and the perfect way to end a day of sun, sea, culture and serenity. 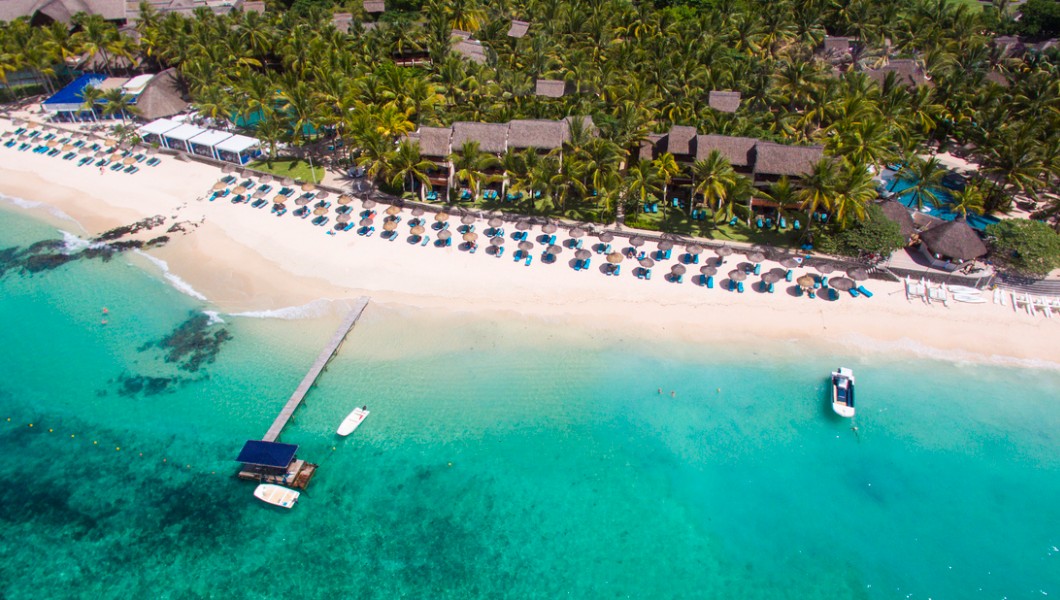 Mauritius certainly deserves a closer look for destination travellers wanting the best of all worlds – fascinating history and rich culture, incredible unspoiled natural beauty, and experiences that will make enough memories to last a lifetime. An island brimming with secrets and surprises, no matter how many times you visit, you’ll always discover something more.