DESTINATIONS: Out of Africa

As a continent, Africa has to be one of the most diverse and beautiful. From Mozambique to Namibia, from the Indian Ocean to the great plains, explore it  in all its natural glory

One of Kenya’s most exclusive private homes, hewn into a rocky hillside on the Borana Reserve in Laikipia, Arijiju is the perfect hideaway for those wanting to safari en famille but far from the madding crowds. Taking its name from the Maasai word for ‘the hill’, it has been designed by leading architects and interior designers, inspired by rock-hewn churches of Ethiopia and French abbeys, resulting in a five-room property that oozes rustic luxury. Naturally blending into the untamed landscape, its three-sided view drinks in both sunrise, sunset and views of Mount Kenya. There’s a spa, gym, yoga deck, squash and tennis courts, cinema, library, hot tub, swimming pool and, of course, immediate access to the 90,000 acres of Lewa Borana Conservancy, home to Africa’s coveted Big Five.

Envelop yourself in a different kind of ‘out of Africa’ moment in Mozambique, swapping wide-open plains for shipwrecked escapism, all wrapped in Anantara’s signature pared-back luxury. Medjumbe Island, off the coast of Mozambique, is just one kilometre long and 300 metres wide, fringed by verdant vegetation and the softest white powdery sands. There are only 12 beach pool villas, meaning the entire island only sleeps 24 guests, perfect for an all-island buy-out. Off the beach and into the azure Indian Ocean, and some of the world’s most undiscovered diving and snorkelling sites await in this protected Quirimbas Archipelago, with its whales, dolphins and sea turtles. The Anantara Spa comes with all of its usual five-star trimmings, while Mozambican flavours come to the fore at Spice Spoons. A truly interesting twist on an African adventure.

Rwanda’s first luxurious and eco-sensitive safari lodge that combines a bucket-list gorilla trek with a pioneering vision of reforestation, Bisate Lodge, on the fringes of Volcanoes National Park, is plumped pretty in the natural amphitheatre of an eroded volanco cone. Spending a night here sounds pretty epic, right?  Add to that its six opulent en-suite thatched villas sitting as if enveloped by the forest, and you’ll truly feel as if you’re sleeping in a canopy of trees. Witness gorillas in their natural habitat to be part of one of nature’s most jaw-dropping experiences, and treks take place from the neighbouring Volcanoes National Park, where you’ll sit in the company of one of 12 habituated gorilla groups for  a 60-minute encounter. You can also track Golden Monkeys in the park’s Bamboo Forest, hike to Dian Fossey’s grave and see the ruins of her Karisoke Research Centre, set in the saddle of Bisoke and Karisimbi volcanoes, with spectacular views courtesy of the 3,000 metre elevation.

Multi-award-winning, Chiawa Camp was the first camp to settle along the banks of the mighty Zambezi River, and is the pioneer of the Lower Zambezi National Park since its opening in 1991. Life here is gentle and unhurried, allowing for the environment to drive your experience. In the Soli language, Chiawa means ‘The one who shares’, giving meaning to the camp’s commitment to the local people and their traditions. A stay in one of the camp’s luxurious tents or a dip in your private pool will often result in an in-camp safari experience, as elephants wander up from the river bed. Venture out for heart-stopping game drives or even a game walk, tracking animals on the ground,  then end your day swapping stories over a beautiful dinner of seasonal ingredients before sleep calls.

Roar Africa has teamed up with Emirates and Great Plains Conversation to create a first-of-its-kind carbon-negative private jet safari, ideal for those seeking ultimate seclusion and exclusivity. Available to just  10 guests at a time, the journey sweeps you across Africa to four destinations – Zimbabwe, Botswana, Kenya and Rwanda – on a 12-day trip, pairing the luxury of private travel – aboard an Emirates A319 Private Jet, with its private suites and shower – with access to noted experts, one-of-a-kind adventures and stays at Mpala Jena Camp in Zimbabwe, Duba Plains Camp in Botswana and Mara Plains Camp in Kenya, amongst others. Best of all, the trip focuses on issues of sustainability and conservation, whilst being carbon-neutral too, allowing you to globe-trot guilt-free.

So what will you see during your ‘greatest safari on earth’? Well, this should give you an inkling: Victoria Falls, the Okavango Delta, the great migration in Kenya and the Gorillas in Rwanda. As safari experiences go, this one really is out of this world. 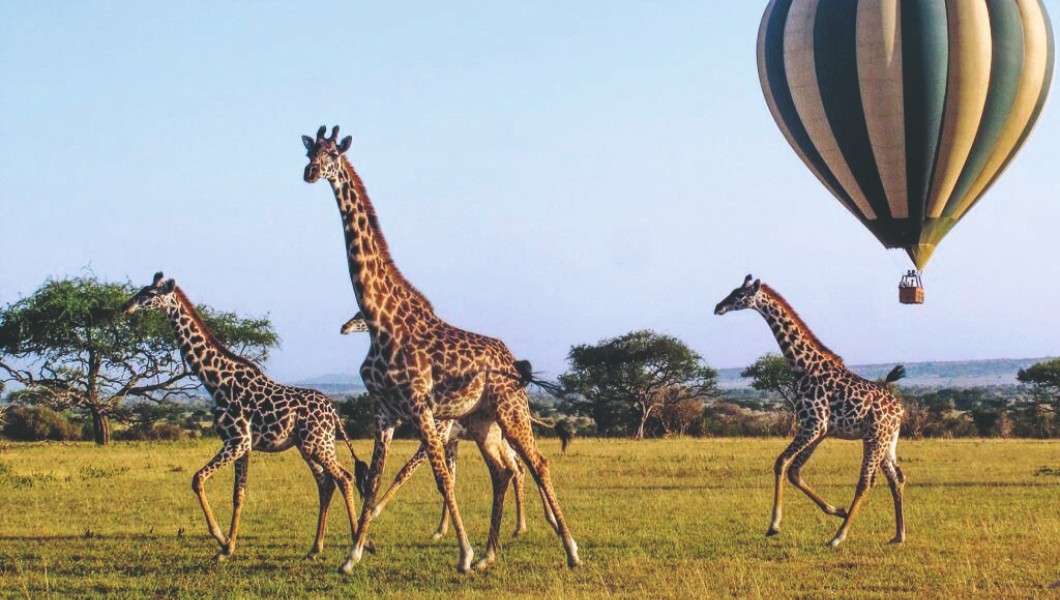 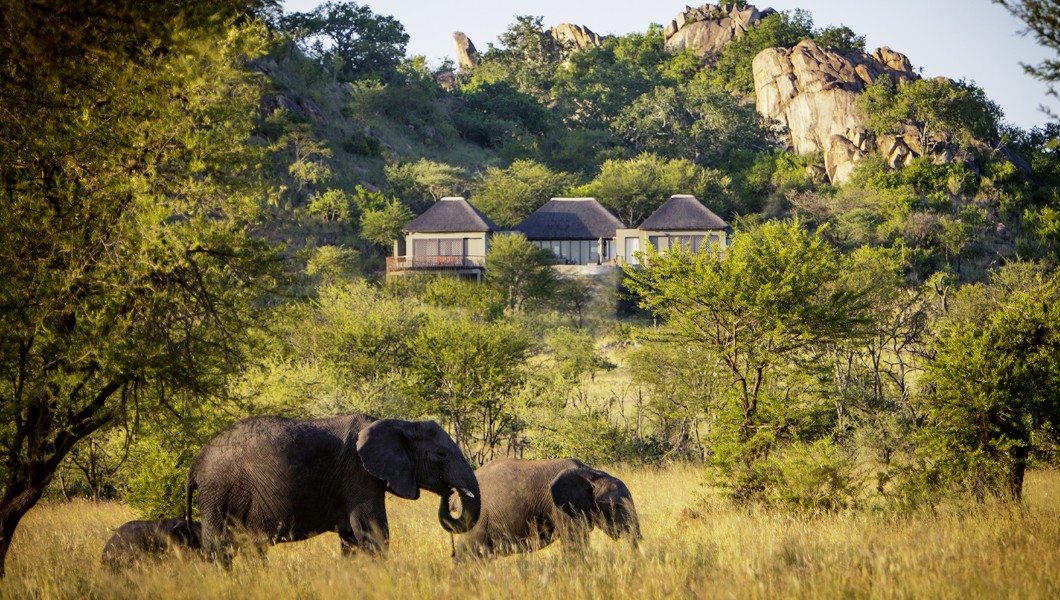 Seven Days in Serengeti is Four Seasons Safari Lodge Serengeti’s exclusive itinerary that lets you enjoy the very best of this geographical region from the lodge’s perfectly placed central location. During your seven days, you’ll venture out on game drives to see natural world highlights, such as the Ngorongoro Crater, the wildebeest migration, crocodiles in Grumeti River, big cats sun-basking atop rocks, the elusive Black Rhino, and hippos mud-bathing in Retima Hippo Pool. Add in a champagne breakfast, a hot air balloon safari across the tranquil Serengeti skies, all followed by a signature spa ritual, sundowner cocktails at Maji Bar and dinner at the lodge’s new restaurant, The Vineyard, nestled amid the wine cellar and serving up a tailor-made seven-course extravaganza, and this is a truly elevated Out of Africa experience.

Putting a contemporary spin on the classical Kenyan safari, Kichwa Tembo Tented Camp in the heart of Maasai Mara National Reserve is blessed with an astounding year-round concentration of animals, rewarding you with wildlife whenever you visit. The Reserve covers an incredible 1,510km2 and serves up the Great Wildebeest Migration, elephant, buffalo, giraffe, lion and cheetah, alongside the migratory zebra and the endangered black rhino. A photographer’s paradise with its breath-taking vistas, the Reserve is also home to Kichwa Tembo Tented Camp, which, due to its situation in a private concession, allows for guided bush walks and night drives, getting you up-close and personal with Africa’s finest. The camp’s 40 elegant tents are Maasai-inspired and allow for luxurious post-safari sleeps under the stars.

Arguably one of the most remote yet striking destinations on earth, Namibia’s NamibRand Nature Reserve seems like something found on Mars, with its sparse, desolate landscapes caked in undulating red dunes. Sat against a backdrop of craggy mountains, Kwessi Dunes is a new lodge with just 12 chalets, each with its own ‘star-gazer’ room, completely open to the sky. Here, it’s not about chasing big game, but rather soaking up the beauty of the kaleidoscopic landscape, and admiring the antelope that pepper the sand. When you’re not on a scenic drive, quad biking, horse riding, or enjoying a hot air balloon or helicopter flight, you can relax around the swimming pool and drink in the vast, open desert vistas. When sun sets, head to the camp fire, and then, by night, lie back and watch the celestial theatre show dance before you. In fact, the NamibRand is Africa’s first designated International Dark Sky Reserve meaning it’s one of the least light-polluted areas in the world – and it shows.

Claiming 15km of the Zambezi River as its own, this award-winning safari lodge is a perfectly serene retreat from which to visit the UNESCO World Heritage Site of Victoria Falls, the largest waterfall on earth. Or, as it’s known in Tonga, ‘The Smoke That Thunders’. With their distinctly African designs, each villa and suite is canopied in the shade of massive riverside trees, giving you the perfect backdrop from which to spot neighbouring elephants, lions, giraffes, hippos and more. 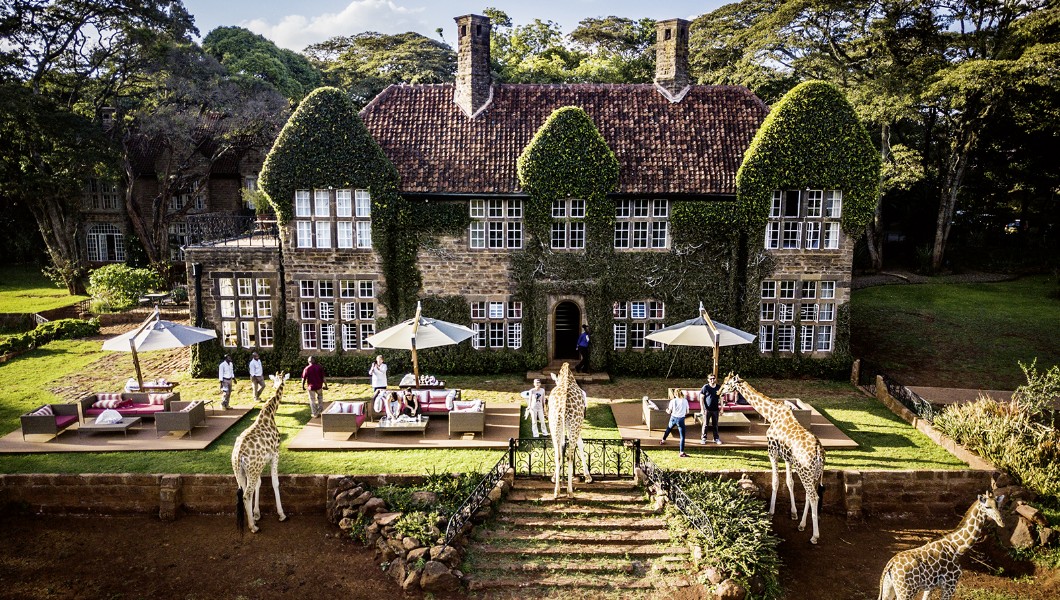 From the Big Five to the Fab Four... The Safari Collection boasts four properties throughout Kenya, each unique in their offerings. Giraffe Manor is the perfect starting-off point in Nairobi that gives guests the most unforgettable bucket-list breakfast in the world with Rothschild’s giraffes; Solio Lodge, in the heart of a private wildlife sanctuary, serves up exclusive game drives that will see you spot both black and white rhino, elephants, zebras, leopards and more; Sasaab, in Kenya’s Northern Frontier District, will let you dip into your plunge pool to watch elephants sip from watering holes just metres way; And Sala’s Camp, with its intimate tented luxury,  is one of the first camps in the Mara to witness the legendary annual migration of wildebeest. A quartet of truly incredible experiences.

If, like us, you’ve been dreaming of a trip to the iconic Okavango Delta, reward yourself with a stay at Tuludi, a camp in the Khwai Private Reserve, that lays claim to 200,000 hectares of pristine wilderness. With floodplains as far as the eye can see, glistening waterways and emerald forests, the landscape is fit for a fairy tale. Here, wilderness and serenity collide in a magical display of nature, in which you get to call  a tree-house-style room your home.

No day will be the same, as every game drive will throw up a new sighting, be it by jeep, by boat or on foot. You can stretch out and watch the wildlife unfold from your sun lounger, swot up on Africa’s diverse culture in the treehouse library, sip sundowners from your private plunge pool, or simply lay back and surrender yourself to the stars in your tented suite. Between mind-bogglingly beautiful sunsets and thunderstorms, your visit will enrich every side of your African experience.

An island of calm in the vast Kalahari, Tswalu The Motse is nestled at the foot of the Korannaberg Mountains and is built of local stone, rich red clay and traditional Kalahari thatch. Understated luxury presents itself through a heated infinity pool surveying the savannah, spacious suites with open fireplaces for just 30 guests, a secluded spa, library and private sun decks that gaze out onto a watering hole with its attendant wildlife. As experiences go, you can seek out black-maned Kalahari lions, cheetah or desert black rhino, soar above the Kalahari on a Tswalu Heli ride, take a guided horse hack or bush walk, sink into the spa, or close your eyes on the Malori sleep deck for a night under the stars. Being spoiled for choice has never looked so good.

The doyenne of African experiences, Singita, the Shangaan word for ‘Place of Miracles’, has 15 award-winning lodges and camps across Africa. Perched high on a sandstone ridge, Pamushana Lodge is the epitome of picturesque elegance, with views over Malilangwe Dam below. Set within Malilangwe Wildlife Reserve’s 130,000 acres, Pamushana fits into the natural fabric of its surrounds, decked out in thatch, stonework, natural fabrics and bold geometric patterns. With just eight suites, including a three-bedroom family suite, each one features a private plunge pool, while nights under the stars play out with a cliff-top firepit.  The reserve itself has one of the highest concentrations of the endangered Black Rhino, so spotting one of those will let you be part of conservation history.

One of the most beautiful properties in South Africa’s Kruger Park, Royal Malewane exudes the romance and beauty of a bygone age while offering every modern comfort. There are two lodges – Main Lodge, which is more classic and grand, and The Farmstead, which is more contemporary and intimate. Boasting the ‘most qualified guiding team in Africa’, Royal Malewane offers guests  a classic safari experience spotting The Big 5, while bush walks or photographic safaris are also on the agenda. Nightly feasts under the stars will sate post-safari appetites, while the award-winning spa has private casitas for sublime al fresco treatments around the pool and a more tranquil take on walking on the wild side.