Boston strong: The John Adams Presidential Suite is one of the finest in America

The John Adams Presidential Suite might not only be the most luxurious suite in the city, but possibly along the entire East Coast. Joe Lipscombe made his pilgrimage to the East Coast and encountered the extravagant abode at Boston Harbor Hotel

If you’d never been to the United States of America and were searching for a soft landing, you’d look no further than Boston. The smallest ‘Big City’ in the country, a short hop north of New York, is innately un-American in looks, yet carries more history than any other place on the map. Boston is a stunning portrait of America’s past, dripping with stories of the birth of a super nation. Rich red cobblestone streets lead to moments of the utmost significance, including the Revolutionary War and the battle for independence from the British. To walk through Boston is to walk through time.

In contrast, by feel, Boston is one of the country’s most forward-thinking and progressive cities, housing globally renowned education institutions such as the Massachusetts Institution of Technology (MIT), and Harvard University. This environment helps bring together innovators, creators, academics, history buffs, and knowledge-hungry students from around the world, along with energetic tourists like me to make up the numbers.

And it’s not just academia that plants Boston on the world stage – it has an incredibly rich and diverse arts scene, and a fairly unrivaled sports history, which includes the likes of the five-time Super Bowl winning Patriots, the most celebrated basketball team in the NBA, the Celtics, the famous Red Sox and its beautiful home, Fenway Park, and the USA’s oldest and most famous jog – the Boston Marathon. In a word, Boston is historic.

Of all the stunningly quaint and historic architecture that draw the skylines of Boston, there’s one piece that stands alone at the foot of the harbour, and that’s where I am fortunate enough to be staying. Rowes Wharf is a centerpiece of civic celebration in Boston – a dominating red brick Tetris block of a building, with an unmistakable hallow arch sucked from its middle, connecting the city of Boston with the water beyond.

The Boston Harbor Hotel makes up but a portion of Rowes Wharf – some 232 guestrooms between floors 8 and 16 – as well as the basement, ground floor lobby, and first floor restaurants. My introduction to the Boston Harbor Hotel bears mentioning. Like entering a sailing club of well-earned prestige, it’s an eloquent mix of nautical regalia and prim hotel mainstays in the form of a top-hatted concierge, marble flooring, and flower arrangements that give off a slightly political office vibe – but in a classy way. And much like the city of Boston itself, each twist and turn throughout the sprawling lobby tells a wonderful story. 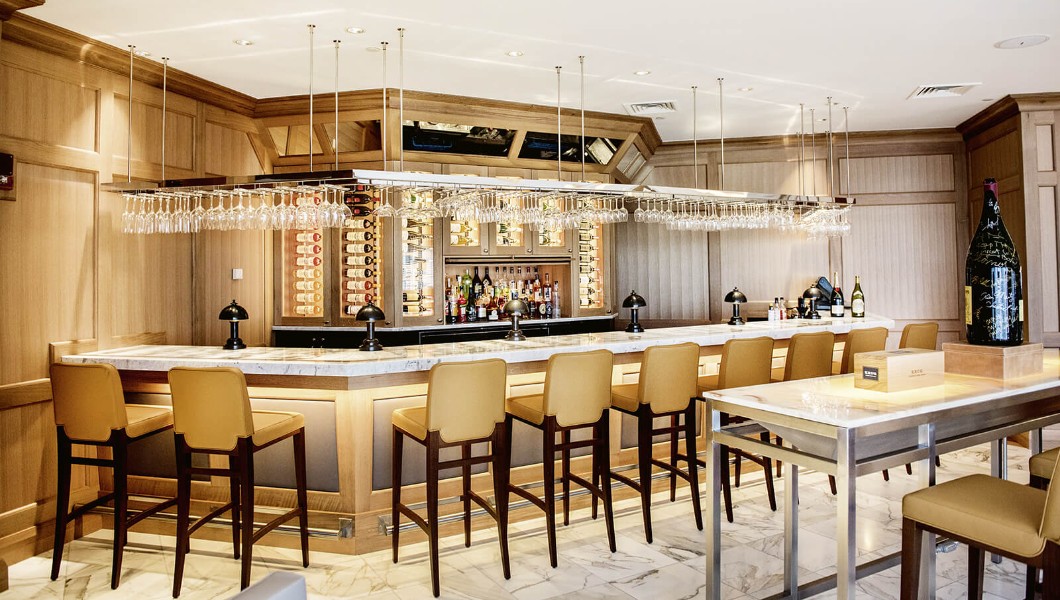 Cartographers and historians are in for a real treat (and I happen to have a thing for maps), as it plays museum to a remarkable collection of maps from wandering centuries in New England. This collection was owned and donated by the late Norman B. Leventhal, a Bostonian legend who sadly passed as recently as 2015 at the ripe age of 97. Mr. Leventhal co-founded the construction company that was responsible for a healthy list of major civic improvement projects in the city – one of which was the Rowes Wharf building itself – and displayed his prized map collection inside the walls of the hotel as a way of improving the understanding of the story of Boston and its settlers.

His map collection is one of the finest depictions of the story of New England’s development there is, and is set out in three chronological sequences for guests to follow. And follow I did, for a while.

But Mr. Leventhal’s map collection, and the Boston Harbor Hotel’s incredible welcome is merely a warm up for the surprise that awaits me. Now, depending on where you are along the coastline of Boston, you can most likely see the brilliant Rowes Wharf from afar due largely to its stunning bay window centerpiece overlooking the expanse of water beyond. But what most of these onlookers won’t be aware of is that behind that shield of glass now lies not just Boston’s most incredible hotel suite, but in all likelihood the East Coast’s most incredible hotel suite: The John Adams Presidential Suite.

The John Adams Presidential is a remarkable hotel suite for a number of reasons. Not only is it stunningly beautiful in design and décor, but it’s a success story of architecture, too. The huge bay window in question – and I mean huge, it’s 20 feet tall from floor to ceiling – was once a wall that made up the far side of a public function space called the Rotunda. The Boston Harbor Hotel decided however that this obstruction of the harbor would be no more and set about removing a whopping 200lbs of block cement to open up the most spectacular terrace view I’ve ever seen. Now, no matter where you are in the main living space of the suite, you have uninterrupted views of Boston’s beautiful waterfront. If you’re lucky enough to be in Boston during the New England spring or summer, you’ll be able to step beyond the window onto the 1,000 square foot terrace and enjoy your own rooftop garden. The hotel also tells me it’s possible to have fireworks rocketed from the balcony if you purchase the ‘Engagement Package’.

With such an impeccable view, one could be forgiven for forgetting to look inside – but do so at your peril. The John Adams comes with its own fully stocked, white marble bar (not mini-bar, bar-bar, with top shelf brands and a wine collection), with an adjoining kitchen a Manhattan penthouse would be jealous of. Beyond that, there’s a state-of-the-art media room, and two marble and mosaic white kitted bathrooms. For the amenities, the Boston Harbor again goes one step beyond. It employs an exclusive BVLGARI Eau Parfumee collection, which is sent to the guest’s home in advance of their stay so they can test and confirm which scent of choice they prefer. The suite is then stocked with that scent for the duration of their stay. And to add even more petals to the pile, a matching candle is made and sent to their home after checkout so they’re beautifully reminded of their visit long after.

The marina-chic theme continues into the bedrooms – two of which come with the suite as standard, but more adjoining rooms can be added if your entourage is particularly beefy. With this, more entrances are added, the total of which being eight unique ways in and out of the suite. And there’s no need to bring attention to your party if you do not wish to – the Boston Harbor Hotel offers a private elevator for John Adams guests.

With respect to the rest of the hotel, the John Adams Presidential Suite sits apart from its other rooms

Though, this lavish hospitality never reaches obnoxious. There’s no hint of new money – the welcoming warmth of the Bostonian exterior is evident through the subtlety of the design and attention to detail. Things aren’t thrown into the suite on a whim for effect – the designers have created a masterpiece of furnishing through acute attention to detail, from where furniture groups throughout the 4,800 square foot space are facing, to the choice of fabrics and materials planted around the more intimate areas, such as the bedrooms and wardrobes, giving it a real residential feel.

But these touches are luxuriously bordered by a set of stunning talking points to entice the type of guest that’s carrying $15,000 in spare change to pay for it. Executive Chef Daniel Bruce creates a five-star personalised menu for guests of the suite, who can dine in lavish style beneath a striking crystal chandelier, or propped up against the bar in front of the TV. 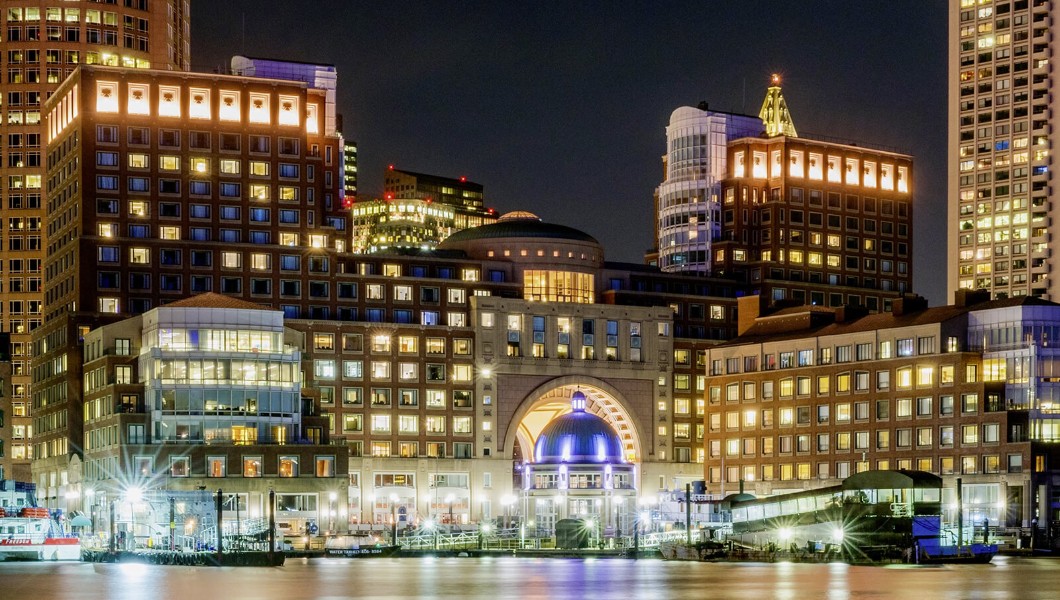 With respect to the rest of the hotel, the John Adams Presidential Suite sits apart from its other rooms and amenities. It’s probably fair to say no hotel, no matter how luxurious, could comfortably host such a suite, but the Boston Harbor Hotel does a fine job. Though built of course for the extremely affluent, due to its architectural triumph as the centerpiece of the entire Rowes Wharf building, it plays a crucial part in what makes the property incredibly special, whether you’re staying in the suite or not. I know this for sure because I fell in love with the John Adams Presidential Suite and I stayed in a deluxe double on the ninth floor.

WHAT: The John Adams Presidential Suite