It’s a Jumeirah hotel, but not as you know it: the launch of Zabeel House Al Seef by Jumeirah ushers in a new era for Dubai’s hospitality giant and Steven Bond explored the surprising Creek-side pearl

Jumeirah has well and truly conquered Dubai’s coastline with a string of five-star favourites within Madinat Jumeirah and its surrounding area – a luxury campus of sorts, comprising impeccable hotels, decadent retail and the finest of fine dining. Now, after opening a spate of hotel openings in Europe, East Asia and the Maldives, the hospitality powerhouse has set up shot where it all began, launching its new Zabeel House brand on Dubai’s historic Creek.

The box fresh Zabeel House Al Seef by Jumeirah sits adjacent to Zabeel House MINI by Jumeirah, which opened its doors just a few weeks prior, just as things are (quite literally) hotting up in Dubai. But just like the cooling Arabian windtowers that were once commonplace at the mouth of the Creek, the uber-contemporary lifestyle hotel is the perfect refuge for a gamete of travellers, including fly-and-floppers and the staycation crowd, such as myself. It's a well-worn cliché, but this truly is affordable luxury.

The approach to the hotel winds you past and older iteration of the Dubai you see in the promotional videos – bustling retail with more of a South Asian twist, older malls and vibrant, eclectic street life that seems a world away from Dubai Marina and Downtown. This is Dubai, it’s just another flavour. Within a stone’s throw from a cluster of consulates, with a variety of flags flapping in the breeze, the entrance lobby sits at the side of the blocky, modernist building (eerily reminiscent of university campus buildings in the UK) and guides you past a row of quaint bicycles and an art installation that quite literally welcomes you; life-size human sculptures that gesture the way toward the check-in desk.

At the risk of overloading the hyphens, the entire reception area is an open-plan, always-on lounge-library-café. It borrows from the W Hotels school of active lobby lounges and echoes other recent lifestyle hotel openings in the city, where people come to chill, study and conduct business in the peaceful surrounds of ‘Chapters’ – and without forking out excessive prices for a caffeine boost. The art theme continues with an abstract art display called the ‘cityscape’, which portrays the city’s transformation and a bank of stereos that adorn the reception desk. Beyond a lofty set of bookshelves lies Nyon, the hotel’s primary eatery, with a mix of Mediterranean and Middle Eastern cuisines, buffet or a la carte for breakfast, lunch and dinner.

Other venues include Skafos, with a bounty of seafood and (soon to come) shisha pipes, with an unrivalled vantage point directly over the water, where you can take in the sights and sounds of the Dubai Creek through plumes of flavoured smoke and the not-so-distant melodies of calls to prayer reverberating over the water. Then there’s Sol, a ‘sky bar’ that complements the small but perfectly formed rooftop pool, also providing incredible views of both the Creek on one side, all the way to the Dubai Frame, which handily provides a reticule through which you can gaze across to ‘New Dubai’. While lacking shade, the shallow pool is enough to keep you cool while you wait for your order of seafood tacos and mojito, or whatever takes your fancy – the chef is incredibly accommodating. 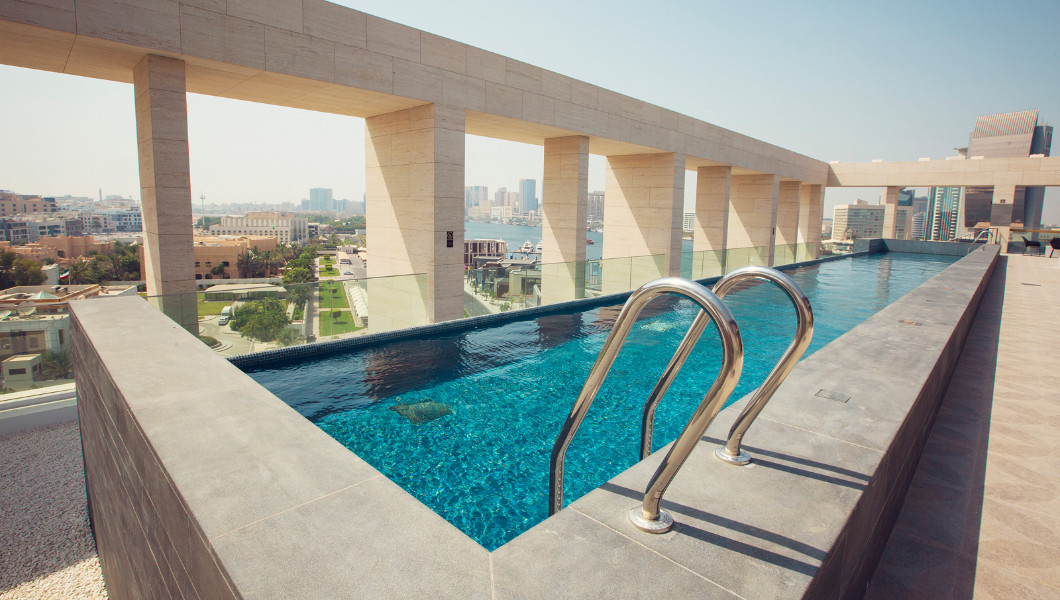 Sometimes three options are all you need and, in this case, that’s all you’ll get: the Popular, the Plush and Suites. The contemporary retreats balance a sense of energy and comfort with oak dining or work tables, minimalist wardrobe spaces, hammocks for lounging on when reading, contemporary art on the walls and ceilings inspired by Dubai and decent sized tubs for a relaxing soak – complete with eco-friendly amenities by OSME – as well as handy freestanding SMEG fridges (a mini bar equivalent), N’espresso machines and a SuitePad, useful for late-night food orders or making plans for city exploration. 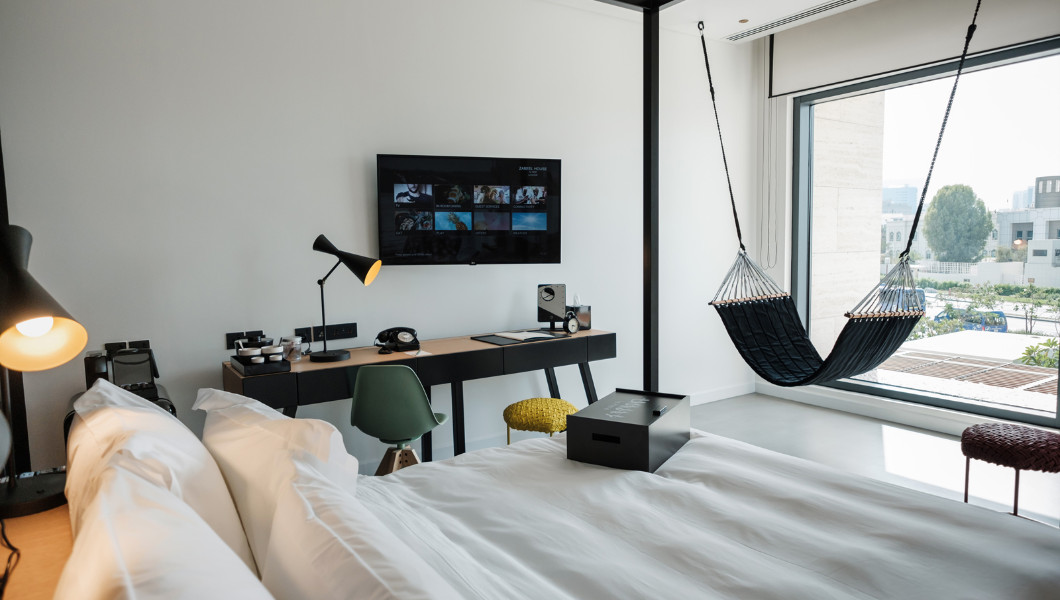 Take note of the quirky details also; can you spot the astronaut clinging the moon-shaped lamp, or the word-search above the bed? The workout area is also comprehensive, stocked with a huge range of Technogym machines and freeweights. It’s actually streets ahead of many so-called five-star hotel gyms I’ve reluctantly accessed in the past. And with an upcoming spa opening, the hotel can also boast its availability as something of a wellness haven, particularly with so many organic ingredients in the F&B venues.

If you’re familiar with Dubai destinations such as Box Park, Last Exit and La Mer then you’re experience the handiwork of Meraas. And the UAE-based developer has done exceeded expectations once again with an incredible stretch of eateries and retail spaces that fan out from the hotel and across a nouvea-historic neighbourhood replete with artisanal coffee joints, shisha hangouts and a few licensed venues to boot. Truth be told, the grand total of 90 restaurants and 350 retail outlets might seem like overkill, but the neighbourhood should hold a wide enough appeal for the surrounding suburban areas, families and hip expats keen to upload snaps of their kale salad / macha latte / etc.

All of the above can be handily accessed from the twin Zabeel House properties and pedal power is paramount, with a range of bicycles available form the hotel. While the venues may be a little docile over the stifling summer months, there’s likely to be a grand launch in the new year, if not sooner, legitimising the area on the map – but all of the true hipsters and early adopters should get there fix before the winter throngs trickle through. It’s also an Instagram treasure trove while the micro-neighbourhood remains a hidden gem – but that surely won’t last long. Our advice is to beat the heat and get ahead of the crowds and enjoy the serenity of the Al Seef area while it remains a hidden pearl. When you consider the humble ‘barasti’ huts that’s once lined the Creek, Zabeel House Al Seef by Jumeirah is a testament to Dubai’s relentless march into the future.