From revolutionary history and boldly painted churches to mezcal tastings and a host of new luxury hotels, San Miguel de Allende is one of Mexico’s most intriguing cities

White herons fly past us in a V-formation. They’re moving fast, much faster than our peacefully drifting hot air balloon, but our easy pace feels like the right fit for such an easy-going city as San Miguel de Allende.

Captain Gerardo Benitez, aka ‘Lalo’, releases another blast of flame, lifting us higher,  650 metres above the city’s historic centre.  “The colours of San Miguel are so beautiful,”  he says, picking out the pink spires of the iconic Parroquia (Parish of San Miguel Arcángel),  the peachy tower of the Oratory, and the yellow dome of the Iglesia de la Inmaculada Concepción, known locally as ‘Las Monjas’.

San Miguel de Allende, in the central Mexican state of Guanajuato, is frequently singled out as the most beautiful city in Mexico or in Latin America. Listed as a UNESCO World Heritage site in 2008,  it was also honoured in 2019 as the American Capital of Culture. But it’s not just the colourful streets and colonial-era architecture that make San Miguel ‘the heart of Mexico’. Lalo reminds us: “Here is where the Mexican Revolution started.”

The city was originally established in 1555 by the invading Spanish and later became an important stop on the country’s Silver Route. By the mid-1700s, it was one of the largest, most prosperous cities in ‘New Spain’, with grand colonial houses and churches.

Several of the city’s hotels now occupy the colonial buildings. Belmond Casa de Sierra Nevada, for example, takes up five historic buildings a couple of minutes uphill from the Parroquia, the Casa Principal, which dates back to 1580, the former home of a bishop. We stay across the road at Casa Limón, whose peaceful, secluded courtyards contain trickling fountains, vine-coated walls, lawns and a heated swimming pool. 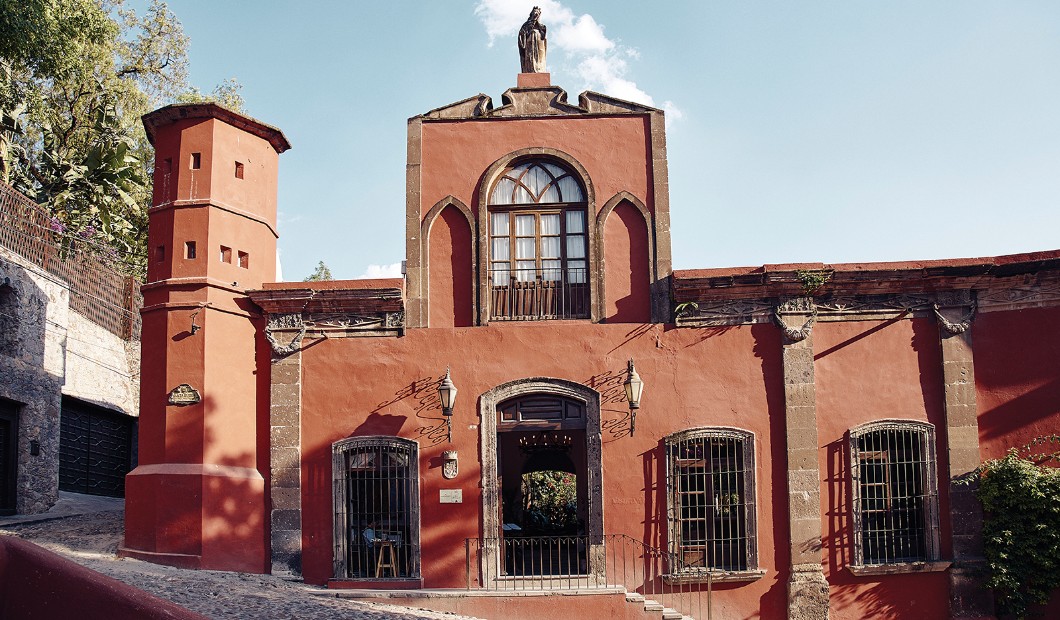 The elegant, spacious room we stay in also has  a classic feel, with terracotta floor tiles, an old stone fireplace, a writing table and regal blue rugs and armchairs. Each morning, we eat breakfast, including Huevos Enmoladas (eggs, tortillas and beans with a dark chocolate-chilli mole [sauce]), in Casa Principal’s courtyard, next to a soporific wall fountain, a Botero reproduction hanging nearby. 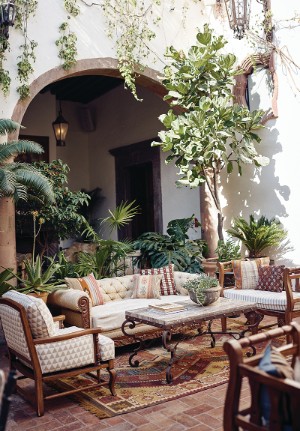 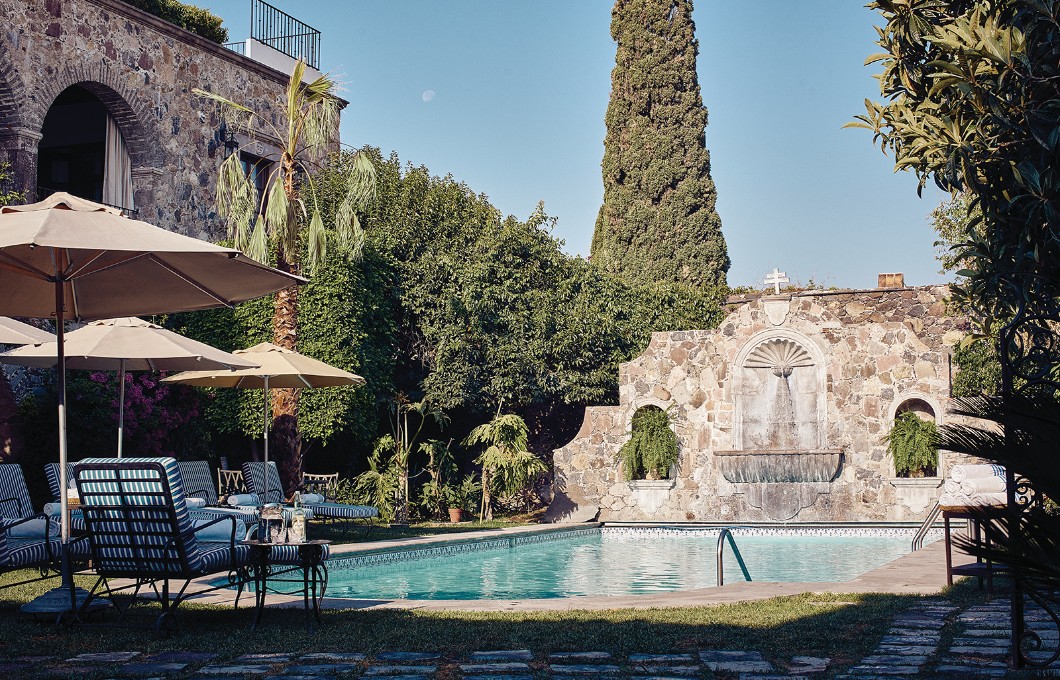 We also go for dinner one evening at Andanza, the hotel’s cosy restaurant, decorated with candelabras and ring-shaped chandeliers, enjoying a falafel salad, caramelized onion tarts, and fried shrimp with asparagus, along with a bottle of Belmond’s own blended red wine from Mexico’s renowned Guadalupe Valley.

As well as major luxury brands, there’s a trend across the city for small, boutique hotels. We spend a couple of nights at Dôce 18, a modern arty hotel with just 10 rooms and one of the city’s best locations, less than a minute’s walk from the central plaza where mariachis perform each evening. There’s a bright, clean feel to the room we stay in, with white floor tiles, white walls and large white lampshades, like Chinese lanterns. Large square landscape photos hang on the walls. From our balcony, we can look out across the rooftops to the dome of San Francisco.

Breakfast is served each morning in the interior’s terrace, dishes, such as Huevos Divorciados (eggs and corn tortillas with green and red salsas), prepared by a chef behind the Art Deco bar. There are quiet, white lounges too, one containing  a grand piano, and a white rooftop deck with  a small swimming pool.

Early one morning, we’re driven to the east side of San Miguel for our dawn balloon ride, booked with Coyote Canyon Adventures. As the sun comes up, we drift over colourful suburban houses, vineyards, lakes and as close as the wind allows to the historic centre. “The perspective of San Miguel from  a balloon is so different,” Lalo says. “You can really appreciate the colours, especially at sunrise.”

San Miguel de Allende was previously San Miguel El Grande, the city changing its name in 1826 to pay tribute to the Independence hero Ignacio Allende. Along with Miguel Hidalgo, Allende, originally a captain in the Spanish army, led the 1810 rebellion against the Spanish, with San Miguel the first Mexican city to gain independence. Walking up Relox street towards the central plaza on our first morning, we pass a basement used by Allende and co to plot the revolution. It’s now an ice cream shop.

Allende was caught and executed in 1811 by the Spanish, the Mexican War of Independence won  a decade later. A statue of the revolutionary leader now looks out over the main plaza, where locals gather under the shade of banyan trees. The plaza’s dominated by the pink and grey limestone Parroquia, the most important building in San Miguel de Allende. Originally constructed in the 17th century, a mix of Gothic and Barroque architecture, its bells regularly ring out across  the city.

From the plaza, we make a loop of the centre, passing the Church of San Francisco and through Solitude Square, where art students sketch the Church of Our Lady of Health. San Miguel’s a great city for walking, with cobbled streets and buildings painted from a vibrant, autumnal palette (yellows, orange, browns, reds…), and striking wooden doorways. I circle around to the bright yellow Centro Cultural Ignacio Ramirez ‘El Nigromante’, an 18th-century convent containing an abstract mural by Mexican artist David Alfaro Siqueiros. 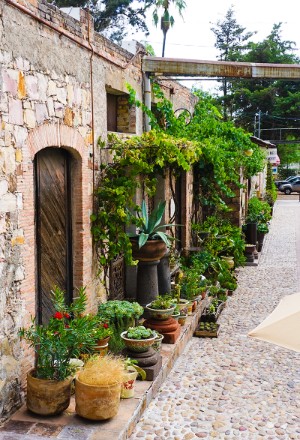 With a history of resident artists, such as Siqueiros and acclaimed Filipino painter Romeo Tabuena, San Miguel de Allende has a reputation as an ‘art city’. After World War II, the GI Bill in the US also allowed veterans to study art abroad,  with San Miguel de Allende a popular choice. The city’s streets now contain dozens of galleries, exhibiting work by artists from Mexico, the US and around the world.

But the epicentre is Fábrica la Aurora,  a 15-minute walk from the centre: a former textiles factory now containing more than 60 studios and galleries, from abstract paintings and surreal sculptures to antiques. “Something about the city draws artists to San Miguel,” Cindy Herrera says, showing me around Galeria Skot Foreman’s artworks by Romeo Tabuena, Andy Warhol and Mexican artists, such as Leonardo Diaz. “It has  a certain kind of magic. You see colours. You can smell the history in the streets. You can explore galleries and discover new things you weren’t expecting.” San Miguel’s popularity is transforming the city. “San Miguel became known by word-of-mouth,” Herrera tells me. “Now, there are a lot of new galleries, new restaurants, new hotels.”

Of the city’s many hotels, one of the newest is Live Aqua Urban Retreat, which opened in 2018. It’s a 10-minute walk from the Parroquia, with 153 rooms and a 30-metre swimming pool set in the garden’s wooden decking. A giant head sculpture by Mexican artist Javier Marin rests at the entrance. Within the modern hotel’s white corridors, there’s a quiet courtyard with potted maguey plants.

Our sleek, still-shining room has a red brick ceiling, wooden floors, and black and white photos from around San Miguel de Allende. A record player with vinyl (Phoenix, Paul McCartney, Santana…) is a cool touch.

The hotel has two restaurants, with an international menu, from tacos to lobster tail,  at Zibu Allende and a Pan-Asian mix at the upstairs Spice Market, which has an outdoor deck with lanterns, a golden Buddha statue and a DJ playing. There, we share steamed edamame, spicy Tom Yang Gung soup and miso-glazed sea bass. There’s even spice in the desserts, including orange ice cream with five spices.

Rosewood San Miguel De Allende is another of the city’s recent additions. It’s located next to Parque Benito Juarez, with 67 rooms, extensive gardens, tennis courts and a 25-metre-long swimming pool. The San Miguel influence is clear in the colonial-style courtyard and fountain,  and walls boldly painted in orange, pink and yellow.

Inside our smart room, there’s a writing desk,  a fireplace and a comfy brown and yellow sofa.   An artist’s easel and a set of oil paints have also been set up on our terrace to encourage a little  ‘San Miguel’ creativity.

Luna, the hotel’s rooftop restaurant, might have the best view in the city. We choose pizza with smoked tuna and pesto from the laid-back menu and take in a sunset panorama that stretches from the Sierra Guanajuato peaks to the west across the colourful domes and towers of the city, including the illuminated Parroquia.

On our second night, we eat downstairs at 1826, a refined dining room serving international dishes, such as ravioli with spinach and ricotta, but with  a clear Mexican influence in plates like braised beef rib in Mole de Olla.

Before dinner, we have a mezcal tasting in the Rosewood’s Citrus Courtyard. Like tequila, mezcal’s a traditional Mexican spirit, but it’s more varied; whereas tequila comes from one type of agave, mezcal has more than 40 agave varieties. Over two hours, we sample some of the country’s best mezcals, including Las Garrafas and Clase Azul, paired with small dishes, from red snapper ceviche to chocolate. “The flavour of mezcal can change with the food you eat,” sommelier Bernardo Sanchez explains. “It can bring out the sweetness, bitterness or smokiness of the mezcal.”

Our final base is Dos Casas, a Design Hotel with 12 rooms within two 18th-century colonial houses. Lounges are decorated with black and white photos of Mexican figures, such as artist Diego Rivera, while our room has industrial grey walls,  a neat yellow sofa and novel suspended discs for bedside lamps.

Down in the courtyard, the hotel’s restaurant, Áperi, is one of the foodie city’s best, with French-Mexican chef Olivier Deboise’s inventive menu heavy on local, seasonal ingredients. We share creamy burrata with tomatillo sauce and a fresh-tasting shrimp tartar. Deboise’s ravioli fuses Italian with very Mexican ingredients huitlacoche and epazote, while the trout with baba ghanoush  is perfectly cooked. The sommelier recommends a bottle of Cabernet Sauvignon from Chihuahua, one of the best Mexican wines I’ve tried, helping make this the most memorable meal we have  in San Miguel. 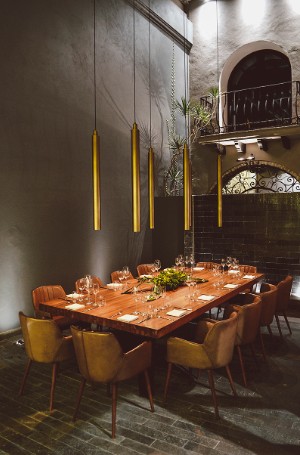 The same company (www.levainco.com) behind Dos Casas and Áperi also owns several artisanal bakeries across the city. Early on our last morning, we make our way south of the centre for a baking lesson at Panio Atelier du Pain, where we knead bolillo (Mexican bread rolls) and roll croissants into neat little shell shapes.

“You have to make bread with love,” French baker Michel Caes encourages us, as we prepare dough for baguettes. We make quick slices in the tops with a razor, then use scissors to cut each baguette  to look like an ear of wheat. 15 minutes later,  our baked creations cool on a tray: crunchy,  golden and beautifully browned. In a city with many colourful artworks, they might not be masterpieces, but they do look pretty good.