From Sicily to Ras Al Khaimah... Four new resorts to help you plan your summer escapades 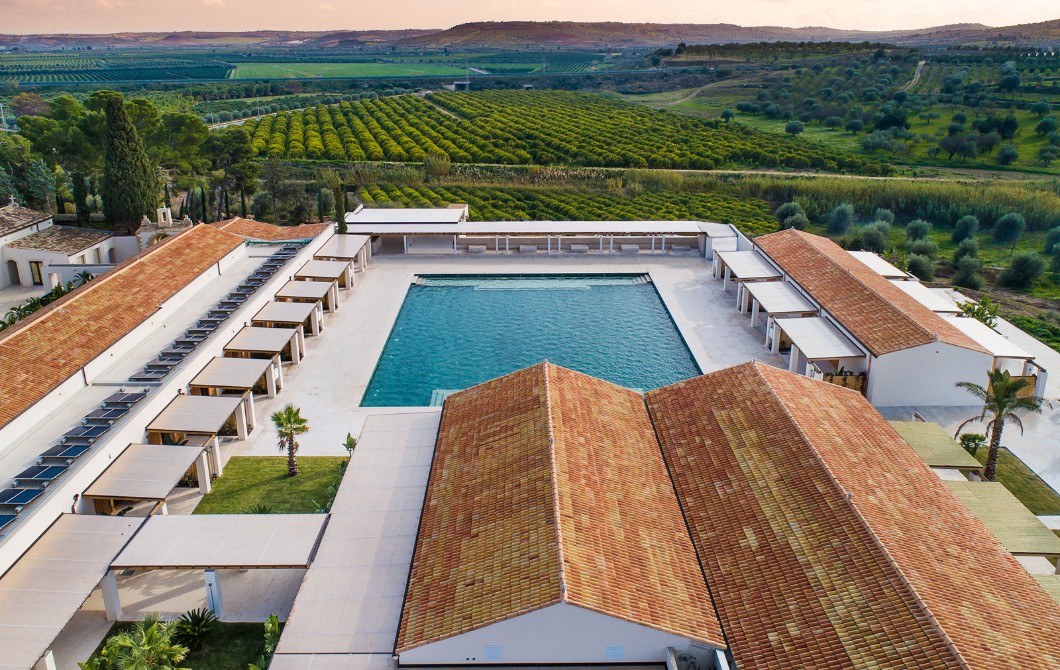 An ancient Sicilian farmhouse once owned by Italian royalty emerges from a three-year transformation this month as Il San Corrado di Noto, a boutique all-suite resort in the UNESCO World Heritage Site of Val di Noto. The 26 suites and eight pool villas provide a harmonious blend of traditional and modern, with outdoor patios surrounded by ancient citrus and olive groves and private pools in the one- and two-bedroom villas. 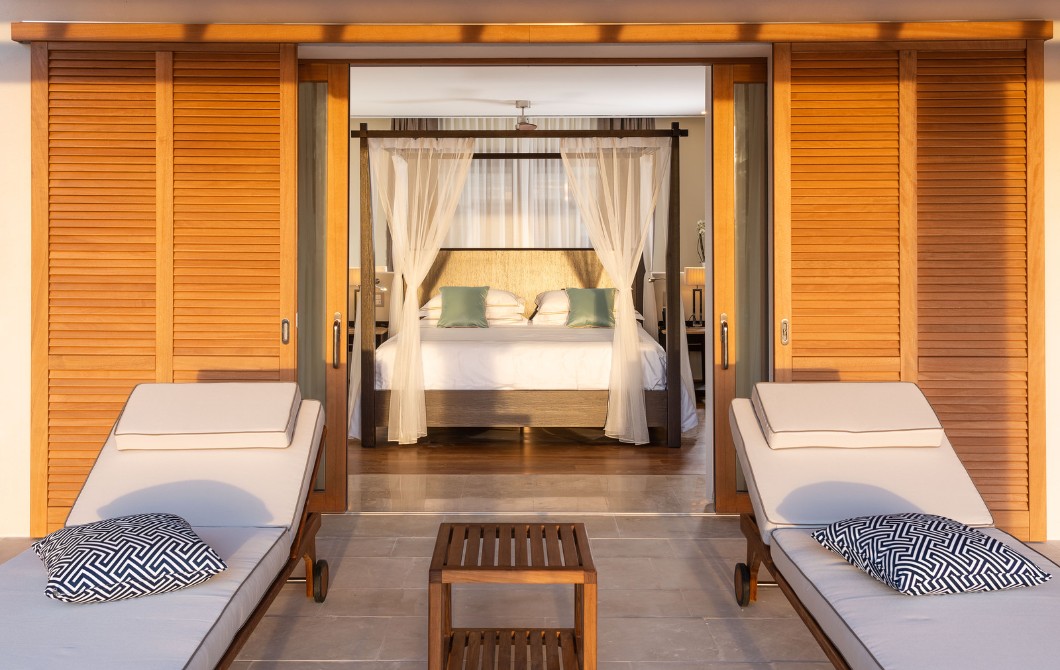 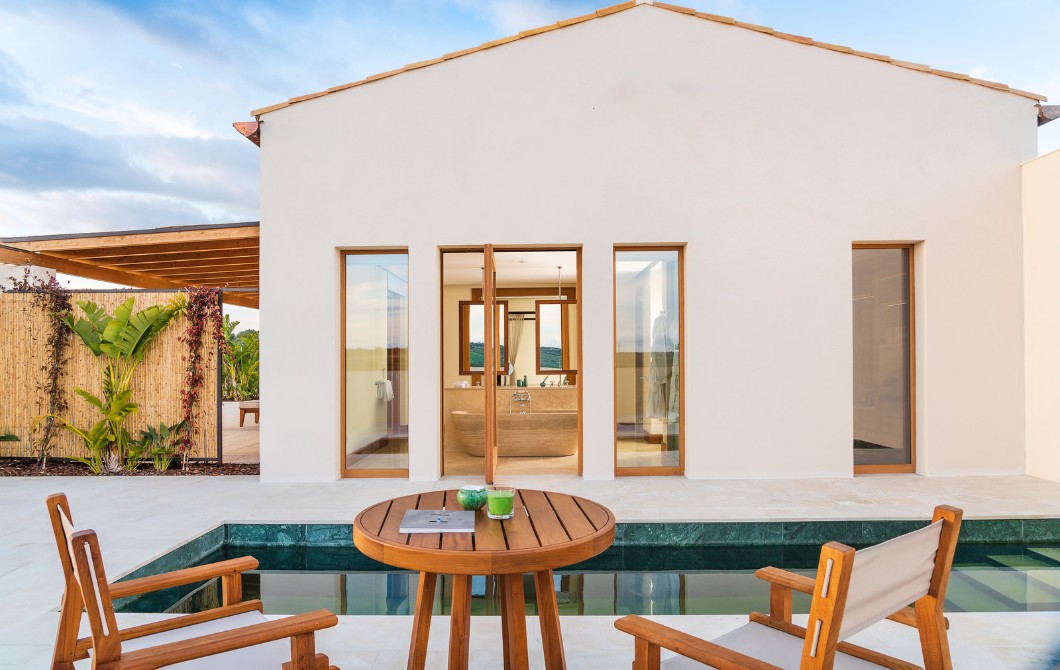 During the renovation, architect Corrado Papa restored the property’s 18th-century architecture and preserve the important heritage features of the building, including a chapel that dates back to 1836, yet the finished produce looks every bit like a contemporary country hideaway. Natural materials including Modica stone and Guatemalan marble have been used throughout the suites and public areas, which include two signature restaurants: Casa Pasta and Principe di Belludia. In the summer months, the resort operates a private beach club, a short drive from the hotel, and closer to home, Il San Corrado di Notos’ 100-metre heated swimming pool is one of the largest on the island and one of two at the hotel. 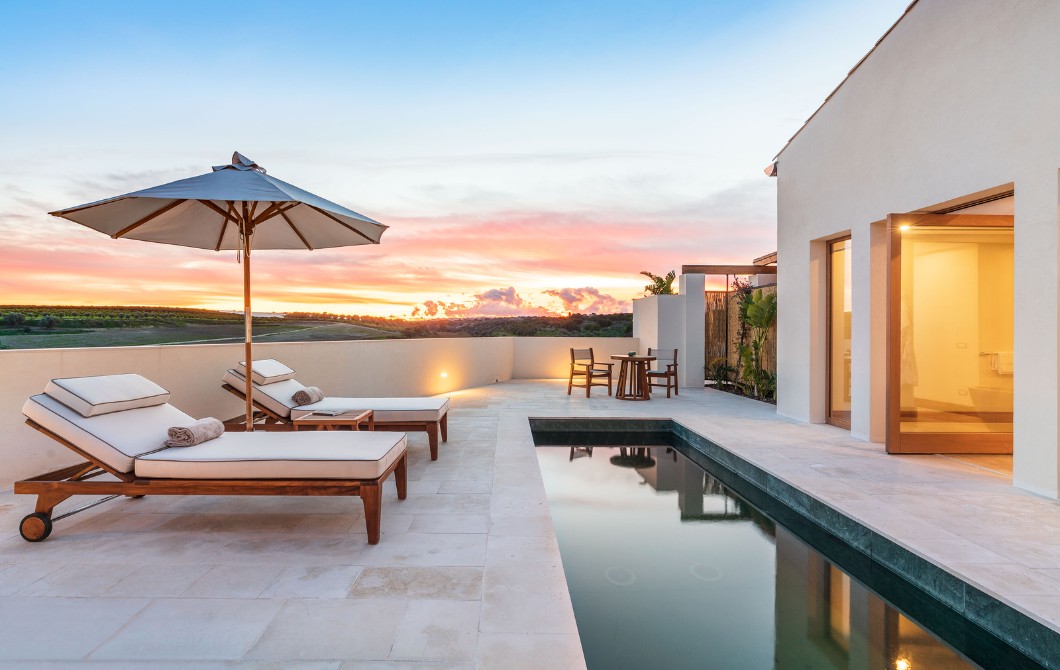 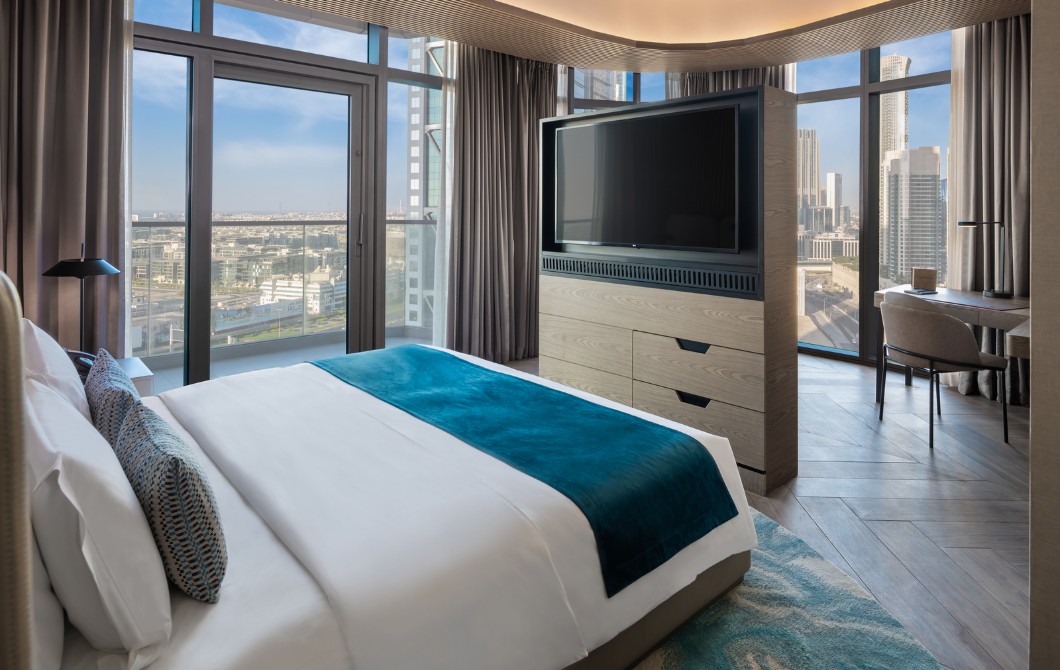 Two years after the world’s first Paramount hotel opened, the company has called “action” on a second Dubai outpost: Paramount Hotel Midtown. Like its predecessor, the Business Bay hotel taps into the 110-year history of Paramount Pictures and celebrates the glitz and glamour of Hollywood, with 281 movie-inspired rooms and suites including Scene Rooms, A-List Suites and the penthouse Paramount Suite, all with balconies looking out towards the Dubai skyline and Burj Khalifa. 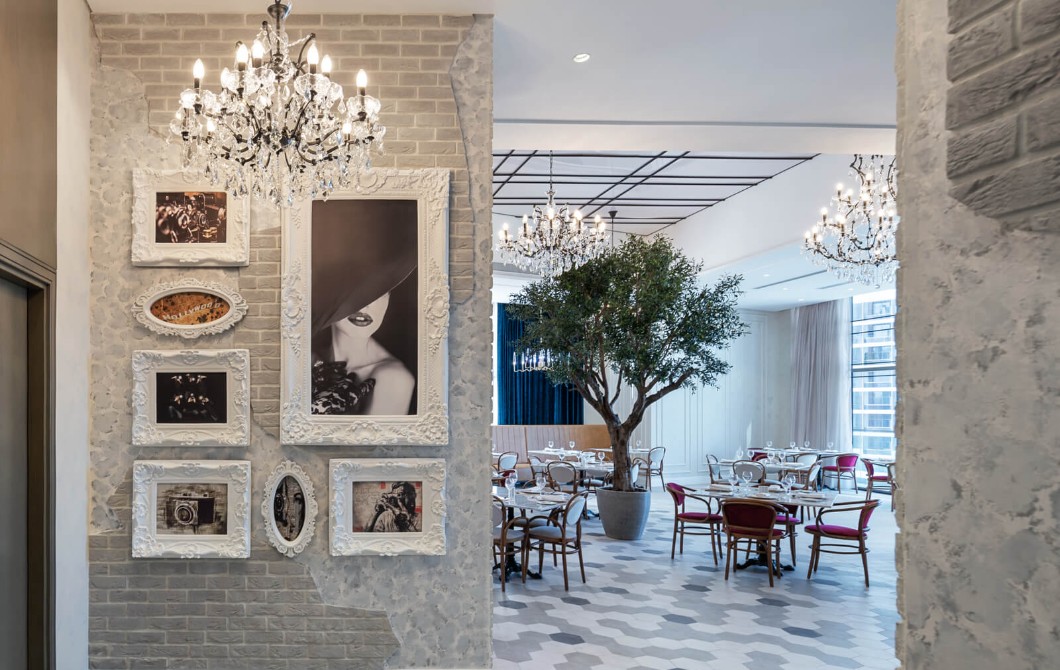 The Hollywood homage continues in the hotel’s dining venues, with Paparazzi Tuscan, Cinescope and Melrose Bar & Lounge, while the rooftop Malibu Sky Lounge and Bar will be a see-and-be-seen hangout for movie buffs. Junior cinephiles are kept entertained at The Kids Studio Club, where a menu of cinematic experiences awaits, and the PAUSE Spa has everything you need to prepare for your big screen debut. Created in partnership with French brand Château Berger, the spa offers a menu of massages and skincare treatments, while the PAUSE Fitness Centre is packed with state-of-the-art health and fitness equipment to keep you in tip top physical condition.

IHG makes its Ras Khaimah debut this month with an elegant beachfront escape on Hayat Island. Inspired by the emirate’s varied topography of mountains, desert and sea, the 351 ocean-facing rooms, suites and private pool villas embrace the concept of space: large windows frame and grand ocean vistas, while interiors reflect the natural hues of sea, sky and desert in a palette of blues and earthy tones. The 150-square metre One-Bedroom Private Pool Villas are some of the biggest at the resort, complete with private terraces and daybeds for space and privacy, while the Presidential Suite offers a sprawling 200 square meters of indoor-outdoor living. 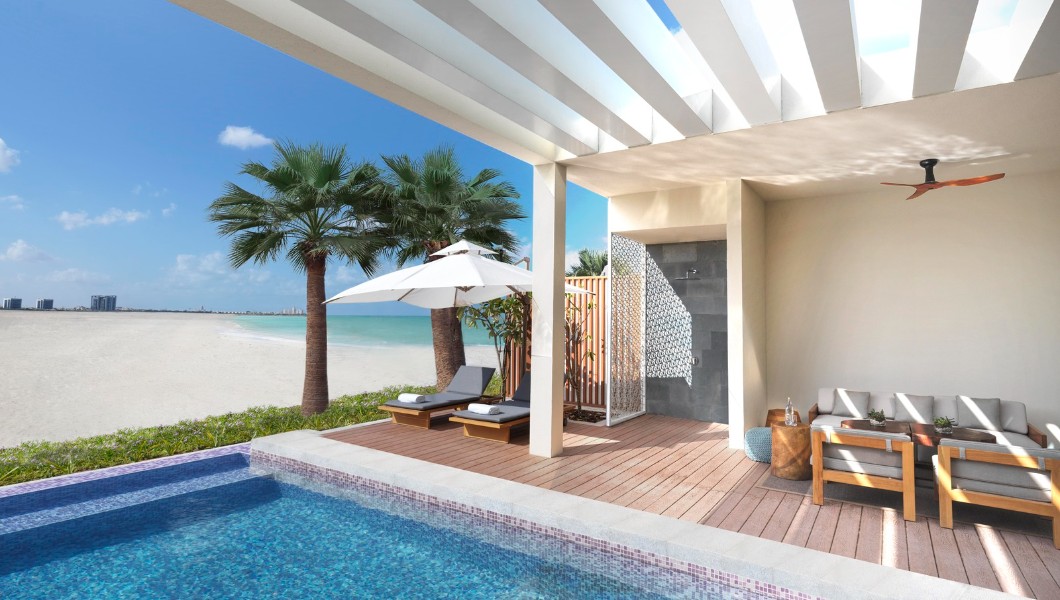 Club InterContinental Lounge offers a raft of benefits for Club guests including breakfast, afternoon tea and evening cocktails, and has its own dedicated check-in area and swimming pool. Modern Levantine cuisine is the star of the show at Levant & Nar, which has an outdoor terrace and firepit, while NoHo evokes the artsy vibe of New York’s North Houston neighbourhood. As well as being the first InterContinental resort in the emirate, the new property is a meaningful addition to the IHG portfolio for Haitham Mattar, managing director for India, Middle East and Africa, who served as CEO of the Ras Al Khaimah Tourism Development Authority from 2015 to 2019.

The Vietnamese island of Phu Quoc is a tropical paradise covered in 314 square kilometres of UNESCO World Biosphere Reserve rainforest fringed with white sand beaches. At the southwestern end of the island, Regent Phu Quoc opens its doors this month, welcoming guests into a beachfront hideaway where health and wellness take centre stage. Bangkok-based BLINK Design Group created the 176 suites and 126 pool villas, which range from one-bedroom suites to remarkable seven-bedroom ultra-villas. The resort layout is inspired by traditional Vietnamese architecture, which makes use of small interior courtyards and covered indoor-outdoor living areas throughout. 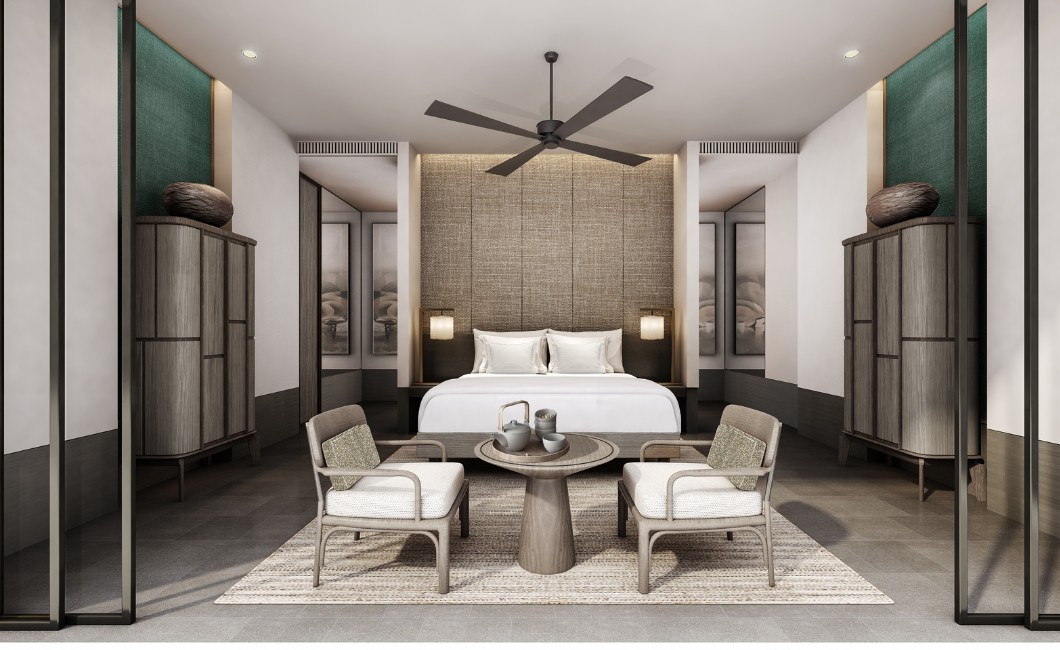 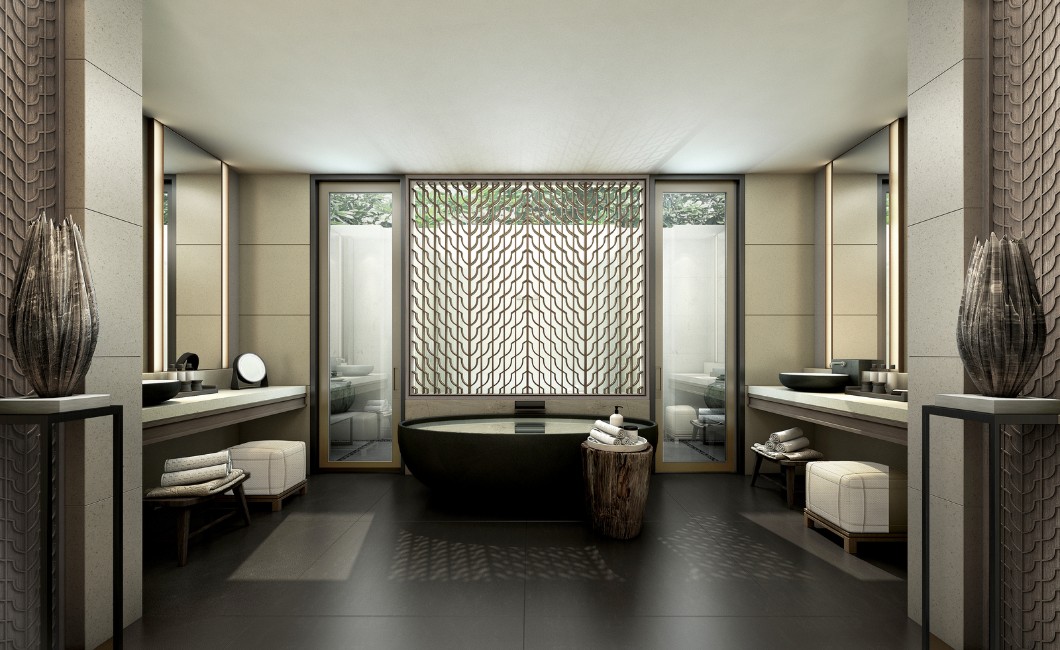 The Spa at Regent Phu Quoc is a sanctuary of wellness where traditional treatments complement modern techniques using state-of-the-art Gharieni equipment, including acoustic/vibrational therapy and psammo hot sand therapy. The Spa is also home to a Bastien Gonzalez Pedi:Mani:Cure salon and treatments by Biologique Recherche, as well as a Health Club with fitness centre, meditation studio and rooftop yoga pavilions. Traditional Vietnamese cuisine is served all day at Rice Market, one of six dining venues at the resort, and long lazy evenings can be spent watching the sunset and counting the stars at rooftop Fu Bar. 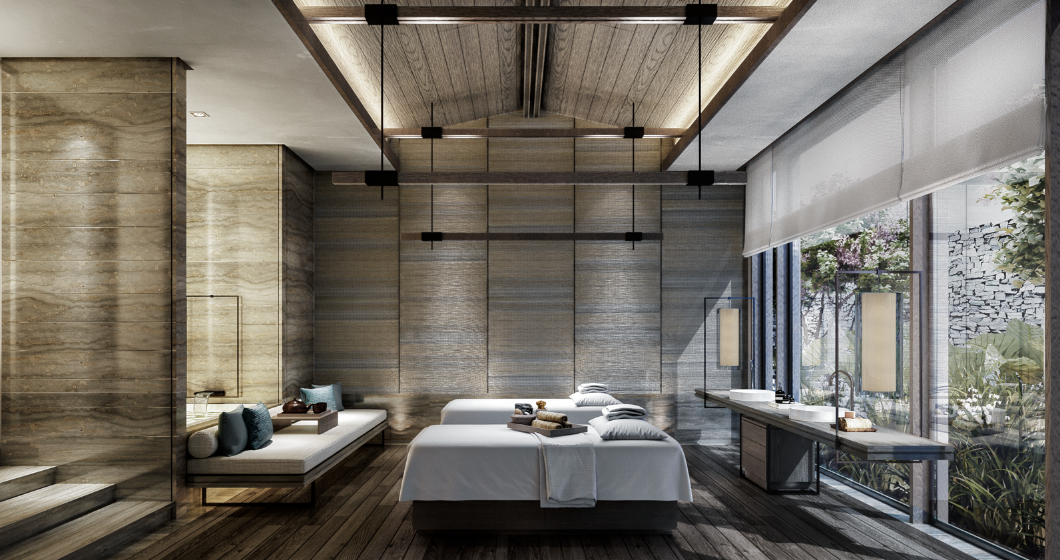