DESTINATION: Venturing into the unknown

French luxury cruise company PONANT and National Geographic Expeditions team up to make a visit to the most inaccessible islands of West Africa a special experience for lucky passengers. Whatever you do, don’t startle the hippos

Whether large or small, high or low, tropical or glacial, there is something about islands that makes them irresistibly alluring as travel destinations. Maybe it is the isolation – a word stemming from the same Latin root as island itself – that provides a temporal respite from continental concerns seeming to loom ever more daunting in recent times. Or perhaps it is the reassurance of water in every direction that appeals to the innate human need for two molecules of hydrogen and one of oxygen. Then again, it could just be colourful drinks with little umbrellas sipped on gorgeous beaches that have us captivated by fantasies of an island escape.

In recent years, mass tourism left very few places on the planet undiscovered, instead inundated by a growing number of curious travellers. There are, though, a few holdouts from the trend so devastatingly interrupted last year. If anything, the appeal of remote island outposts has increased that much more in the current travel climate.

Aside from the fact that the islands of Cabo Verde are astonishingly beautiful, collectively they make a perfect destination for those seeking emotional excitement without sharing the experience with thousands of strangers at the same time. PONANT is one of the very few cruise companies to call on ports in Cabo Verde; it is the only cruise company to bring visitors to the even less visited Bijagós islands in the Republic of Guinea-Bissau, where the unique culture and ecosystem present PONANT passengers with enjoyment and information in equal parts on National Geographic Expeditions cruises now offered in partnership with one of the world’s leading authorities on... Well, the world.

The Republic of Cabo Verde lies some 700 kilometres off the coast of West Africa, on the same latitude as Cap-Vert, the peninsula in Senegal which lent the islands its name – officially,  A República De Cabo Verde in Portuguese,  the country’s national language. Adding to the French and Portuguese names is the common name Cape Verde in English, now merely an informal term for this archipelago where a resurgence in national pride is seeing greater recognition of local heritage. Though the islands of Cabo Verde are extremely scenic, the transport infrastructure and scheduling of ferries between islands remain less than optimal, making movement within the country uncertain, time-consuming, and sometimes uncomfortable. On board a luxury cruise ship, however, the experience of getting around Cabo Verde is an altogether more agreeable one. Waking up each day along the resplendent shore of a different island is a pleasure not soon forgotten. 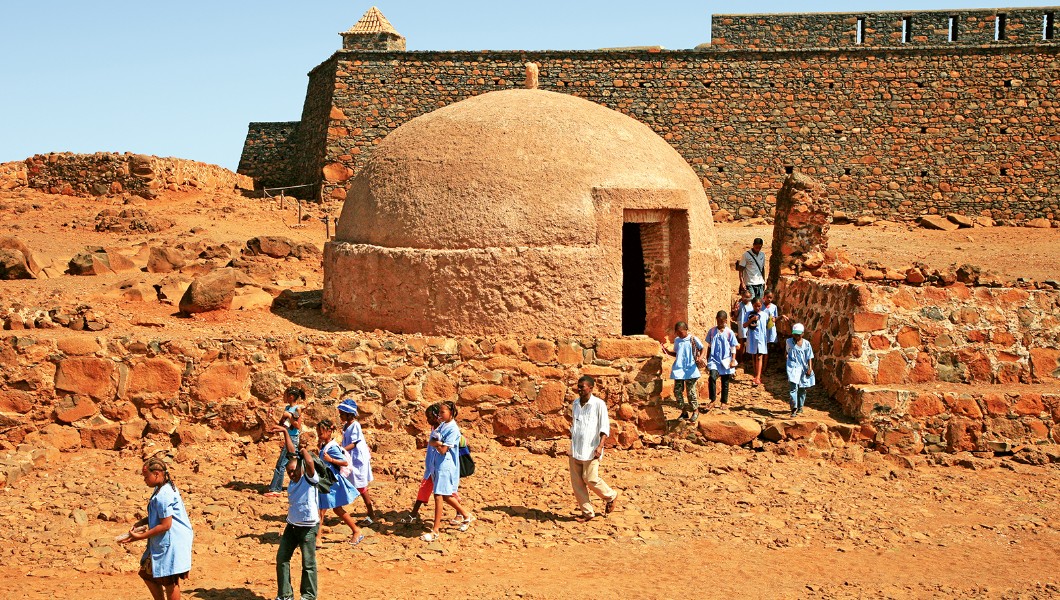 Praia, the capital of Cabo Verde, is located on the island of Santiago, the largest of the country’s 11 islands. Just a few kilometres away from this hardworking little city is Cidade Velha,  a UNESCO World Heritage Site recognised for its importance as the oldest settlement on the islands, which where uninhabited at the time in 1462 CE (866 AH) when the Portuguese established the settlement then known as Ribeira Grande. Today, the site is simple, picturesque, and evocative –  an apt metaphor for Cabo Verde in general.

More famous than Santiago is the fabled island of São Vicente, home to Cabo Verde’s captivating morna style of music made famous throughout the world by the late Cabo Verdean singer Cesária Évora.  São Vicente and its principal town, Mindelo, retain their position as the cultural capital of the nation. 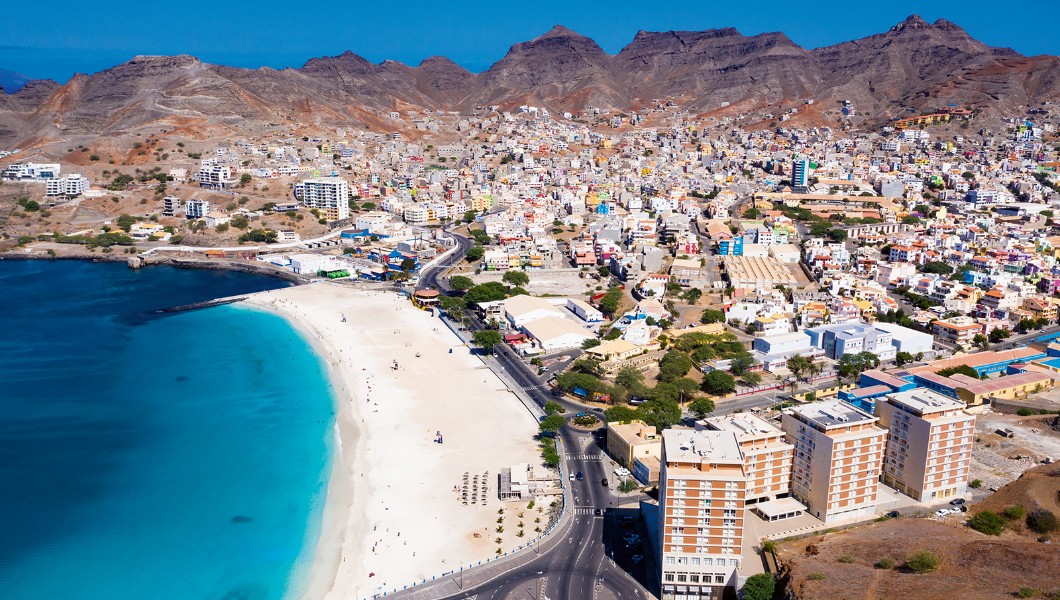 It seems in Cabo Verde that the smaller the island, the more arresting the scenery. Attractive as Santiago and São Vicente may be, the landscapes of Santo Antão are truly spectacular. Much greener than neighbouring São Vicente thanks to soaring mountains that trap clouds and moisture, Santo Antão’s jagged peaks, deep valleys, and verdant foliage combine to create one impressive panorama after another. 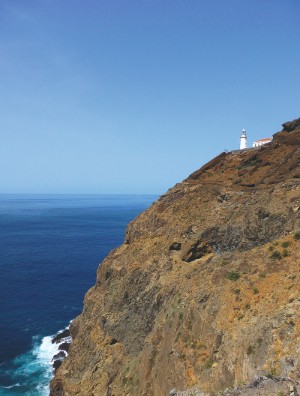 The ride to the Borda de Cova lookout point sets the tone for a day of dramatic vistas; once at the edge of this volcanic caldera, travellers have the rare opportunity to look into  a volcano from above. Long dormant, the caldera is now considered prime agricultural land and is used for (very green) crop cultivation. No less inviting is Santo Antão’s coastline; as can attest anyone meandering along the edge of towering cliffs dropping sharply into the Atlantic or watching the fishing boats in the charming little harbour in Ponta do Sol, the bracing sea air is refreshingly invigorating. Between the mountains and the sea, on the edge of the Paul Valley, is Beth D’Kinha, a small distillery where Cabo Verde’s traditional grogue is produced to perfection in a variety  of flavours. 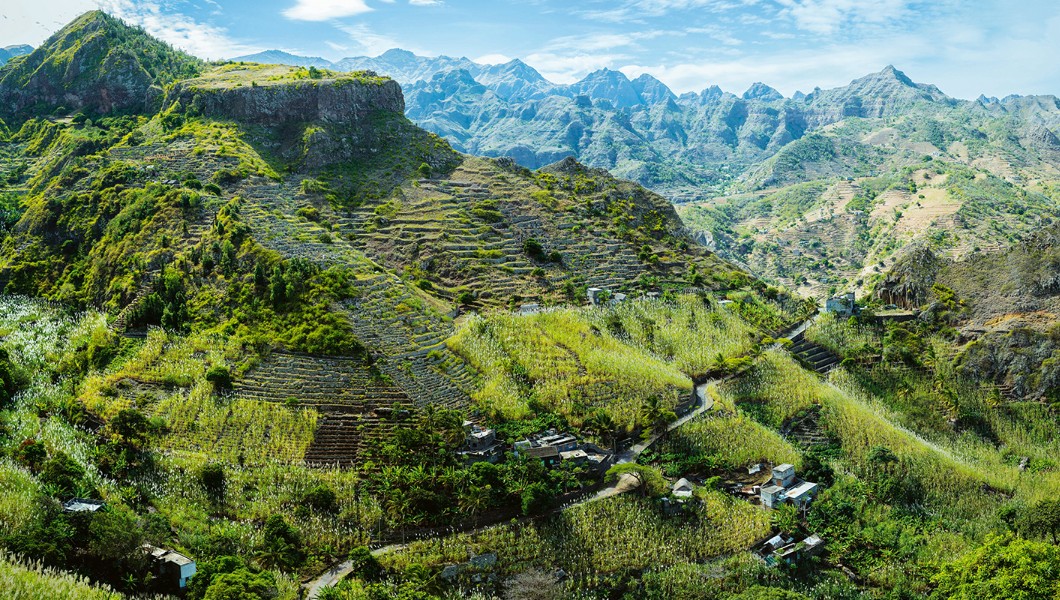 The place to see a volcano from below is the island of Fogo, which means fire in Portuguese. The name alone indicates the prominence of the massive Pico do Fogo volcano that defines the island both literally and figuratively. The graceful architectural lines and bright tropical colours of the Portuguese colonial-era buildings found in the island’s tiny town of São Felipe belies the striking contrast awaiting visitors to Fogo Nature Park, a stark landscape of volcanic rock and little else besides the roofs of houses engulfed by molten lava released during the 1995 and 2014 eruptions of this still-active volcano. Rising more than 2,800 metres, Pico de Fogo is the highest point in Cabo Verde. 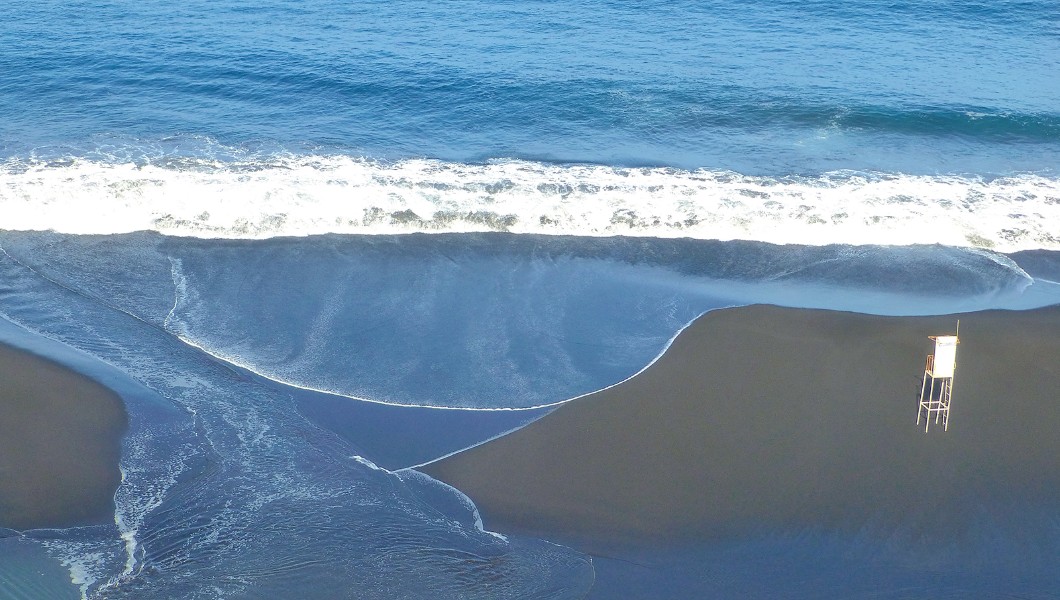 High is a relative term. In the Bijagós archipelago, 28 metres is considered high ground in these low-lying islands off the coast of the Republic of Guinea-Bissau. One of the least-visited countries in the world, Guinea-Bissau is another Portuguese-speaking nation, this one to the south of Senegal instead of to the west. In a place where foreign visitors are counted in hundreds instead of millions, local cultures remain unaffected by outside influences. 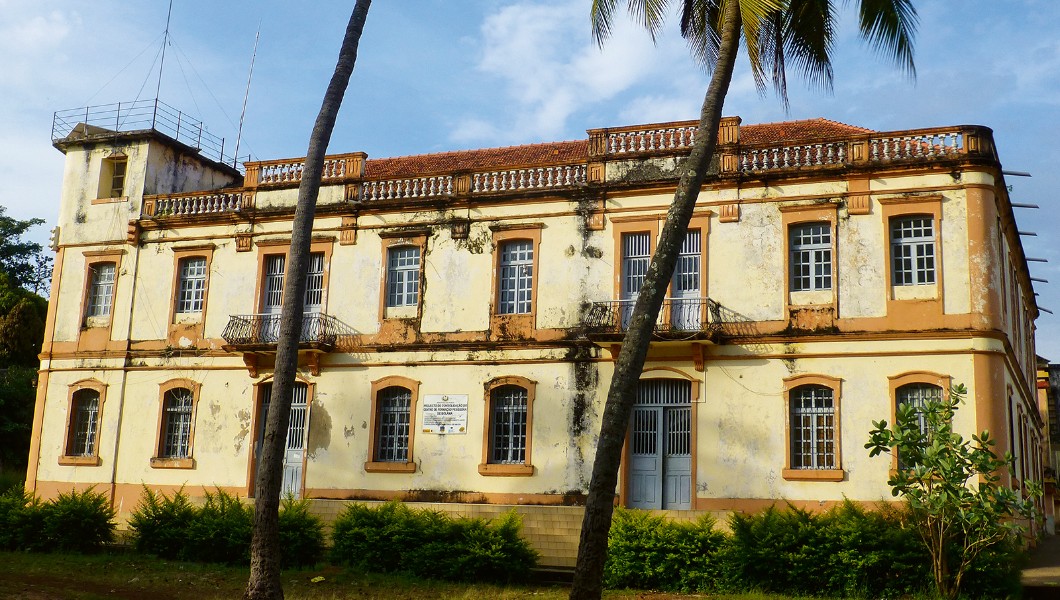 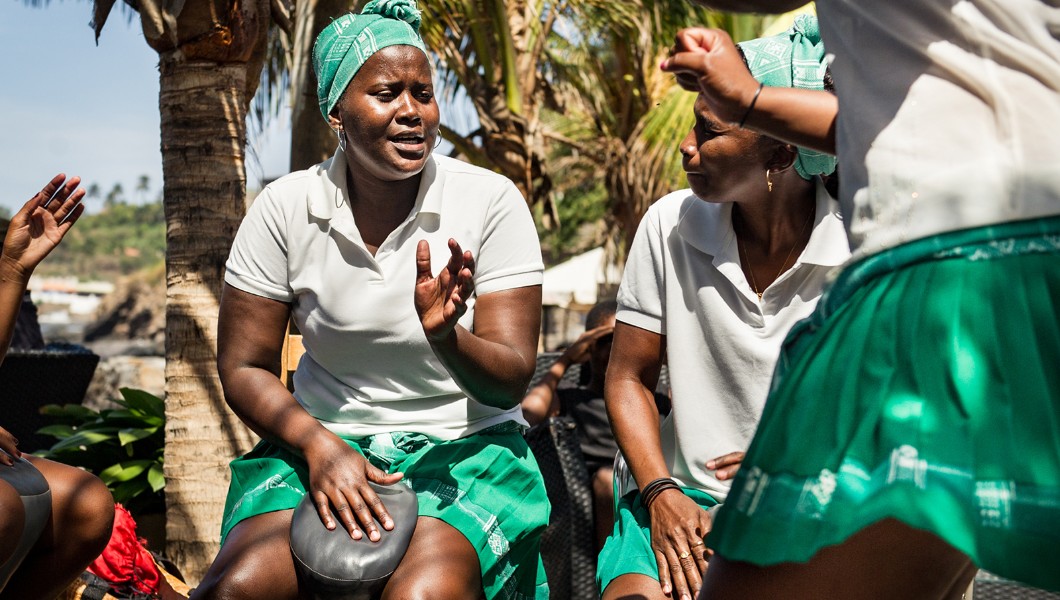 Thanks to PONANT’s and National Geographic Expeditions’ unique agreement with the government of Guinea-Bissau, passengers are able to witness cultural events such as dance celebrations on the island of Bolama, as well as natural attractions epitomised by  a hippopotamus colony that inhabits a freshwater pond on the island of Orango by day but ventures into the saltwater of the ocean by night.  For sophisticated travellers, the ability to visit  a place certainly absent from the itineraries of others is as exhilarating as it is rewarding. 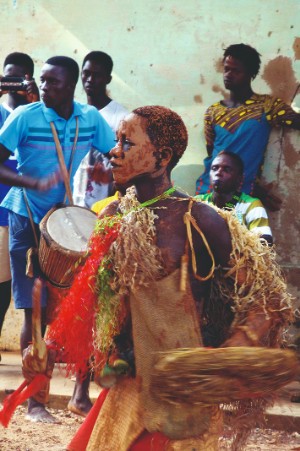 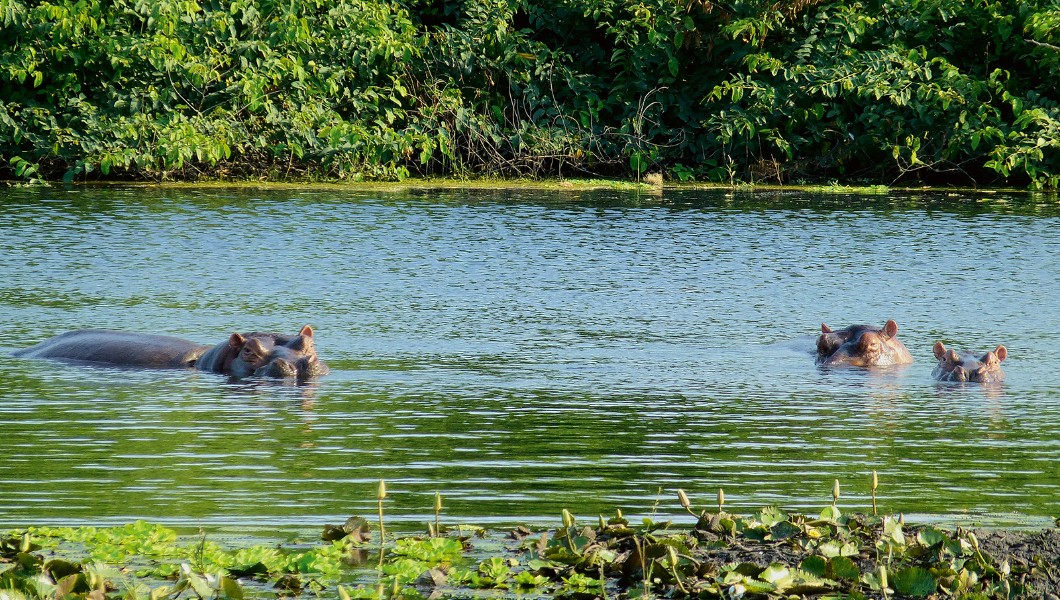 As are the others in PONANTs Explorer series of ships, the Dumont-d’Urville is named for a French seafarer. Eighteenth-century adventurer Jules Dumont d’Urville was completely enthralled by the lure of global exploration, a character trait shared with almost all the passengers aboard his namesake vessel, one of the newest in the PONANT fleet. There is something pleasantly intoxicating about the smell of a new car's interior; that same sensation also takes place on board a brand-new ship, though very few people are fortunate enough to experience it. 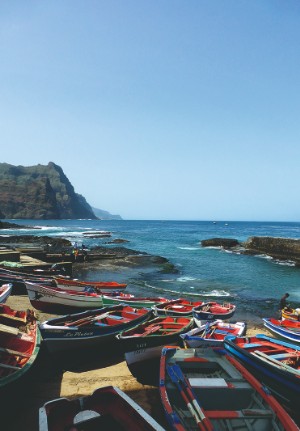 Designed more as a hotel that happens to sail rather than a ship that happens to host, the plush accommodation on the Dumont-d’Urville ranges from stylish cabins to expansive suites with private decks to take in the passing scenery and sea air in total privacy. Regardless of category, every interior is elegant in decor and immaculate in presentation. The Dumont-d’Urville carries a maximum of 184 passengers; they enjoy the indoor and outdoor dining areas, bar, spa, pool, and entertainment events in a civilised manner, without the thousands of other passengers typically occupying larger cruise ships.

The Explorer ships lend themselves well to PONANT’s collaboration with National Geographic Expeditions, an exciting development in the world of cruising. The marriage of PONANT with National Geographic Expeditions combines the level of luxury expected by discerning travellers with engaging voyages to some of the world’s most isolated, least visited locations in the company of erudite guides who are leaders in their fields. From astronomers and botanists to yachtsmen and zoologists, PONANT and National Geographic have their destinations covered air, mer, and terre. In little-known places such as Cabo Verde and Guinea-Bissau, their invaluable expertise enhances the cruise experience to an admirably high level. The staff on board are sometimes complemented by local specialists who join the cruise at different ports to provide additional knowledge and insight to deepen the travel experience that much more. National Geographic›s partnership with PONANT represents the apogee of informative adventure cruising coupled with luxurious accommodation and personalised service. 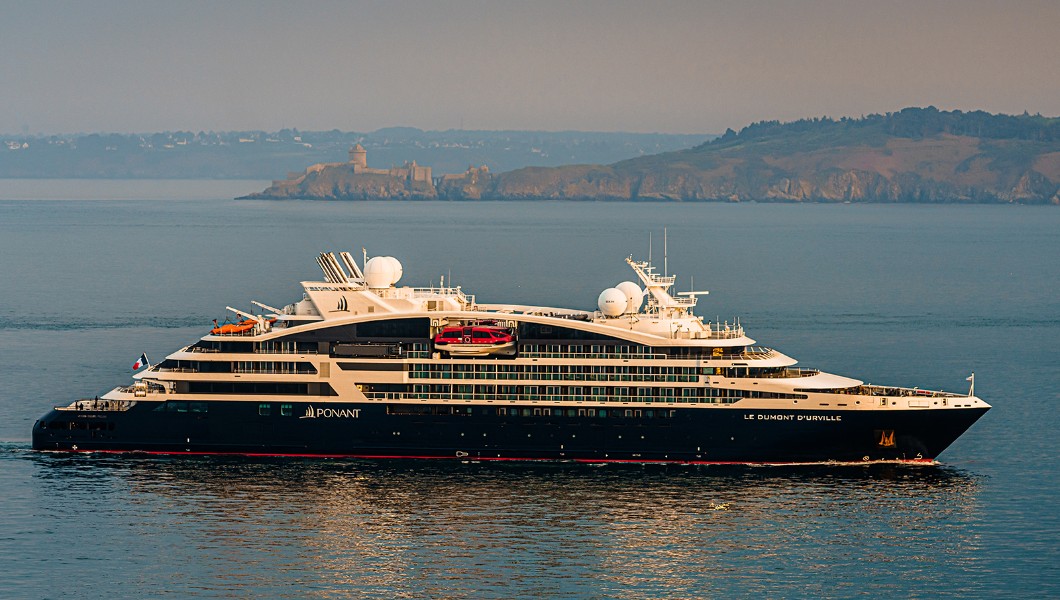 National Geographic has long been recognised around the world for its investigation of nature and cultures. The company’s recent acquisition by The Walt Disney Company is seeing a not unexpected expansion of activity under the National Geographic brand to capitalise on its goodwill and reputation for high-quality exploration of our world. The famous magazine framed in yellow has generated a multitude of experiences for adventurous people, including several for affluent travellers looking for remarkable experiences without sacrificing comfort or convenience. Among fellow passengers on board PONANT ships may be former ambassadors, famous athletes, influential industrialists, and discreet heirs to family fortunes. At this level of exclusivity, no one has anything to prove and passengers maintain  a relaxed, convivial mood – easy to do on  a PONANT ship where everything is run with meticulous precision and exceptional attention to detail. For those who seek the ultimate in personalised cruising, PONANT’s ships can be chartered for private voyages for intimate family gatherings or groups of friends celebrating  a special occasion. Whatever the reason, a private expedition will provide an extraordinary cruise experience for even the most sophisticated of travellers accustomed to nothing less than the best. 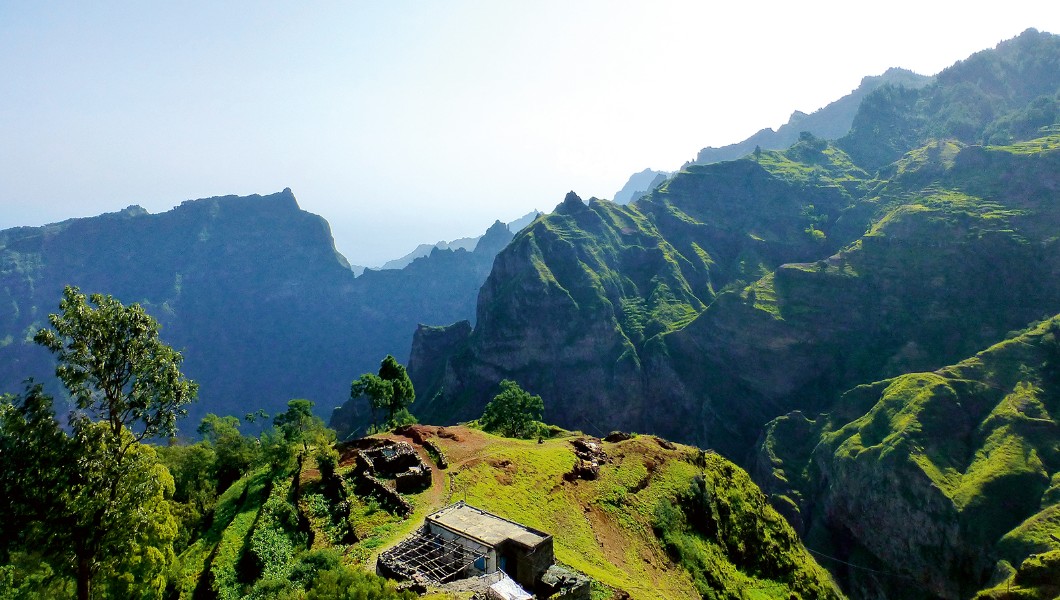 Most of PONANT’s West African cruises begin or end in Dakar, the seductive capital of Senegal where more adventures await those who seek cultural stimulation, beachside relaxation, and/or vibrant nightlife as a start or finish to a trip to a part of the world comparatively unexplored by global wanderers. 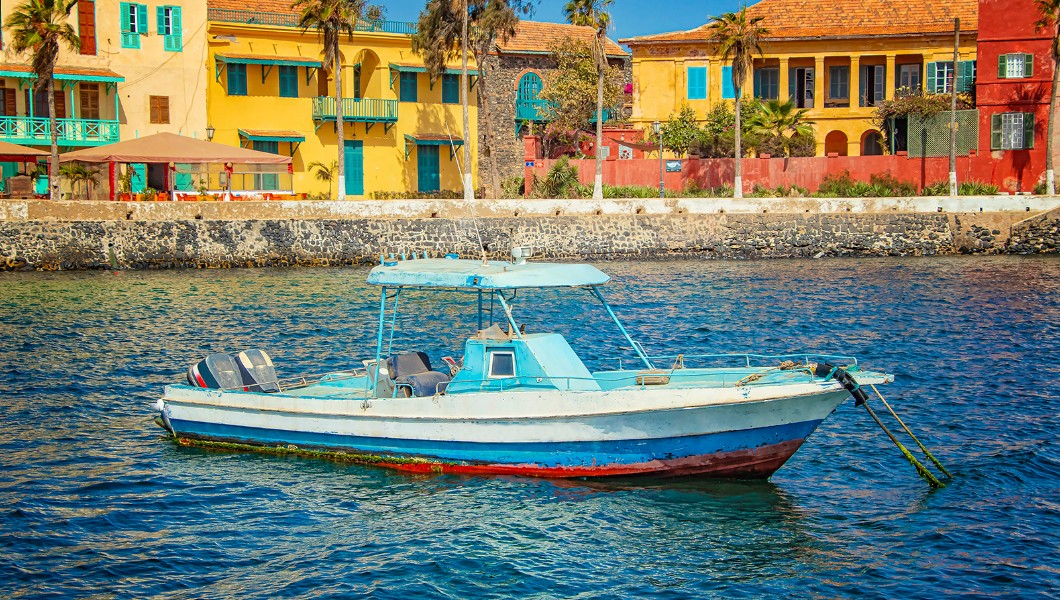 The Senegalese tradition  of teranga goes beyond the simplified translation  of ‘hospitality’ to embrace a far more comprehensive regard for visitors to the country, many of whom come specifically to visit historic Gorée Island, Dakar’s principal tourist attraction and another UNESCO World Heritage Site. No matter what the exact itinerary, a National Geographic Expeditions cruise aboard PONANT is a superb option for visiting the remote yet fascinating islands of West Africa in high style. 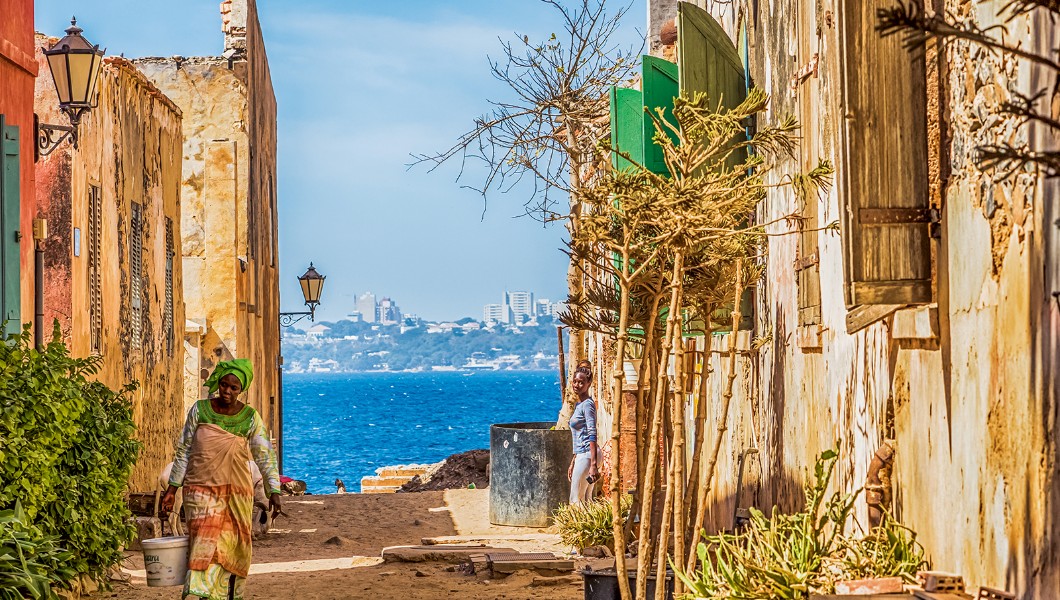