Away from the hedonism of Ayia Napa is a cosy, coastal resort that’s rooted in Cypriot tradition yet with a thoroughly modern mindset. Quaint, understated and the antithesis of cool

Mention the word Cyprus, and I’ve always pictured hedonistic holidays, a too-cool-for-school clubbing crowd and far too late nights out in Ayia Napa, the raucous town on the island’s south-east coast. All good reasons, I believed, as to why I’ve never been a Cyprus kinda girl. 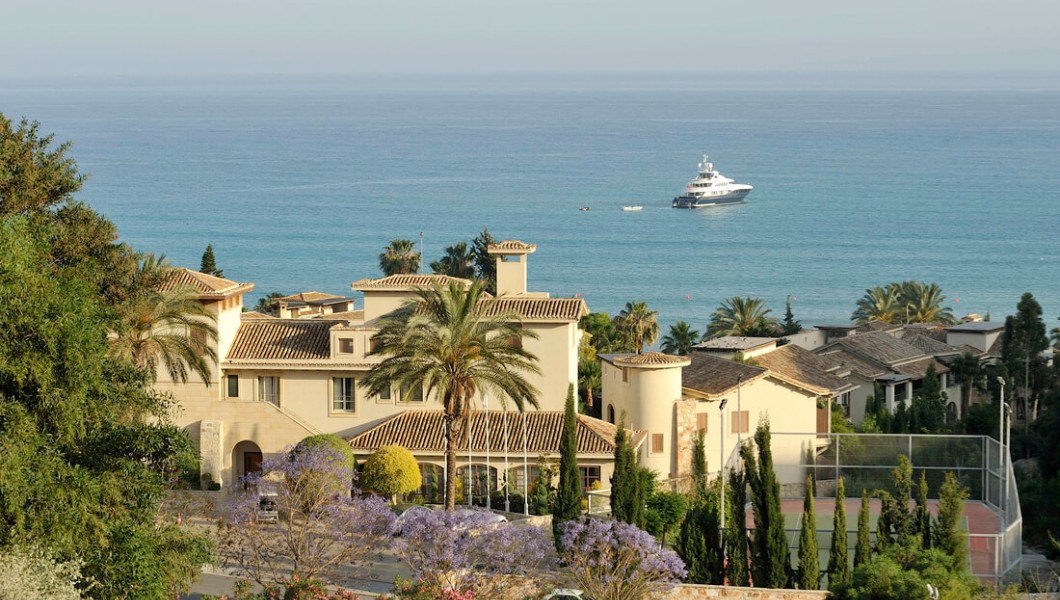 But, being a little older and wiser now, with less sweeping assumptions and more and more friends dangling a metaphorical Cypriot carrot, I decided it was time to put Cyprus to the test, and scratch beneath the surface to see what the ‘other side of the island’ had to offer beyond infamous Ayia Napa.

Which is how I find myself at Columbia Beach Resort, a meandering, Mediterranean red-roofed resort with village-feels that overlooks Pissouri Bay on Cyprus’ south-west coast. If Ayia Napa wears the cool crown, Pissouri wins the beauty pageant prize. All rustic and natural, Columbia Beach Resort’s coastline is flanked by white cliffs and rugged mountains on one side, with a two-kilometre stretch of pebbled beach on the other. 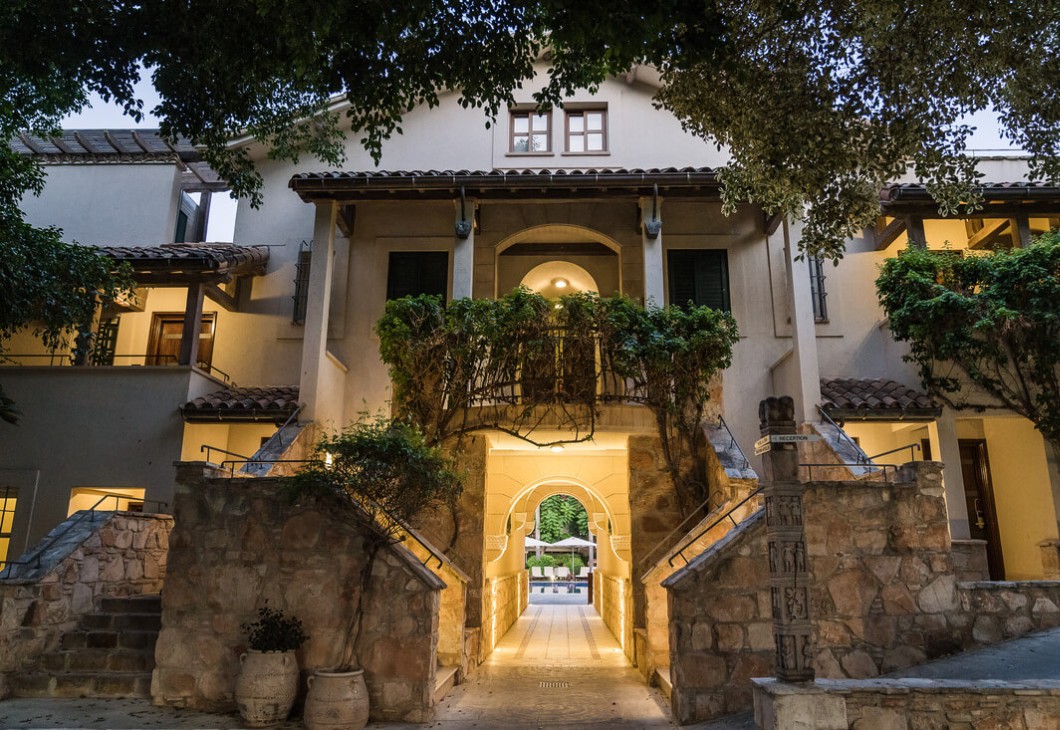 Design-wise, Cypriot architecture meets a Mediterranean mindset: cobbled pathways, Cyprus trees, courtyards and hidden corners. It feels incredibly intimate, as if you’ve stumbled across one of the world’s best-kept secrets, when in reality the resort sprawls over 75,000 square metres, with 169 suites in two wings, two swimming pools, three restaurants, a kids club and an award-winning spa. Oh, and an on-site teeny, tiny chapel, too. 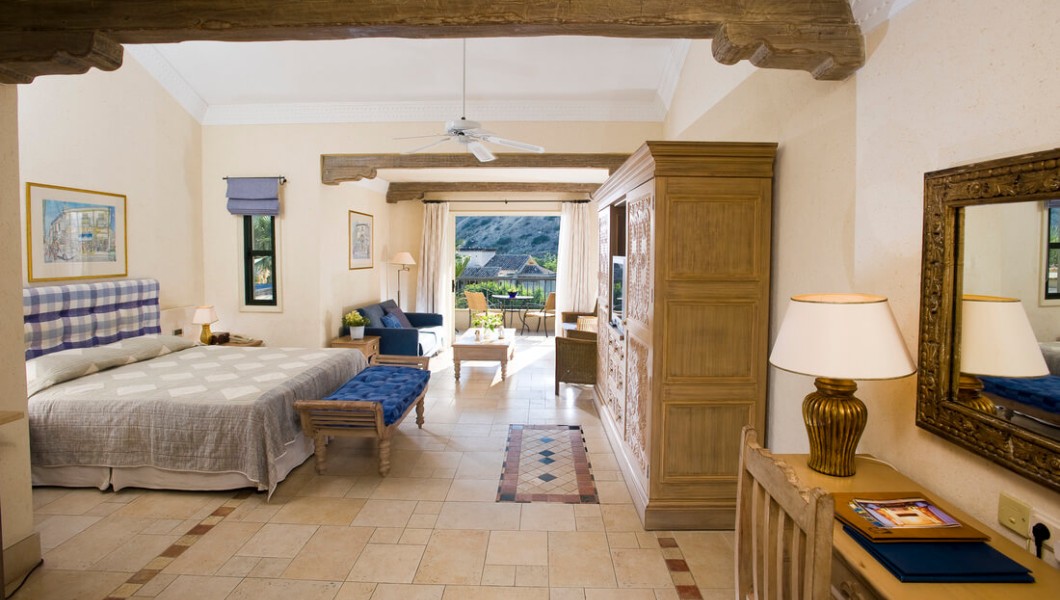 My home for four days is an Executive Suite in the West Wing with views stretching far beyond the lagoon pool below, over the top of palm trees to the pebbles of Pissouri Bay. A gin and tonic on the balcony at day’s end paints a perfect picture, as string upon string of fairylights do their thing, and boats disappear in the dark. 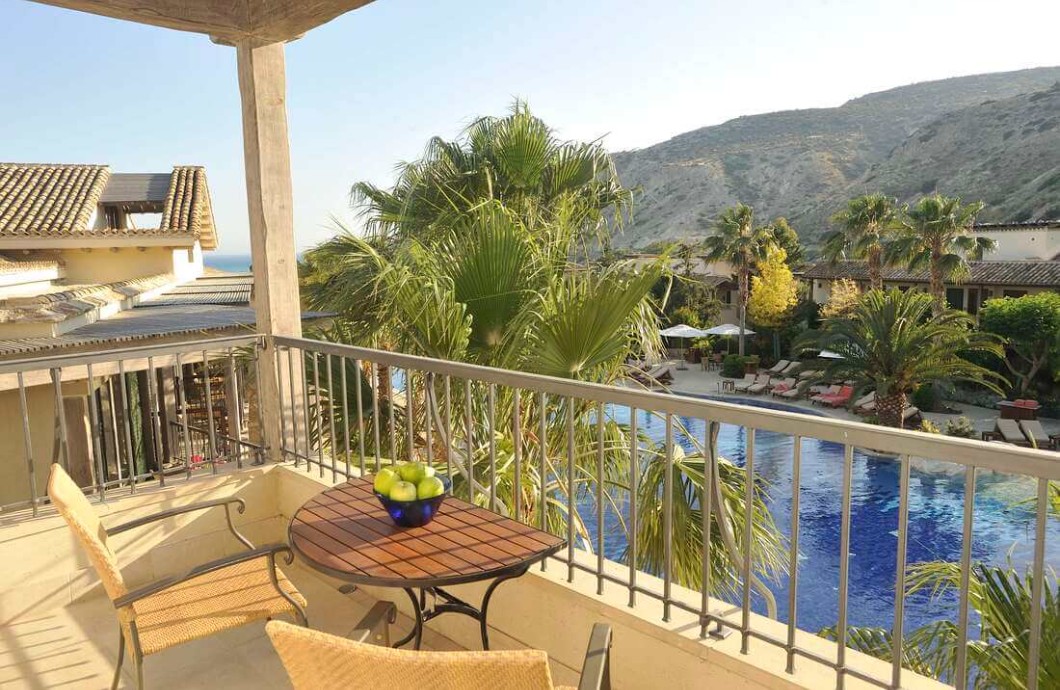 Inside, it’s rustic, relaxed chic all over again – paved flooring, ornate wood furnishings, a huge open living space all flooded with light. There’s absolutely nothing pretentious here, just gentle luxury, and a homely style all of its own. 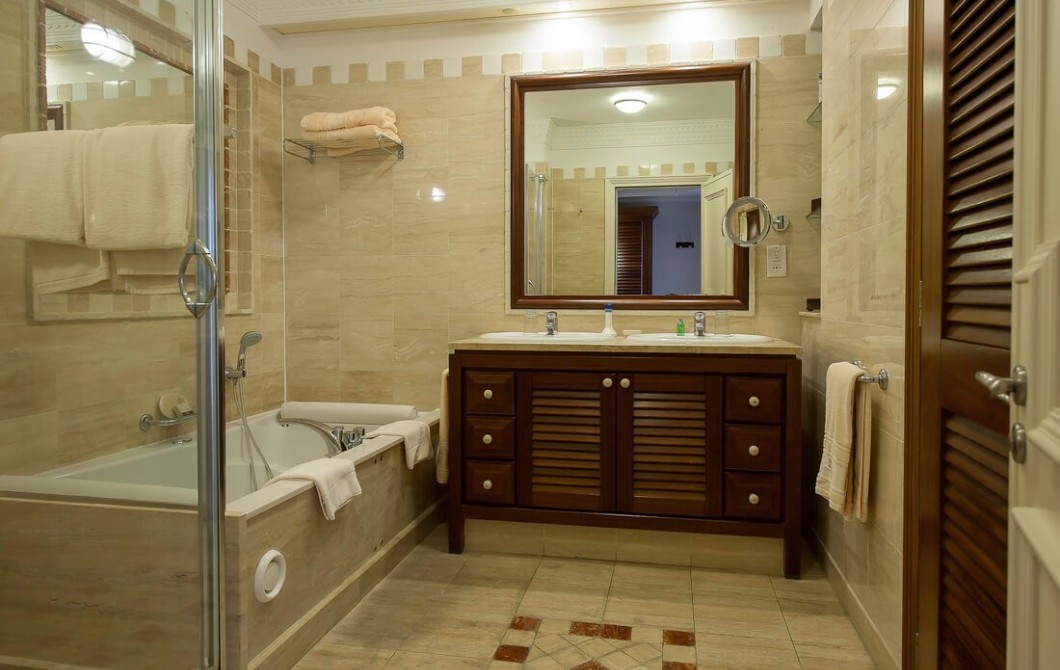 The beach is perfect for early morning or sun set meanderings, especially for shell or stone-seekers. We fill our bags with beautiful bright white pebbles to paint and bring home as mementos, skimming the flatter ones across the bay’s calm waters. The beach is almost all ours, just a few families dotted around under straw umbrellas. 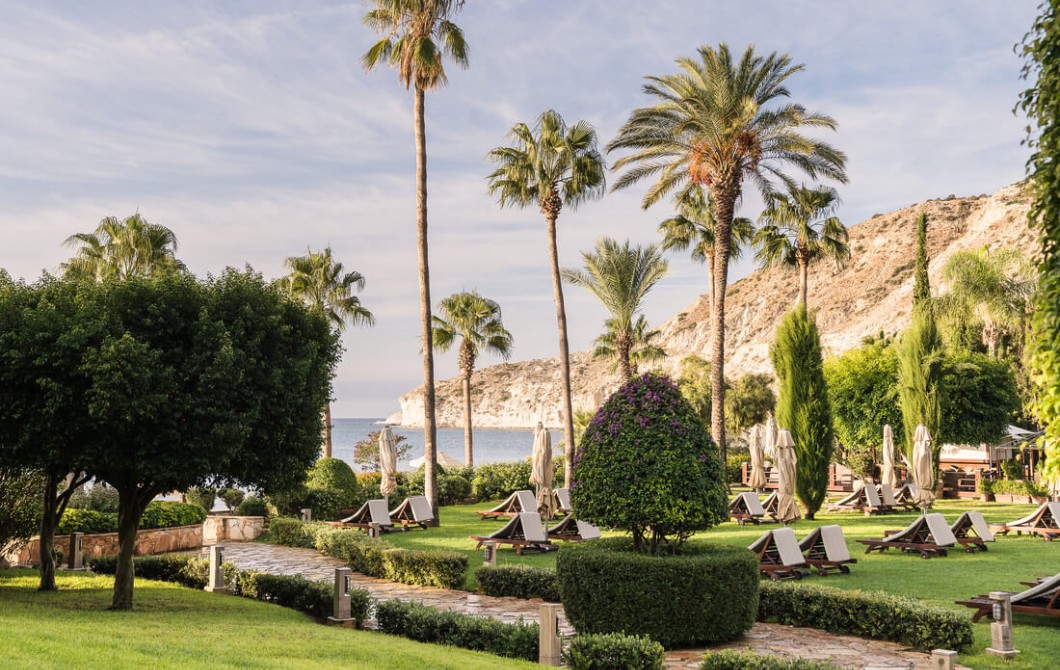 Beyond the beach, and as the days go by, I can be found at the lagoon pool or at the swim-up bar, which is why The Den Kids’ Club is my saviour – a colourful, activity hot-spot where the adult-to-kid ratio is the stuff of parental dreams, and eternally upbeat staff entertain my daughter long past her allocated time-slot. It’s the perfect combo: she’s occupied and I’m alone, at last. 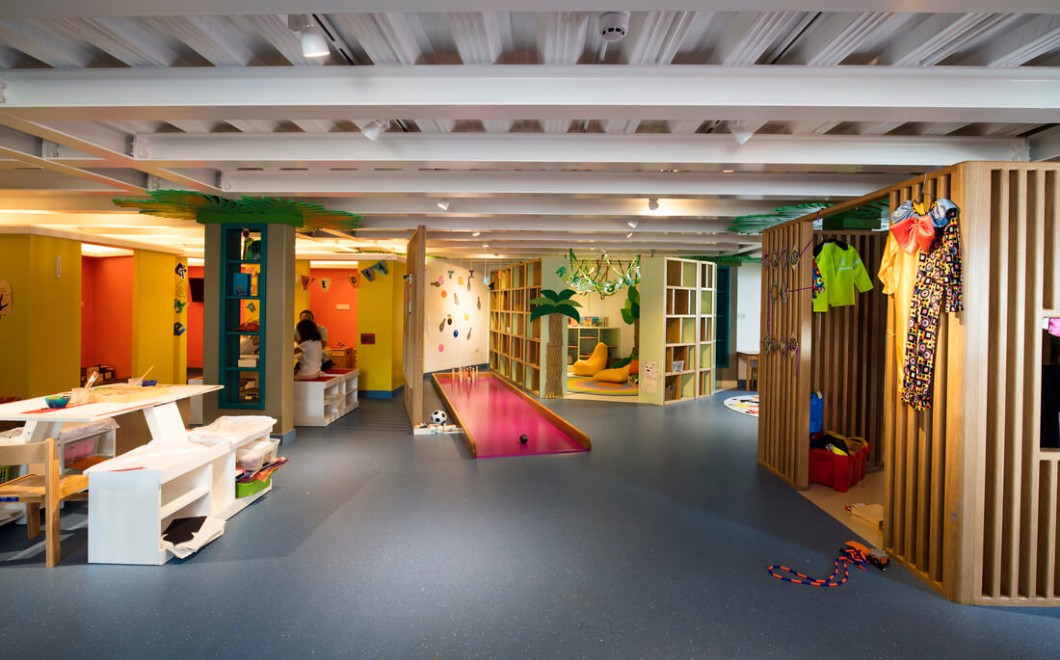 We reunite over lunch at Cape Aspro, its terrace ideally situated for a cooling off-shore breeze, with just-caught seafood thrown on the barbecue as fresh as it gets. At night, we dress up and wander over to Apollo Tavern, surrounded by olive trees, for a late al fresco supper of mezze and moussaka, and old Cypriot melodies sung by two ebullient old gentlemen, Loris and Panikos. 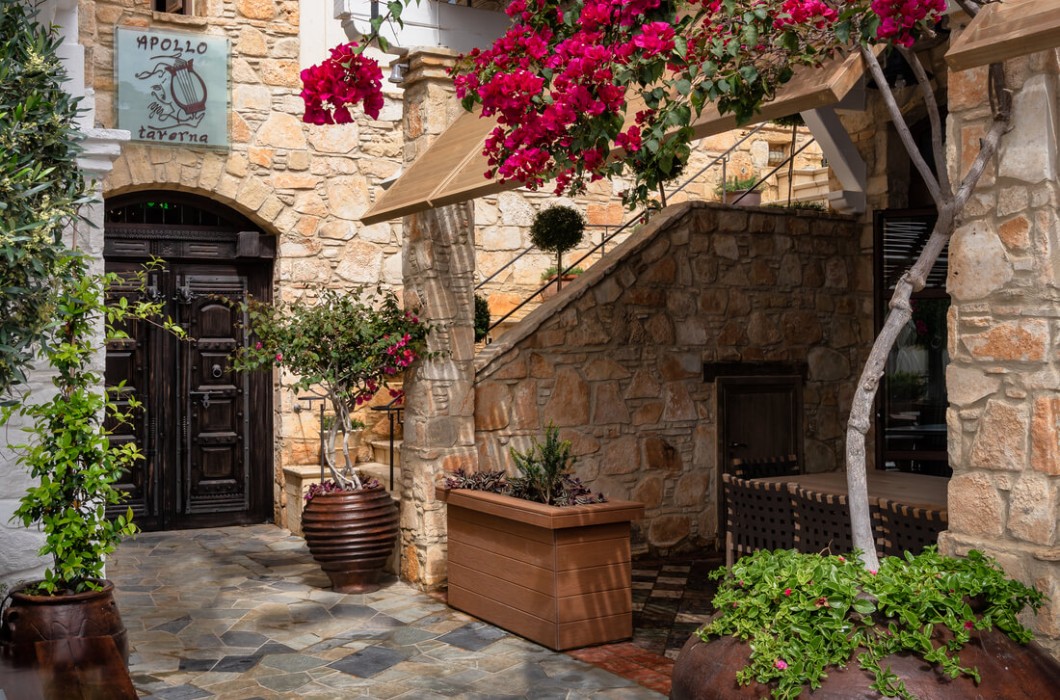 There’s little reason to leave the resort, but one night we wind our way up to Pissouri Square to immerse ourselves amongst the throngs of locals and retired expats that congregate outside tavernas, eating olives and souvlaki, sipping Cypriot wine, and swapping stories that spill long and late into the night. The Bunch of Grapes Inn has a beautiful, hidden courtyard for more grown-up dinners, but it’s more fun to throw yourself into the thick of things at O’Vrakas Taverna, right in the heart of the square, and feast on fried calamari, Greek salad and spinach pie while you people-watch. 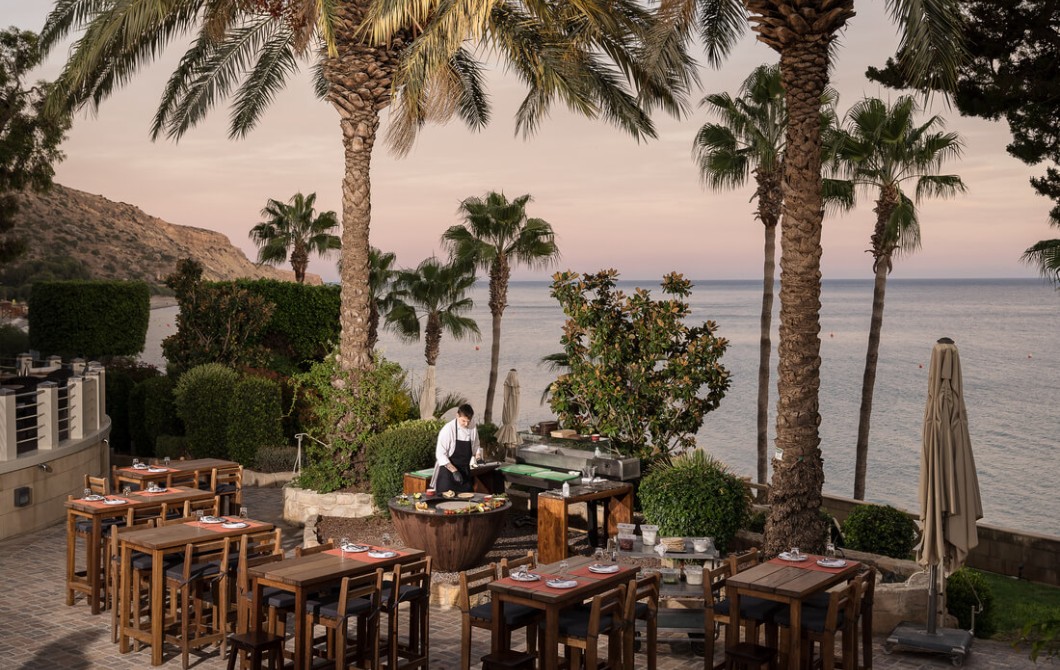 A great deal of the appeal of Columbia Beach Resort is the way that it blurs the lines between old-world charm and modern thinking. Whilst it is undeniably a huge complex plot-wise, the hotel understands the power of privacy and escapism, which is where all the hidden corners and cobbled passageways come into their own. It’s easy to stroll around and barely bump into another soul should you not want to.

Another part of its charm is the village vibes, made all the more apparent when you come across one of the hotel’s resident cats. Thanks to its Columbia Cat Care Project, which launched in 2009, the hotel looks after the welfare of several colonies, giving them food, shelter and a better life. Unobtrusive for those not feline-inclined, but a kind and sentimental addition to those that are, and a further testament to the heart and soul of the people that work at the hotel. 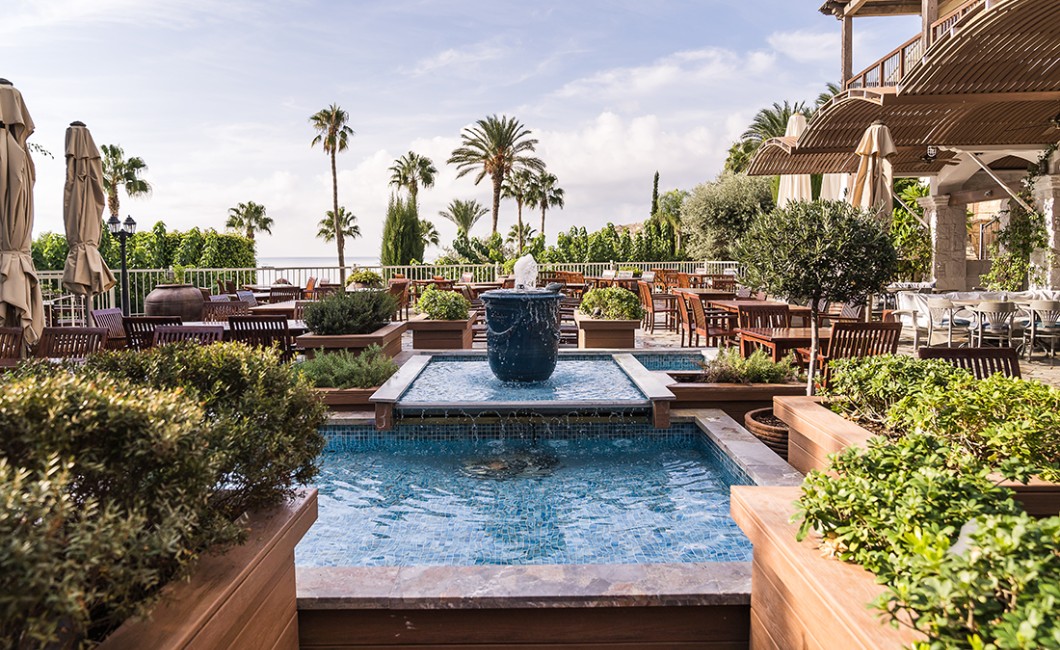 It’s rare that I find myself actively inclined to return to a place I’ve already stayed, but something about Columbia Beach Resort has really stolen my heart. A combination of village charm, cats and a flawless kids club, perhaps... Well, that and much, much more. 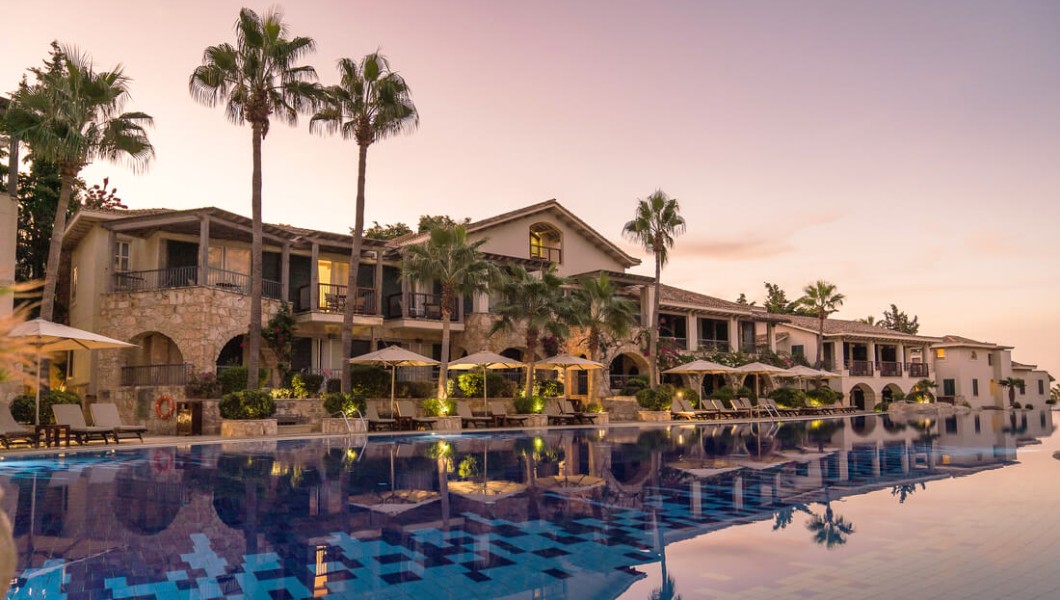 And so, when I meet a couple round the pool one day who tell me they’ve been staying at the hotel since it first opened in 2002, I can see myself in them. They say that home is where the heart is, and when you find the right one, you’ll never want to leave. With that in mind, I guess I’ll be seeing you soon, Columbia Beach Resort…