When the plane comes in to land at Los Angeles International Airport, nine world-famous white letters on the mountainside zoom into view. Welcome to Hollywood

You’re almost guaranteed good weather landing in Los Angeles: the yearly average temperature is 18.2 degrees. It sets the scene when you’re driving from the airport down palm tree-lined freeways with giant movie posters beside them. The driver casually tells me that the road we are on is where the 1994 hit Speed was filmed. It’s hard to avoid this kind of name-dropping in La La Land.

My destination looks more like an historic ocean liner than a hotel. The marble floor, mahogany check-in desks and circular chandelier give it an Art Deco air. When I get to the elevators it finally sinks in that it’s actually a movie set. I’m in the heart of Beverly Hills at the Beverly Wilshire (+1 310 275 5200), which shot to fame in the 1990 blockbuster Pretty Woman starring Julia Roberts and Richard Gere. Although the hotel has undergone a major renovation since then, these iconic elevators, where some of the movie’s most memorable scenes were set, have hardly changed. Eagles and Greek gods are carved into the brass doors and inside there’s a traditional red leather seat against wood-panelled walls. 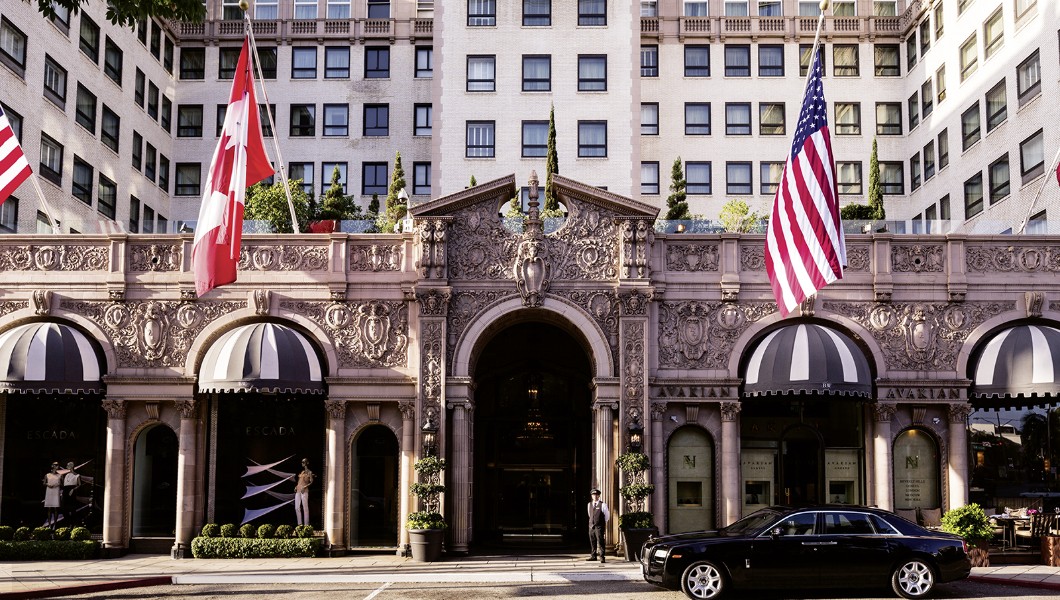 Like the lobby, my room is a fusion of contemporary and classic; a reminder that the hotel opened during Hollywood’s heyday in 1928. The stylish furniture, slimline TVs and bedside USB charging points contrast with the old-fashioned oil lamps on the walls and shutters on the inside of the bathroom windows. The Beverly Wilshire has one of the most well-connected concierges in Hollywood, so it’s worth making the most of it. I call to make a 2.30pm booking at the Sony Pictures Studio tour (+1 310 244 8687) and an 8pm reservation at the hotel’s restaurant CUT (+1 310 276 8500; www.wolfgangpuck.com), the only Michelin-starred steakhouse in the Americas.

A hotel car is on hand to whisk me to Hollywood Boulevard, which is only a 40-minute drive from Beverly Hills. Even the street names are steeped in history. Just south of Hollywood is Sunset Boulevard, title of the 1950 film noir, and running parallel to that is Melrose Avenue, which inspired the 1990s soap opera Melrose Place. My first stop is the Hollywood & Highland shopping complex, which opened in 2001 and includes the Dolby Theatre, home of the Oscars. Towering over it are stone elephants standing next to a huge arch inspired by the 1916 epic Intolerance, which featured horse-drawn chariots racing along battlements in ancient Babylon. Three viewing platforms span the centre of the arch directly opposite the Hollywood sign, allowing you to get crystal clear photos.

Lunch is spent in the company of music memorabilia at the Hard Rock Café on Hollywood Boulevard (+1 323 464 7625). The buildings lining the road are more like a patchwork quilt than the homogeny usually found on an American high street. Old banks sit next to tattoo parlours followed by ornate Art Deco cinemas and souvenir shops. Panels along the boulevard give insights into the most historic of the landmarks. There’s the Hillview Apartments, an art deco residential block with colourful canopies above each room window; built in 1917 by Paramount Pictures founder Jesse Lasky to give actors somewhere to live as they were considered unreliable tenants. Further down the boulevard you can find Hollywood’s first nightclub, which opened in 1922 and was a haunt of Bing Crosby and Charlie Chaplin.

If you want to pretend you’re strolling down the red carpet, head to the TCL Chinese Theatre (+1 323 461 3331), which has staged premieres of blockbusters from Mary Poppins to Star Wars. The front of the Chinese Theater resembles a large pagoda with terracotta warrior statues guarding the doorway. However, inside it has the appearance of an old-fashioned cinema, thanks to deep red carpets, a gilded arch around the screen and dark wooden beams lining the walls and ceiling. The plaza in front of the building is dotted with hand prints of Hollywood’s most famous names; a fun alternative to the often-crowded stars along the Walk of Fame next door.

The only way to get even closer to the action is by going behind the scenes. I hail an Uber to drive half an hour to Sony Pictures for a guided tour of their studios which have been home to everything from The Wizard of Oz to modern blockbusters like Spider-Man, as well as TV shows including Wheel of Fortune and Jeopardy. The tour begins in a hall packed with familiar props; fans of the ‘80s can shake hands with Johnny 5, the iconic robot from Short Circuit. A carbon fibre head from 1998’s Godzilla hangs on the wall, while the high-tech bike from Men In Black 3 is a centrepiece. As the tour continues through soundstages and studios, your guide will tell you the real tricks of the trade. Ever wondered why game show contestants all look the same height? That’s thanks to hidden platforms that rise from below. How about films with a lot  of driving in reverse? There’s a second steering column used by a driver in the passenger seat who faces backwards.

I head back to Beverly Hills for a spot of window-shopping. The hotel sits on Wilshire Boulevard and just opposite is the charming Via Rodeo, which looks more like a lane in London thanks to its cobbles and ornate iron lampposts. It is lined with high-end chains like Jimmy Choo and Stefano Ricci, while Chanel, Gucci and Prada are just a few of the names further up on Rodeo Drive itself. You’ll need a spare phone battery by now as there are even more selfie opportunities on the Rodeo Drive Walk of Style, a row of plaques commemorating fashion icons from Gianni Versace to Tom Ford. Beyond Rodeo Drive is yet another photo opp: the famous Beverly Hills shield, which featured in ‘80s action movie Beverly Hills Cop.

After hot footing it around, you’ll be ready for a soak in the Beverly Wilshire’s pool. With arches and palm trees around it, the pool looks like it has come from a Mediterranean mansion, which is no coincidence as it is modelled on Italian style icon Sophia Loren’s villa. Nothing has been overlooked. Spray-on sunscreen and fruit juice are complimentary and you can even splash out on a haircut fit for the Oscars, as the hotel’s spa is home to Lea Journo Salon, whose clients include Natalie Portman and Orlando Bloom (+1 1 310 385 7007).

Time for that all-important dinner reservation at CUT. With its curved white walls and sweeping beams, the restaurant looks like it belongs in a space ship. It’s a collaboration between Getty Center architect Richard Meier and Austrian celebrity chef Wolfgang Puck, who personally greets guests at their tables when he is in town. Steak is the order of the day here and you can’t go wrong with either the Wagyu or dry-aged Nebraska.

There’s still time for some people watching before the curtain comes down on the day. Sitting at an outside table in THE Blvd bar (+1 310 385 3901) I sip a nightcap and admire the supercars racing down Wilshire Boulevard. Even as I retire to my room, I’m still immersed in Hollywood history. This is the hotel where fans floated love letters on balloons up to Elvis Presley’s room when was a resident. Action star Steve McQueen also stayed here and privatised a floor of the car park for his exotic auto collection. My guest appearance can’t compete with that, but after a day in tinsel town I don’t just feel like a star, I’m ready to write my own Oscars speech.