What makes Vienna such a romantic destination all year round?

It’s a fact that even Freud wouldn’t have questioned – few European cities are more magical in wintertime than Vienna. Its Baroque architecture looks grander, its gothic spires, more romantic, and its ornamental parks transform into snowy wonderlands. Oh, and the glühwein is in full flow! With temperatures often plummeting to freezing, making great escapes from the cold can unearth some culinary and cultural gems. The city that gave the world Mozart, Klimt and Freud has also mastered the art of gemütlichkeit, a feeling of cosiness and comfort. That could be huddling into Vienna’s legendary wood-panelled coffeehouses, indulging in winter comfort food like kaiserschmarrn (a sort of scrambled pancake), or bundling up for a romantic carriage ride along the city’s frostbitten cobblestone avenues.

Cosseted in woollen blankets, honey buttered rum in hand, I too am learning how to gemütlichkeit the Ritz-Carlton way, on the hotel’s eighth floor rooftop terrace bar, which affords knockout views of the city. Located on Vienna’s timeless Ringstrasse Boulevard, the 202-guest room and 43-suite Ritz-Carlton is a masterfully fused quartet of 19th century palaces, its ornate fireplaces, frescoed ceilings and intricate woodwork the epitome of old-school imperial glamour.

Aside from its heritage clout and outrageously proportioned rooms, what sets the Ritz-Carlton apart from its peers is its seventh floor luxury Club Lounge, the only one of its kind in the capital. The caveat? You’ll need a reservation at one of its seventh floor suites. Just hours earlier I had been whisked up to this sumptuous space, plied with hors d’oeuvres, free-flowing champers (a daily affair) and hot chocolate courtesy of its resident chocolate sommelier. Somewhere between the apple-strudel ceremony and mastering the art of making not one, but three unpronounceable Viennese coffees, I had been checked in to my club suite. 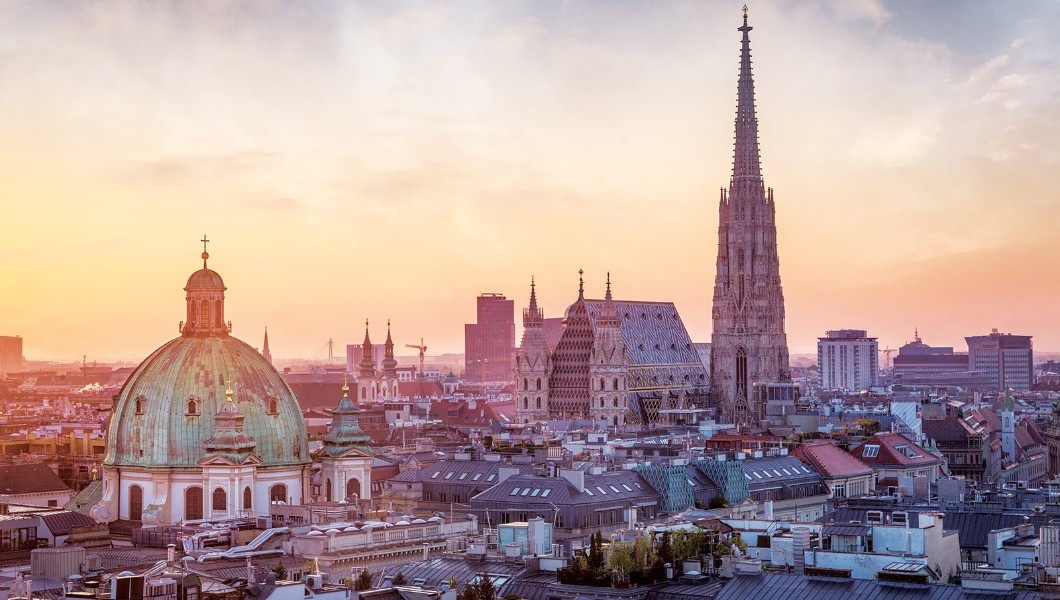 A departure from the gilded, stuccoed and frescoed communal areas, this light-flooded 83 sqm space takes on a more modern aesthetic, with huge colourful artworks, jazzy carpets and designer fabrics. The pièce de résistance has to be the black and white marble bathroom, accoutred with Asprey toiletries and heated floors, perfect for thawing out icy extremities!

Heavenly Plates
Despite having one of the city’s best steakhouses downstairs, I trade prime cuts for all-vegetarian fare at Michelin-starred Tian, located on nearby Heaven’s Gate Alley. Channeling modern Viennese Belle Époque, the high-stucco-ceilinged, chandelier-lit restaurant is the perfect lunchtime refuge on a grey day, with a palpable sense of gemütlichkeit. 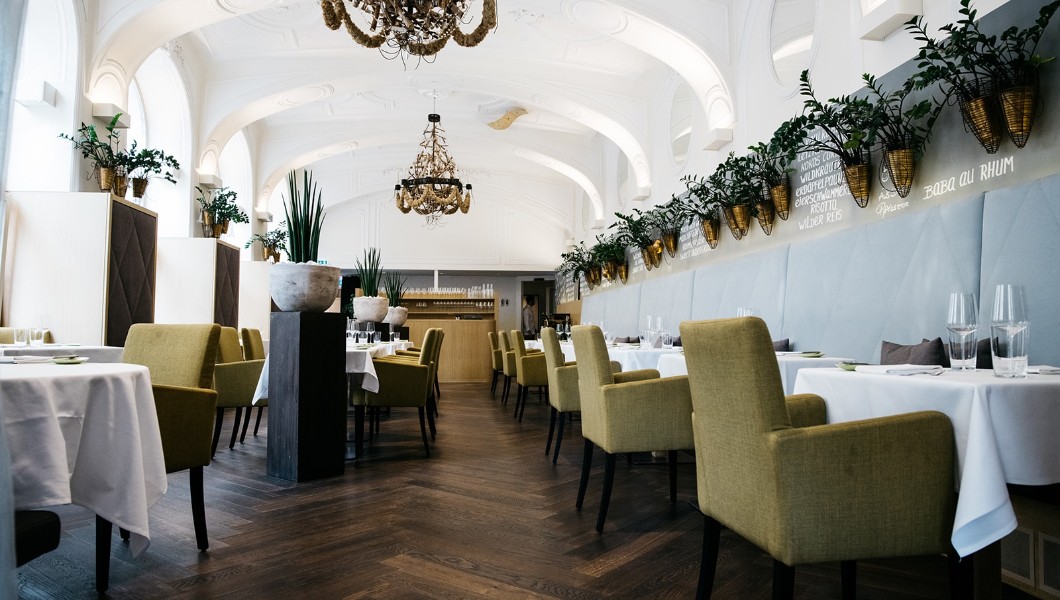 The lovechild of Croatian-born chef Paul Ivi and green-fingered owner, Christian Halper, Tian serves globally inspired dishes like Bull’s Blood Beetroot, melon and yeast and grilled Jerusalem artichoke with mountain hay broth. These whimsical works of art are often finished on the table with liquid delights, like chartreuse-hued sauces or a tea-infused nettle and spinach broth. Even the ‘sprouts with black radish and juniper’ will convert brussel skeptics. Much garlanded chef-sommelier Matthias Riha ensures the whole eight courses flow thanks to a stellar wine list that includes a 2016 Riesling Strass and a prized Hungarian Tokaji. Also leaving an impression is the 3-4 hour tasting menu’s bookends; an amuse-bouche of a marinated mushroom with marinated celery juice and liquorice tree that ‘sheds’ raw cocoa nibs. 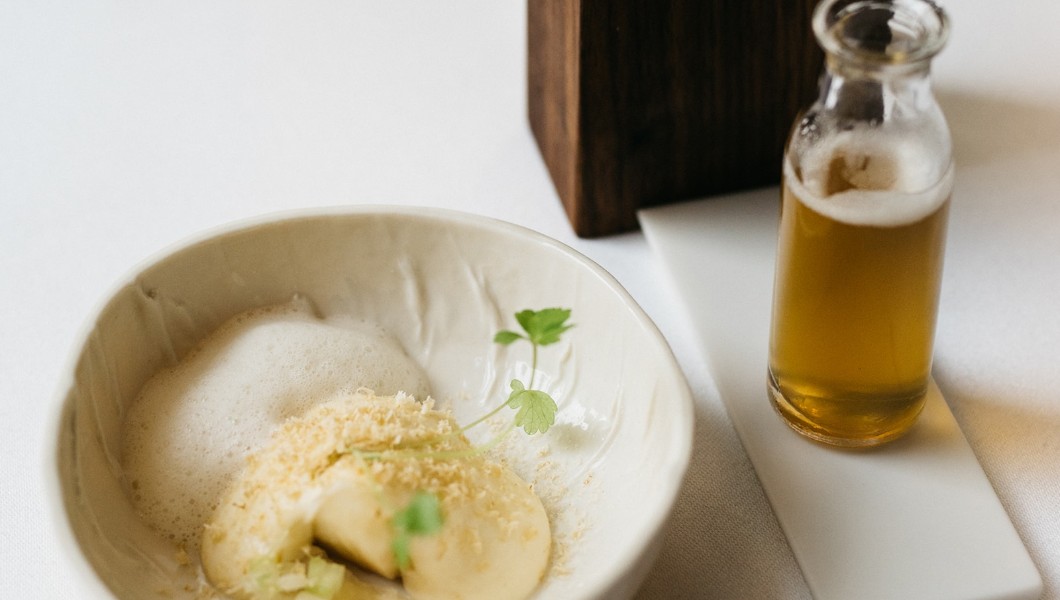 Roses and Royalty
Eight courses and the city’s longest pool aren’t exactly conducive, so I forgo the Ritz-Carlton’s basement beauty, retreating instead to its Guerlain Spa. Its signature treatment is a 90-minute long Imperial Rose Ritual, inspired by Vienna’s stately rose gardens and most famous royal consort, Empress Elisabeth. Volksgarten’s 3,000 rose bushes may not be in bloom, but you can still dedicate one to your other half, a lovely investment at $400 for a five-year tenure. Roused by fragrant wafts of rose geranium, I stretch out my newly invigorated limbs across the cobbled grand square of the Hofburg Palace, at one time the powerhouse of the Austrian empire. I watch on as the city’s fiakers (horse-drawn-carriages) draw sinewy shapes in the snow, clouds of vaporised breath revealing the biting cold. 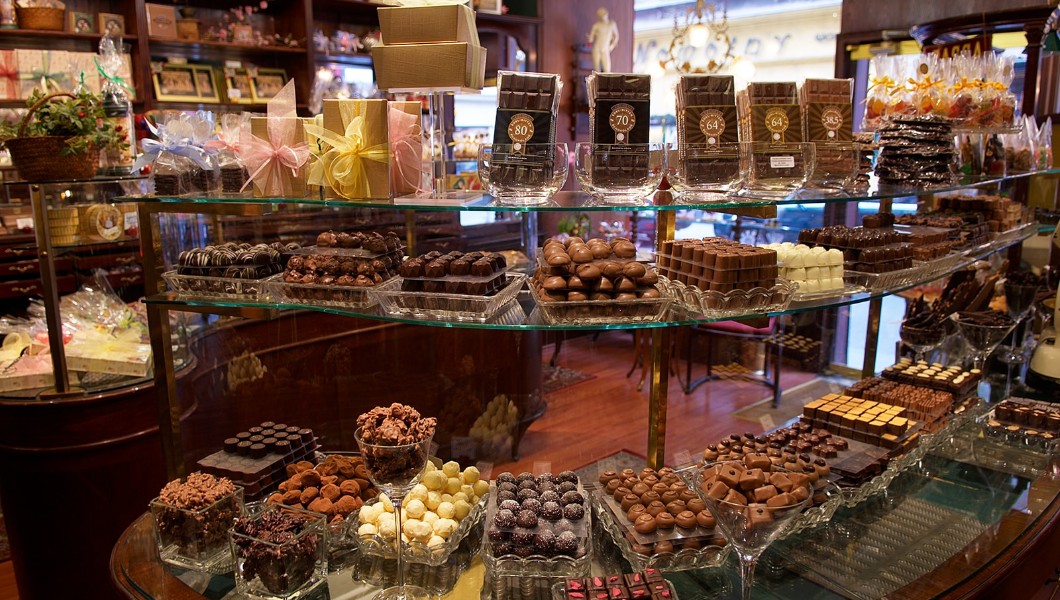 These days you don’t need a royal invitation to enter the sprawling complex’s 18 wings, 19 courtyards and 2,600 rooms, many of which are open to the general public. There’s a cruel irony in Empress Elizabeth’s (its most famous former resident) long battle for privacy, the Princess Diana of her day. As well as being one half of the country’s longest-ruling couple, Empress Elisabeth or ‘Sisi’ became a cult figure, idolised for her transcendent fashions and beauty, often rebelling against Habsburg protocol. 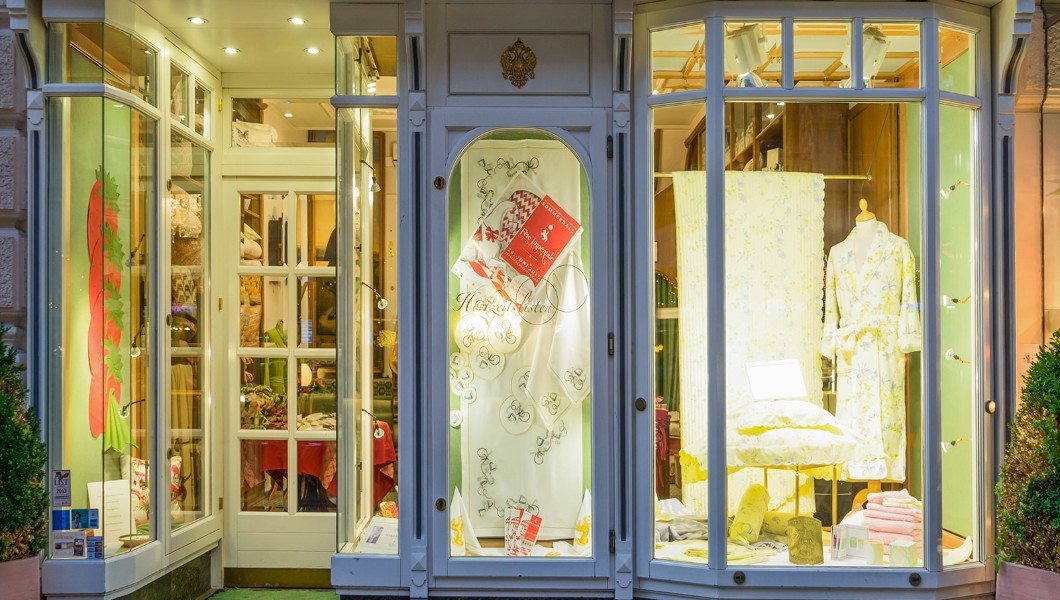 Born into lower Bavarian royalty, in 1854 she was married off to Emperor Franz Joseph, the most eligible bachelor in Europe at the time. The Palace’s superb Sisi Musuem offers a glimpse into her two very different lives (private and public) – showcasing jewels, costumes, portraits, instruments and letters. In the Hofburg’s Imperial apartments you can wander through several of her personal chambers and gymnasium, where she would work out for up to an hour a day in full corsetry! A woman after our own hearts, the yacht-owning Empress had an appetite for wanderlust, which tragically led to her untimely death at the hands of an Italian anarchist in 1898, at Lake Geneva.

Now, 120 years later, her legacy lives on. Immortalised by way of several monuments in the city, she has been the surprising muse for fashion giants such as Karl Lagerfeld, even inspiring one of his Chanel lines. You can buy modern interpretations of Sisi’s signature diamond star hair pins at A E Köchert jewelers, a seventh generation family business in the Old town. As well as specialising in diamond pendants and brooches, the iconic store displays archival pieces like the Empress’ diamond collars and tiaras. 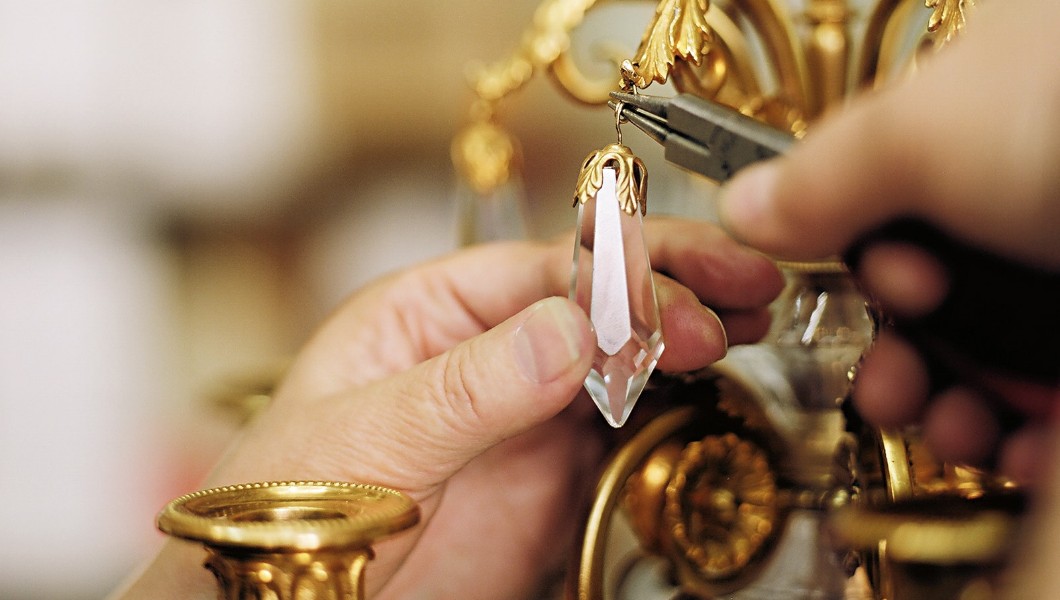 Shopping for Gemütlichkeit
It’s impossible to step into the three-story emporium of J. & L. Lobmeyr Glassmakers and not swoon. Its chandelier-festooned atrium is eternally romantic, drawing in passersbys from the historic Kärntner Straße. This is stop one of a curated shopping tour led by stylist and longtime city resident, Lucie Lamster Thury. Today Lucie is escorting me around some of the Old town’s former purveyors to the imperial and royal court, still bound by craft and tradition to this day. 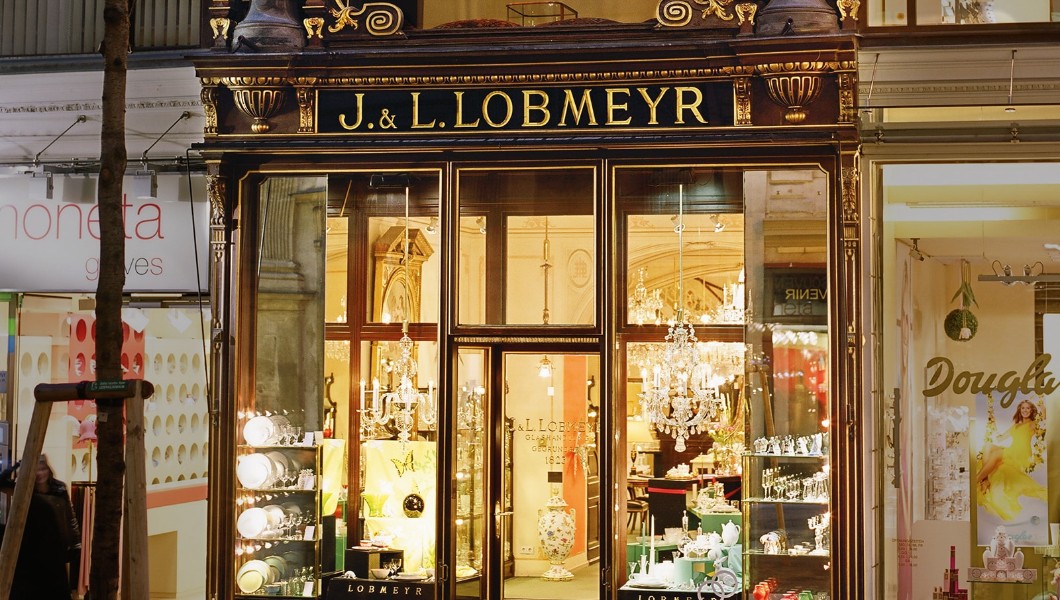 “J. & L. Lobmeyr made history with the first electric crystal chandelier in 1883 {with a little help from Thomas Edison} for the Vienna Hofburg Palace”, she explains. Founded in 1823 by master glazier Josef Lobmeyr, the store’s world-famous chandeliers now grace the likes of New York’s Metropolitan Opera, Mecca’s great mosques and the V&A London. Its glassware, meanwhile, can be found in Michelin-starred restaurants, the Kremlin and even Elton John’s living room! Prefer your gifts kleiner? Invest in some hand-painted porcelain or mouth-blown glass tumblers, safe in the knowledge that each piece is signed off by a Lobmeyr family member. 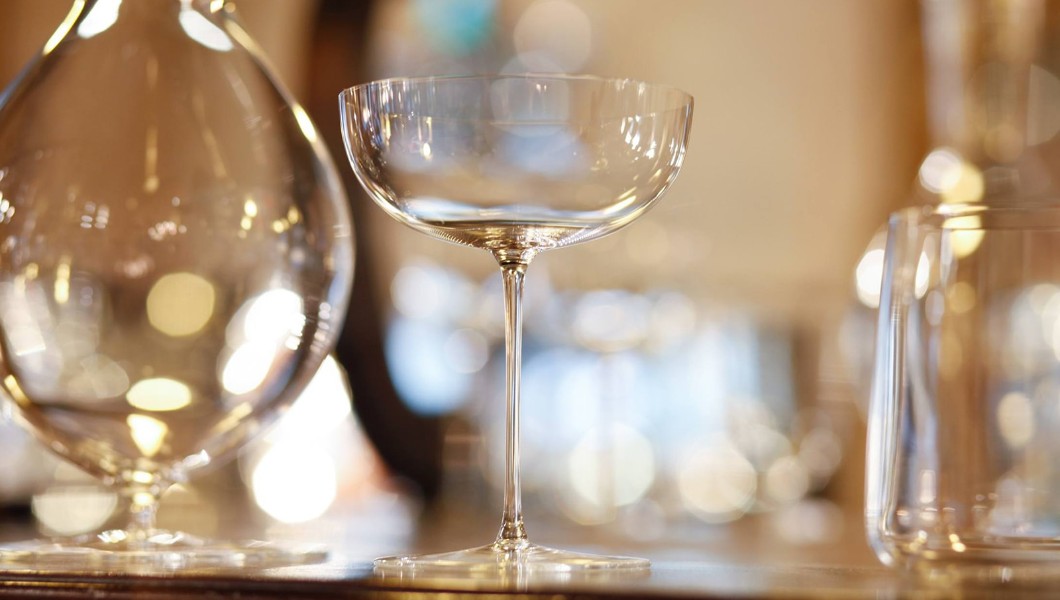 Our next port of call is Knize, “one of the giants of old-world tailoring” Lucie tells me. Located on the corner of Stephansplatz, its Adolf Loos-designed marbled façade and black granite portal has made it one of the most iconic storefronts on the Graben. Pronounced “Key-needge”, this is where the Habsburg archdukes got measured up and now politicians, or anyone who can afford its suits’ eye-watering $9,733 price tag. For this you get a British cut two-piece, crafted from Knize’s trademark dark grey Fresco cloth, crafted with 2,000 handmade stitches (fabric is extra). And if you want to smell the part, there’s their eponymous cologne line, first launched in 1924. In truth, a visit here is as much about the English Gentlemen’s club atmosphere and admiring its coffered wood interior, as the tailoring. Suffice to say, Knize has enough gemütlichkeit to go around the entire Graben!

A hop, skip and slide across the cobbles and we find ourselves at another storied shop, so beloved, it even has a street named after it. Deemed the oldest linen shop in Europe, Zur Schwäbischen Jungfrau was founded in 1720 by a Bavarian fabric trader. The first friendly face to greet you from behind its antique counter top is charismatic owner and former apprentice, Mrs. Hanni Vanicek. Once supplier to the the Imperial and Royal Court, the store now furnishes the King of Malaysia’s palace and counts the Sultan of Pahang amongst its royal clientele. If you like your bedcovers monogrammed (like Sisi) or table linen embroidered with real gold, you’ve come to the right address.

Sensing the need for another dose of gemütlichkeit, Lucie whisks me across the road to Leschanz Chocolate Makers, a small Viennese family business that’s been handcrafting chocolates for two decades. Formerly the famed Knopfkönigen (button shop), it’s now where locals come to refuel with steaming hot chocolate ladled straight from the pot. Nostalgia clings to its 19th century interior, fitted with ancient cabinetry and endless draws of truffled treats and the store’s signature button-shaped chocolates. Owner Leschanz (formerly head confectioner at the city’s lauded Hofzuckerbäcker) doesn’t get the nickname Wiener schokoladenkönig (Viennese chocolate king) for nothing! I fill my boots with “cat tongues” (a typical Austrian speciality), and am tempted by their sacher torte, a decadent cake presented in a wooden box.

Our final stop is Mühlbauer, a household name in Austria “that still stretches straw hats on wood” Lucie reveals. Fourth generation hatter, Klaus Mühlbauer’s celebrity fans include Meryl Streep and Lady Gaga. Every headpiece, from its Mühlbauer turban to the paper panama trilby, is crafted in its Vienna workshop, and decorated with the brand’s iconic silver hatpin.

Put a ring on it
Trading one iconic Ringstrasse address for another (and downsizing from four to three palaces), I decide to make a leisurely morning out of checking into the heritage-listed Palais Hansen Kempinski. A statement-glass lift that cuts through a central atrium is the best way to make sense of the hotel’s neo-classical-meets-modern aesthetic. The lobby lounge (complete with grand piano and velvet furnishings) fans out to Michelin-starred Edvard, an in-house deli, florist, bar and Vienna’s largest cigar lounge, framed by listed Doric columns.

The Kempinski group doesn’t do things by halves, and its Vienna outpost is no different. Its mezzanine floor boasts an indulgent 800 sqm Turkish-style spa (cue the gemütlichkeit), whilst rooms take technology to the next level with bathtubs controlled by integrated one-touch buttons. I waste no time in making myself at home in my 60 sqm Ring Suite, which marries the ambience of 1920s glamour (think art deco style lamps) with sleek maple wood furnishings and marble-clad bathrooms.

Ageing Well
Vienna’s love affair with the grape can be traced back as far as 132 AD. As well as a rich wine tavern heritage, the city is home to several impressive underground cellars, like Palais Coburg, my subterranean destination this afternoon. Steeped in medieval history, its historic stone vaults were once part of the city’s 16th century fortifications. With a 60,000-bottle inventory (Europe’s second largest) that spans four centuries and valued at a staggering $26-million, there’s still reason to keep it safely guarded. The highlight of the 90-minute tour has to be its rare wine cellars. After the obligatory selfie with its six-litre imperial bottles of Bordeaux, there’s the oldest drinkable wine in the world (a ‘not for sale’ Riesling dating back to 1727) to decipher the dusty label of.

These labyrinth cellars are positively gemütlichkeit, but that doesn’t stop me yearning for the crisp embrace of Vienna’s snow speckled streets and spires. And so the love affair with cosy armchairs and brisk walks, frescoed ceilings and frosty skies, continues. I’m just hoping the city wears her white winter jacket for a little while longer…