Four gorgeous properties to call your home, from Madrid to Bangkok to Vietnam

Kempinski is taking healthy living seriously at its second urban resort in Thailand, with the grand opening of Sindhorn Kempinski Hotel Bangkok. Situated at the edge of Lumphini Park, the green heart of the city, the hotel promises an immersive wellness experience from the moment you arrive. Central to the experience is Sindhorn Wellness by Resense, an integrated spa, wellness centre and fitness studio with two floors of workout studios hosting live and virtual classes covering everything from HIIT and CrossFit to cycling, yoga and Pilates.

Multi-day wellness journeys focusing on detox, rejuvenation and prevention include advanced treatments with Dermalux phototherapy facials and pressotherapy, and the Moroccan hammam is central to a thermal wellness journey that includes bio and salt saunas, cold chamber, aroma steam room, rasul mud room and a tepidarium lounge with spectacular city views. The 285 soundproof rooms and suites, each of which has its own private balcony, range from 66 sqm Grand Deluxe Rooms to the opulent three-bedroom Sindhorn Royal Suite. Interiors complement the green expanse of Lumphini Park with natural colours and motifs, as well as touches that pay homage to local culture and craftsmanship.

This month sees the opening of the much-anticipated Capella Bangkok, a striking, architectural marvel on the banks of the Chao Phraya River in Charoenkrung, the city’s fast-emerging creative hub. Guests in the hotel’s 101 rooms, suites and villas, each featuring floor-to-ceiling windows and a balcony or veranda, will have front-row seats to the ever-unfolding spectacle of life on the River of Kings, criss-crossed by a parade of longtail boats and barges.

Accessible via a private courtyard, the generously proportioned one- and two-bedroom riverside villas have their own tropical garden with plunge pools and cosy waterfront salas. Interiors are courtesy of San Francisco interior design studio BAMO, which has lent its artistic touch to landmark projects for some of the world’s leading luxury hotel companies. Guests can find modern-classical French and Italian cuisine courtesy of Michelin-starred chef Mauro Colagreco at Côte, garden-grown Thai cuisine at Phra Nakhon, and artistic, tailor-made patisseries at Stella.  The hotel marks the first phase of the Chao Phraya Estate, a 14-acre waterfront development imagined by Hamiltons International. 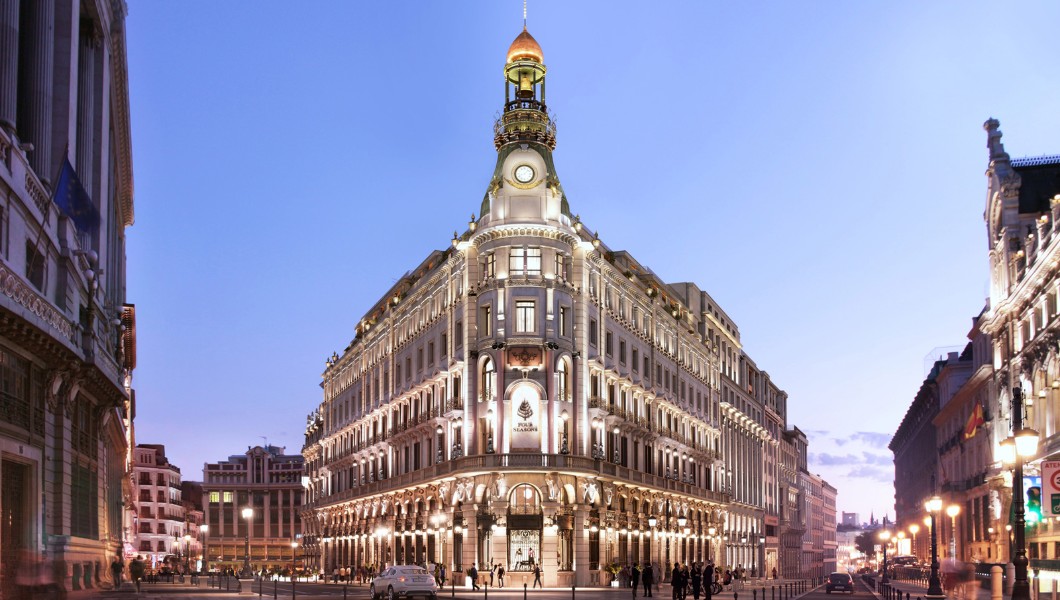 Situated a stone’s throw from Kilometre Zero, the point from which all distances in Spain are measured, Four Seasons Hotel Madrid is destined to become the new heart of the Spanish capital. Architectural firm Estudio Lamela has spent the last seven years restoring two old banks and five other historic buildings that together form the Carnalejas Centre; home to 22 Four Seasons Private Residences and a luxury shopping mall in addition to the hotel.

Tasked with protecting the historic detailing within the buildings, the company preserved some 3,700 artefacts during the restoration, imbuing this iconic property with more than a hint of old-world opulence. Among the 200 guestrooms and suites, the triangular-shaped Royal Suite stands out as the most lavish, with moulded ceilings, shimmering chandeliers and Juliet balconies. At rooftop restaurant Dani, Andalusian cuisine from Michelin-starred chef Dani Garcia; while first floor gastrobar Isa serves modern tapas with Asian flavours and imaginative cocktails. The hotel’s spa steals the title of largest in the city, with four levels with eight treatment rooms, salon and a sky-lit indoor pool and a rooftop terrace.

Vietnam’s central coast is a magnet for foodies, with countless local farms supplying an abundance of fresh ingredients and miles of ocean providing rich pickings for fishermen. As the first in a series of new properties from Fusion Hotel Group dedicated to culinary excellence, Maia Resort Quy Nhon aims to immerse guests in the gastronomic traditions  of Vietnam. Set in landscaped gardens on the coast of Binh Dinh Province, the resort is home to  32 villas with 62 more to come in the second phase of the project. Foodie experiences are based around V Restaurant, which means taste in Vietnamese.

Overlooking the waters of Phuong Mai Bay,  V features live cooking stations showcasing the best regional produce and seafood. December will see the opening of Vela Spa, where culinary-inspired treatments – think beer and malt scrub or a grapeseed oil massage – will incorporate organic, all-natural  products free from gluten and parabens. Culinary adventures can be found at local restaurants in the town of Quy Nhon and nearby fishing villages, separated by hidden coves, isolated beaches and offshore islands. The surrounding countryside is peppered with cultural sites including the dramatic 11th-Century Banh It Towers, one of the best-preserved Cham architectural sites in Vietnam.