As late summer swoops in, we meander towards Mykonos to cavort with the crowds, but also to scratch beneath the surface of the Cycladic isle, to uncover its secrets, from maximalist to minimalist

Thoughts of hedonism, celebrities, parties and glamour swirl around my head as I arrive on the Greek island of Mykonos. Since the Swingin’ Sixties, the island has hosted A-list celebrities and those who embrace an alternative lifestyle. It is commonly touted as the most exclusive and expensive of the Cycladic isles, and I am curious to uncover its enduring appeal. Such is the allure of the island that we had to reserve our beach days and meals weeks in advance. At first glance, this dry island is by no means the most beautiful in Greece, but the summertime atmosphere is palpable even at the airport. As our taxi inches closer to our hotel, which sits in privileged proximity to the town centre, Chora, the enchanting sugar cube-like architecture, complimented by the blue hues of the Aegean Sea, becomes apparent. 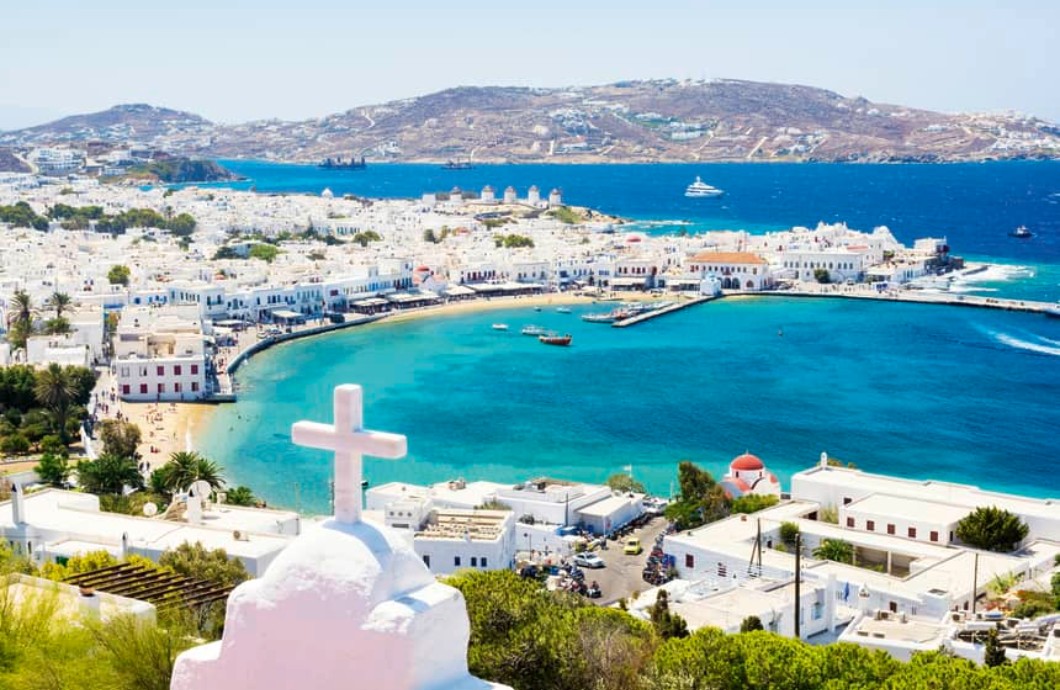 Hotels in Mykonos take their lead from ritualistic Greek hospitality. There are no big-name hotels here, just boutique, often family-run establishments with design aesthetics that pay tribute to the surroundings. Over time, certain hotels have gained in popularity due to their esteemed clientele. The likes of Kendall Jenner, and Gigi and Bella Hadid have all stayed at celeb approved Cavo Tagoo Hotel, as proven by their Insta posts. Most of the über-rich, however, take in sun and sanctuary on their yachts, venturing ashore only in time to party. We are lucky enough to secure split-level rooms at Absolute Mykonos Suites, housed in one of the last remaining traditional windmills on the island. This affords us the privacy of a home but access to all the 5-star hotel amenities, the best part being just a seven-minute walk to the centre of Chora. 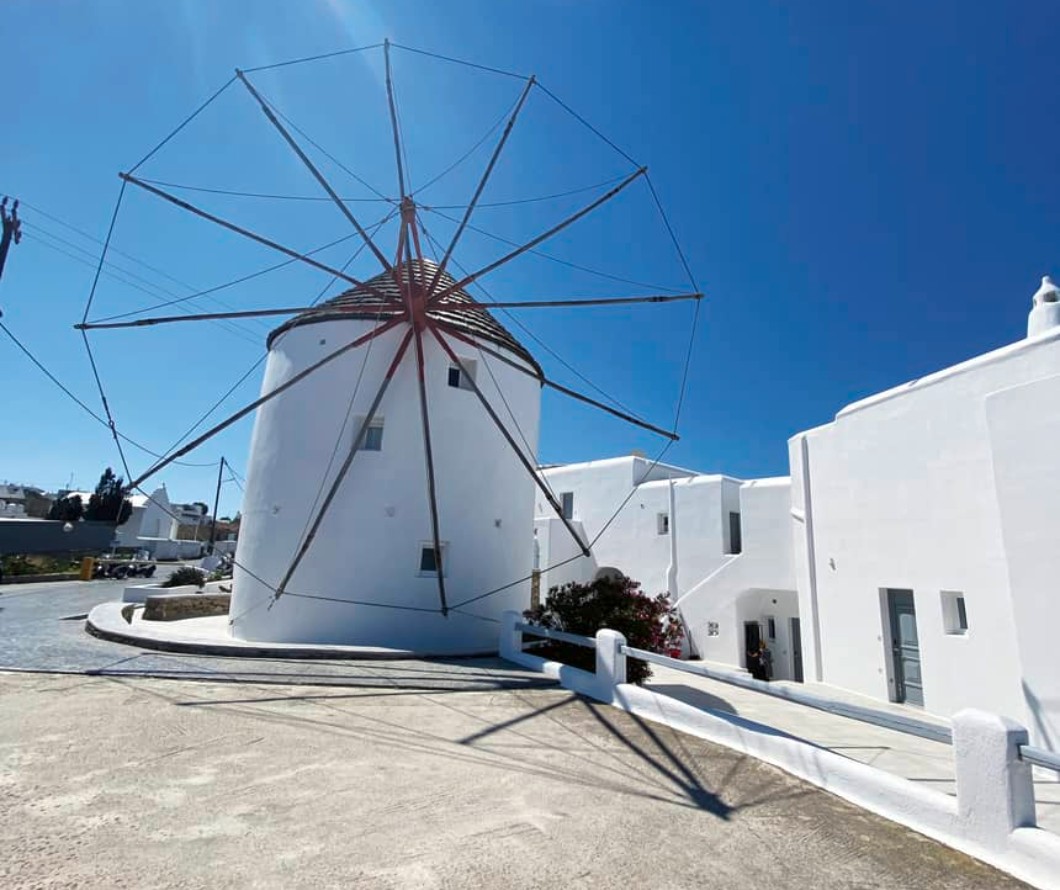 We stay at Absolute Mykonos Suites, housed in one of the last remaining traditional windmills on the island.

Shades of nightlife on the island are as varied as the shades of blue that grace its wraparound seas. Eager to see all its facets we opt to start our evening with a stroll through the labyrinth-like alleyways of Chora. The core of the town is a maze, designed by the Mykonians centuries ago to protect them from strong winds and discourage invaders from finding their way. The narrow pebble-paved alleys are lined with blinding-white cubic buildings, framed by bright blue doors, and accentuated by pink bougainvillea making them quintessentially Greek. Every colourful door leads to a shop, bar, or art gallery, interspersed with countless little chapels. Here, I start to get a sense of Mykonos’ varied dining scene from plastic-tabled souvlaki shacks, to slick, white-tableclothed fine-dining eateries. Led by an increasingly salty scent and hordes of other visitors we head to the picturesque neighbourhood of Little Venice. 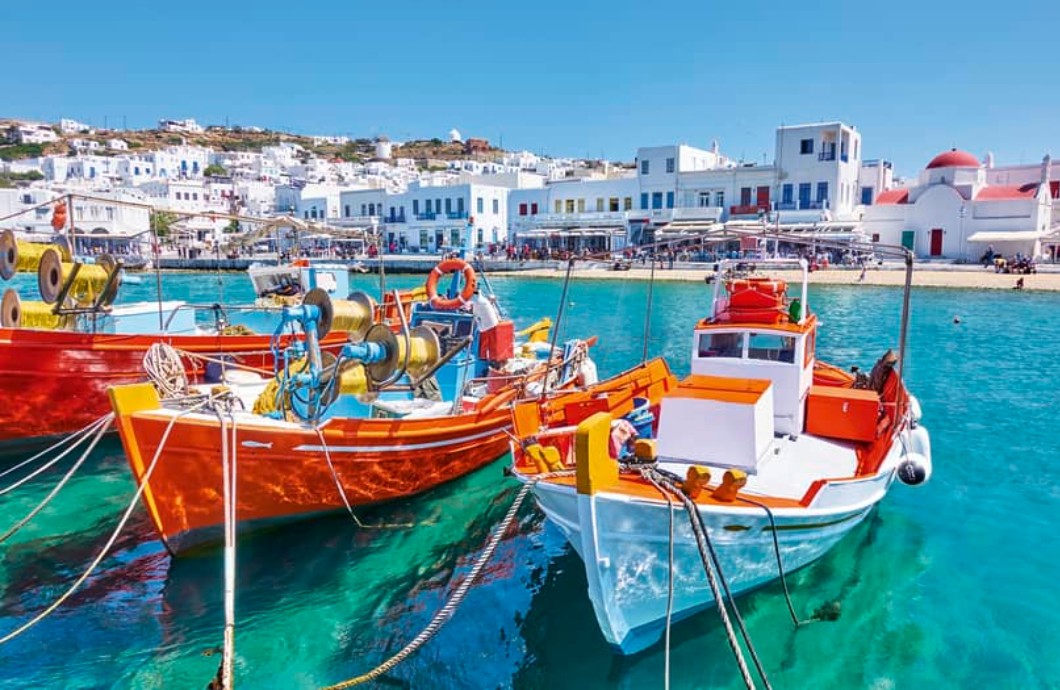 The architecture begins to change, whitewashed stone houses give way to splashes of colour in the wooden doors, windows, and balconies of the old houses that are situated precariously close to the sea. Construction of Little Venice is estimated to have taken place from the 13th to the mid-18th century when the island was under Venetian rule. The rows of medieval fishing houses hanging over the water’s edge used to house wealthy captains and shipping merchants. Today, they have been converted into chic bars which retain an old-world charm, offering a welcoming air of nonchalance. Against a backdrop of pulsating music and tourists jostling for the best seat from which to watch the famed sunset, we take our seats at Gryparis bar. Our waiter is quick to warn us that we are in the ‘splash zone’, but the 180-degree view is too tantalising to resist. It runs the gamut from the Venetian houses to the Kato Myloi, a cluster of five of the 16 iconic windmills of Mykonos, which have become a symbol of the island. While no longer operational, they are testimony to the island’s agricultural past. Some have even been converted into museums, the most famous being Boni’s Windmill. 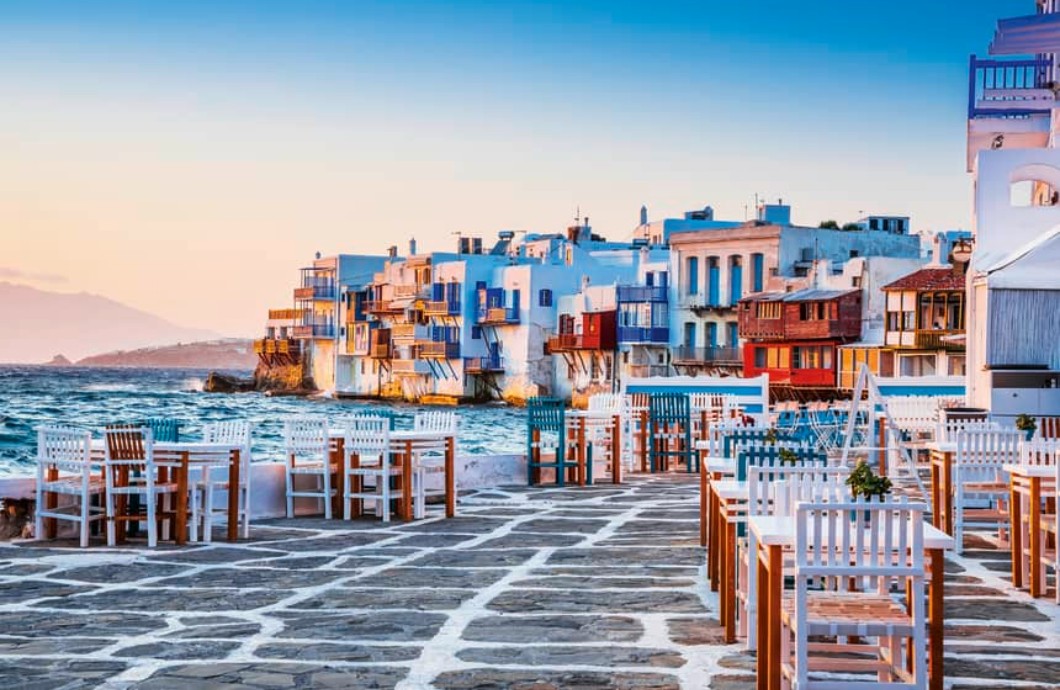 I had heard much about the transcendental quality of the sunsets here. Experiencing it first-hand I can understand why visitors clamber to film the last of the sun’s rays dancing and flickering across the sea as a single vessel sails by in the distance. With the moon above us, signalling the start of a promising night we walk the short distance to Lio – an outpost of the famed restaurant-cum-cabaret in Ibiza. A clandestine door opens into an intimate, low-lit, al fresco space where scantily clad performers are already busy entertaining dinner guests at their tables. A sensual modern interpretation of a cabaret show unfolds. Even the wait staff performs vignettes, creating an atmosphere where everyone is encouraged to get up and dance. Clearly, the focus here is less on the food and more on the entertainment. 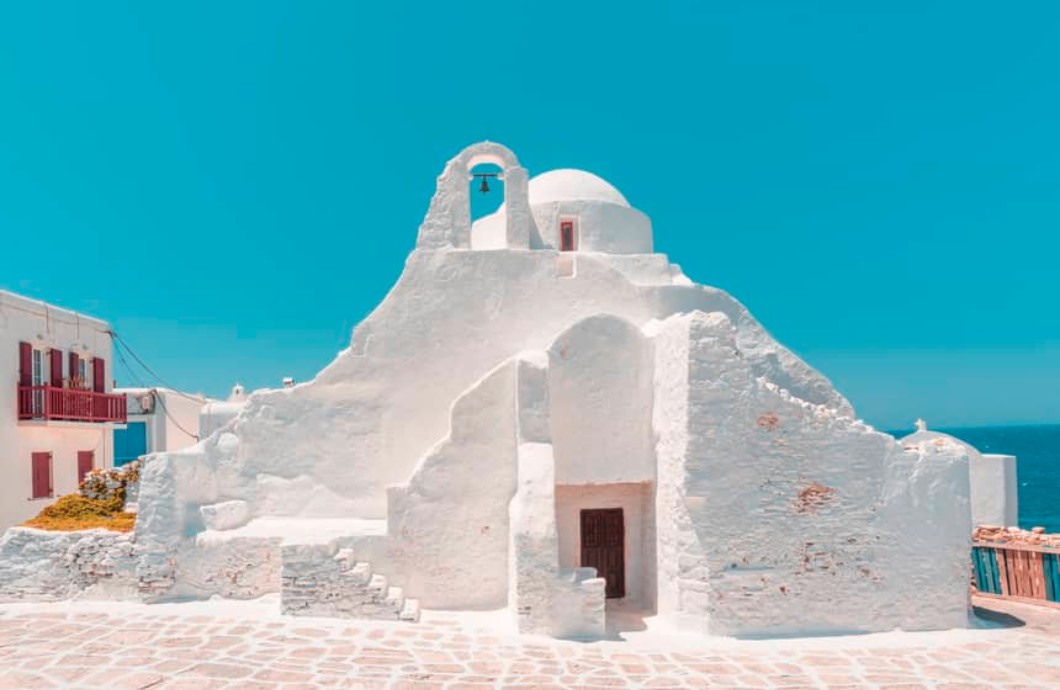 The next morning a windswept al fresco breakfast at the hotel has me energised for the first of my many beach club experiences in Mykonos. Recommended by friends for its specific ‘vibe’ – one that I would not come to appreciate until I had done the beach club rounds – we head to Alemagou at Ftelia beach. The best option to get around the island is by taxi unless you enjoy the thrill of riding ATVs around the windy roads. Friends had been kind enough to share the number of a driver ahead of time and we used him with a pre-set rate throughout our trip. Alemagou is exactly the kind of bohemian spot I had expected to experience on the island. Taking inspiration from traditional Greek tavernas, Cycladic architectural and design elements come together to create a relaxed atmosphere where laid-back parents watch their children build sandcastles, friends lie around on beach beds sipping fruity cocktails, and windsurfers take advantage of the strong island winds. 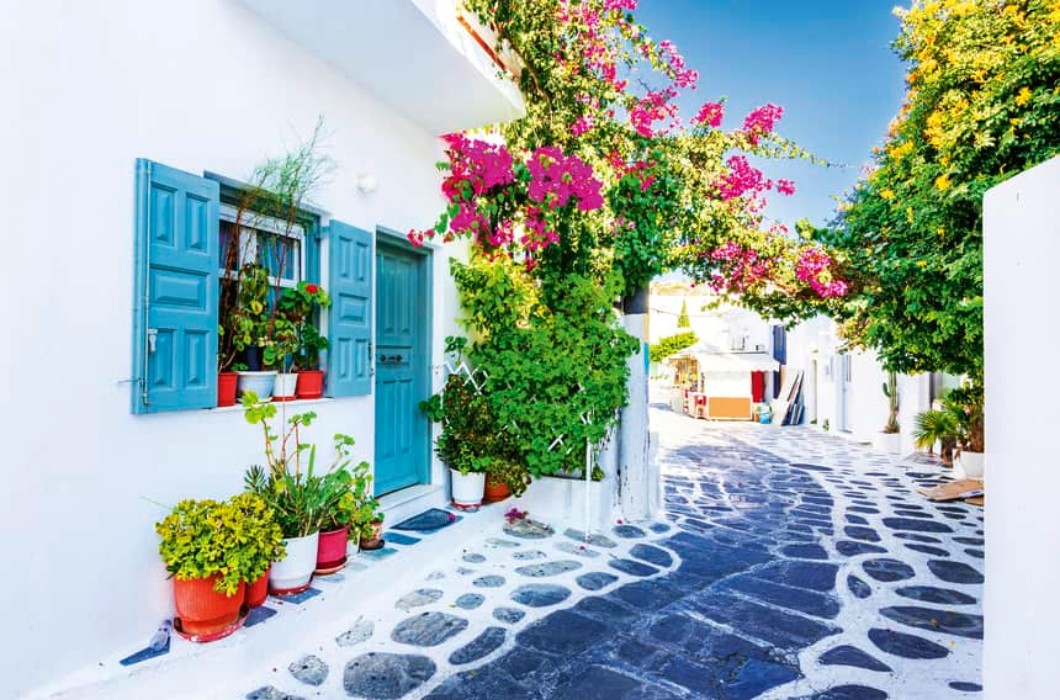 Lunch is served under a thatched roof where light and air flow naturally through the open space. Stylish folk decked out in the current season’s designer outfits enjoy well-loved Greek recipes re-examined with a modern twist. After a day of lounging in the sun, we head to Coya to indulge in pre-dinner cocktails and await our midnight dinner reservation at Noema. 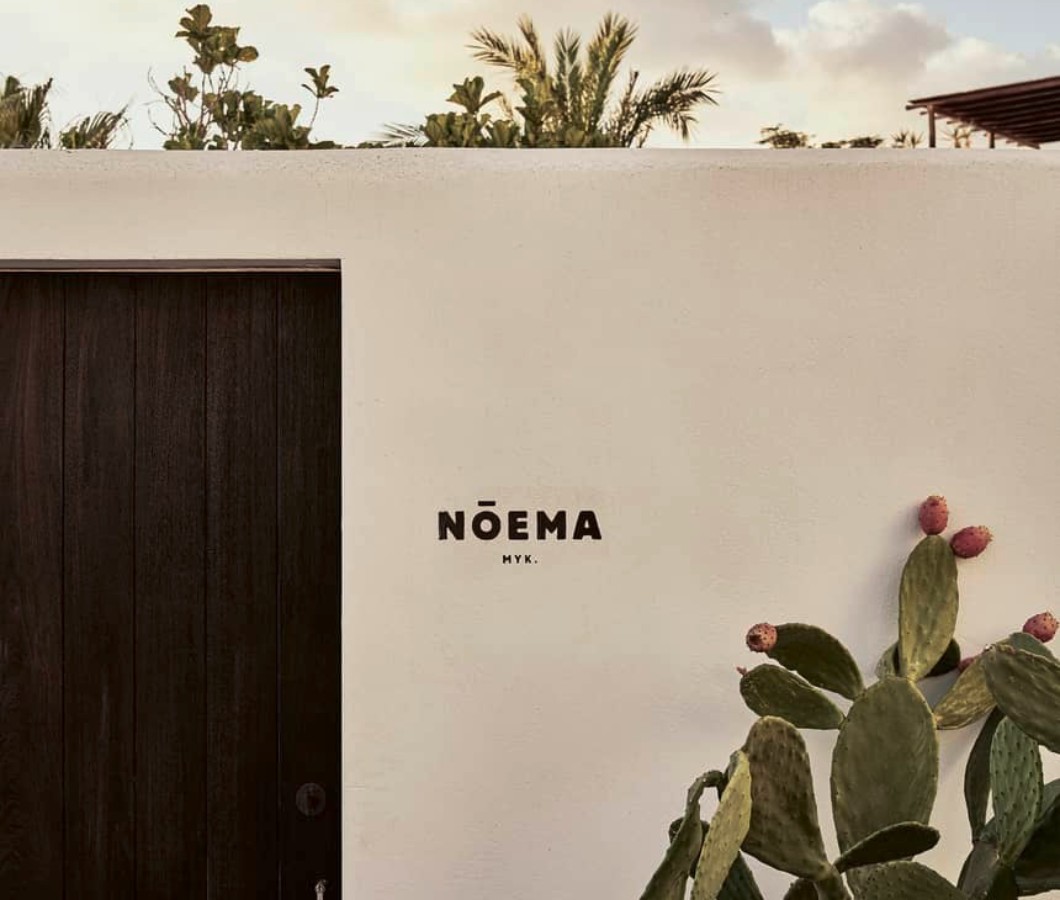 Tucked away, behind a maze of meandering back-alleys and sleepy whitewashed houses in the heart of Chora, Noema is the new see-and-be-seen dining spot. The brainchild of Soho House’s co-owner, Richard Caring, it is an oasis of understated sophistication inspired by vernacular craftsmanship in subdued palettes of charcoal, reflecting the island’s granite boulders. Centred around a spacious courtyard, the idea is for friends and family to come together to eat, drink, and socialise mirroring the ambience of a typical Cycladic house’s avli (patio). Underpinned by a farm-to-table philosophy, food is shared taverna-style, in line with the island’s communal feasts. DJ sets are interchanged with live sessions, and we were treated to live African bongos as the crowd dances the night away. 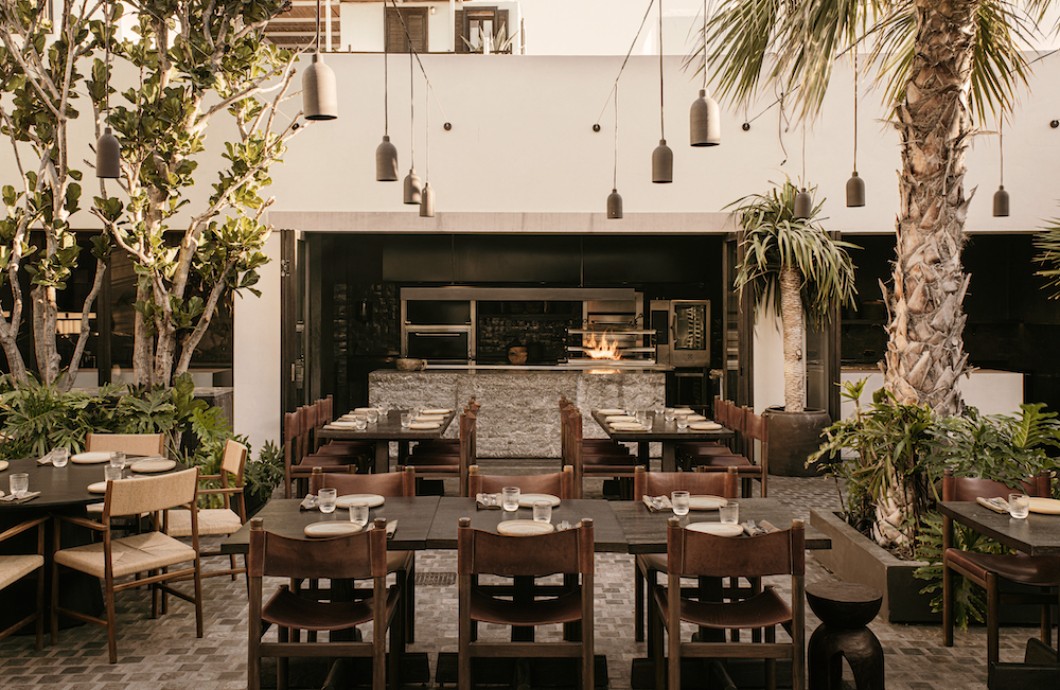 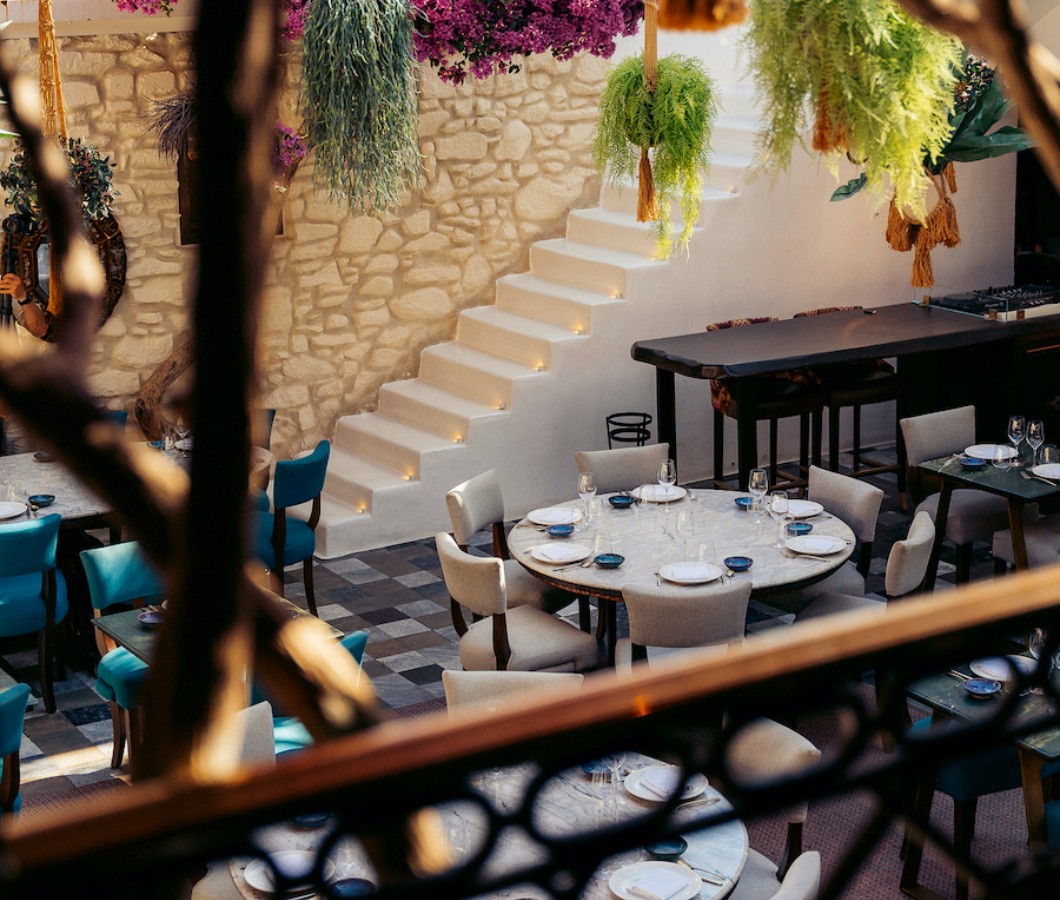 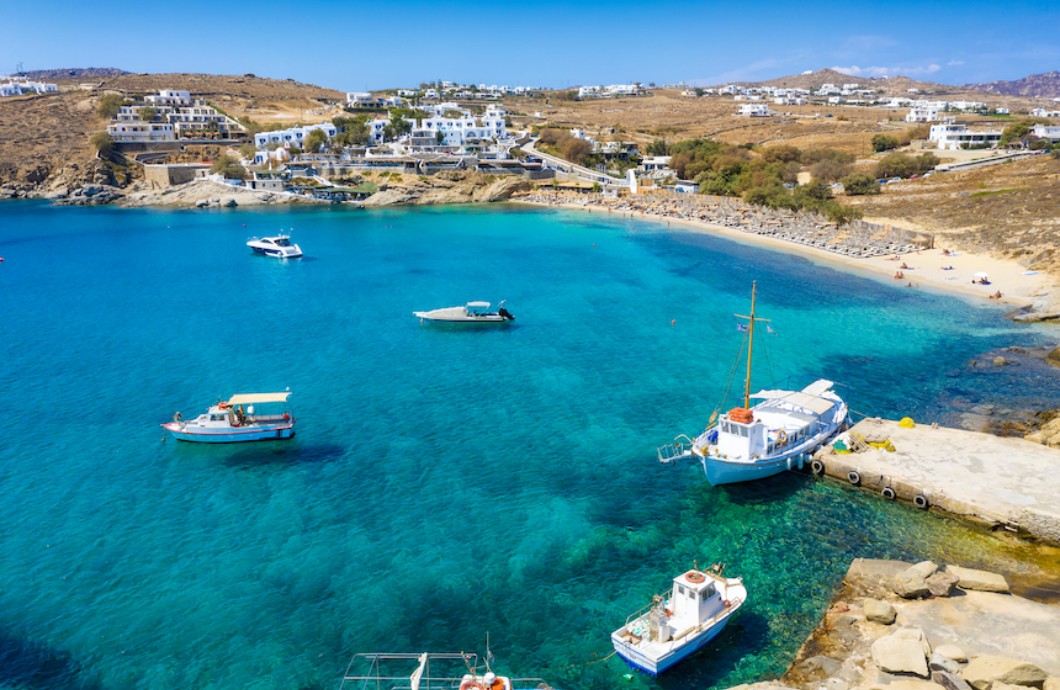 The following day we trade in a pre-booked beach day at Principote for the quieter and calmer shores of Agia Anna beach. While Principote is high on the list of recommendations, the wait times and intense queuing isn’t for us. The highlight of the day is lunch at Spilia restaurant. Set in a hidden cave high up on the cliffs, buffeted by the waves of the Mediterranean Sea, Spilia is one of Mykonos’ best-kept secrets. The simple taverna aesthetic is enhanced by octopus hanging out to dry. The views are further boldened by the fresh seafood – the salty grilled fish left us licking our fingers – and zesty Mediterranean salads. It isn’t rare to spot the likes of Elon Musk feasting on the restaurant’s delights. 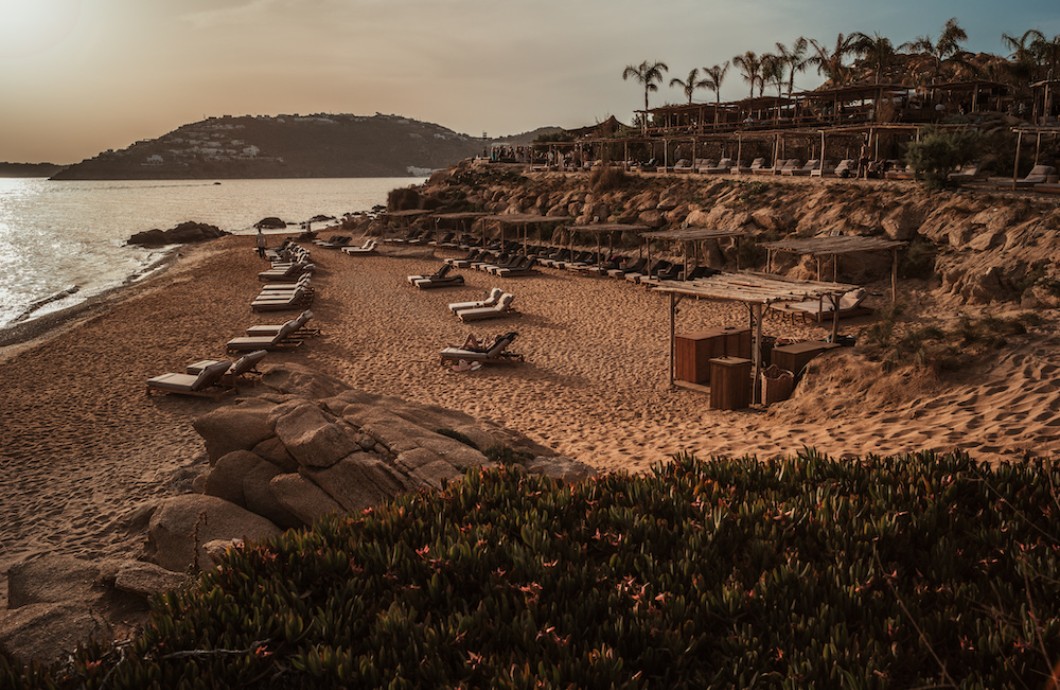 No trip to Mykonos would be complete without a beachside rave, and there is no better place to enjoy this than Scorpios – now part of Soho House. Scorpios is a unique breed of lifestyle commune for nomads, where multifaceted Mykonos is showcased at its best. Revellers can party 24/7 should they wish, foodies can indulge in exclusive gastronomy, shoppers can shop into the night, and mystics can simply marvel at the spiritual seclusion. Nestled within the wild wonder of a protected natural reserve and overlooking Paraga and Kavos lagoons on either side, panoramic sunset views are the backdrop to the parties. 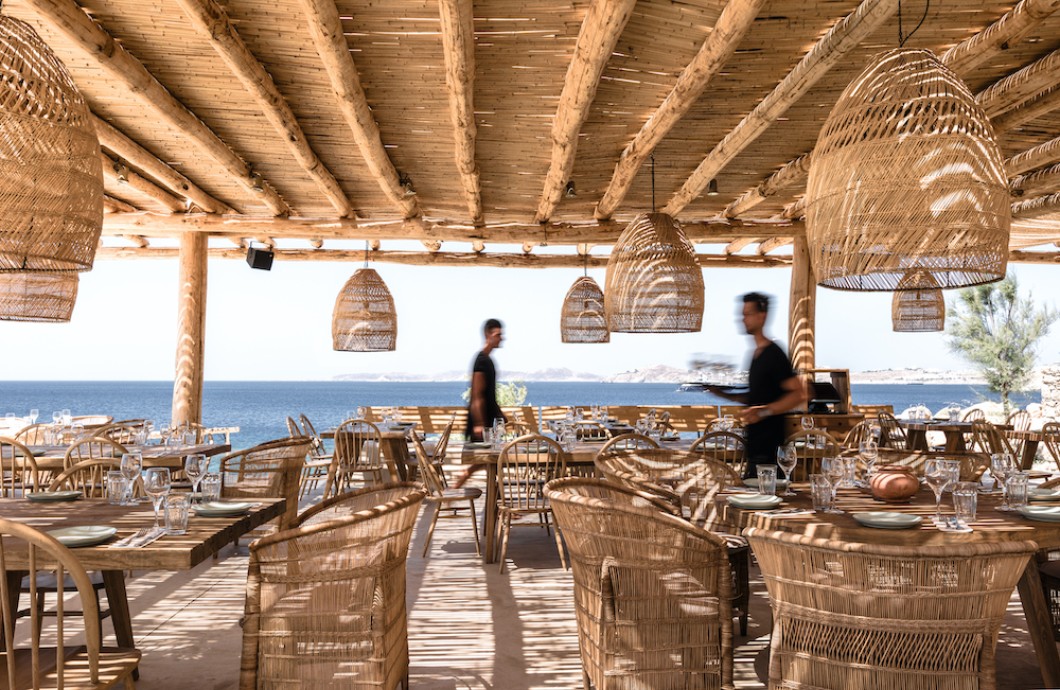 As the party commences at the multilevel venue, crowds gather around the DJ set, a turban-clad mystic offers face and body painting, and diners feast on culinary delights – leaving me salivating for my upcoming lunch here tomorrow. By day, I take in the rocky cliffs as I sit under the wood-slated roof of the rustic-chic restaurant. As the flame-grilled meatballs melt in my mouth and the zesty calamari tantalise my tastebuds, I make a mental Pinterest board of the beautiful bohemian interiors. Similar décor vibes can be enjoyed by those opting to stay at the nearby Soho Roc House enveloped in the same wild island energy of Scorpios, not to mention an A-list favourite on the island. 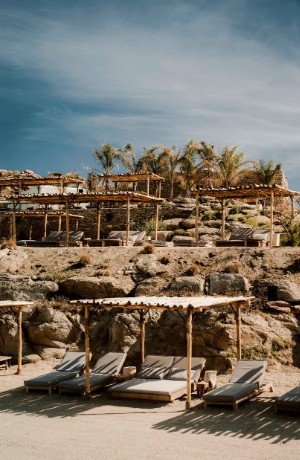 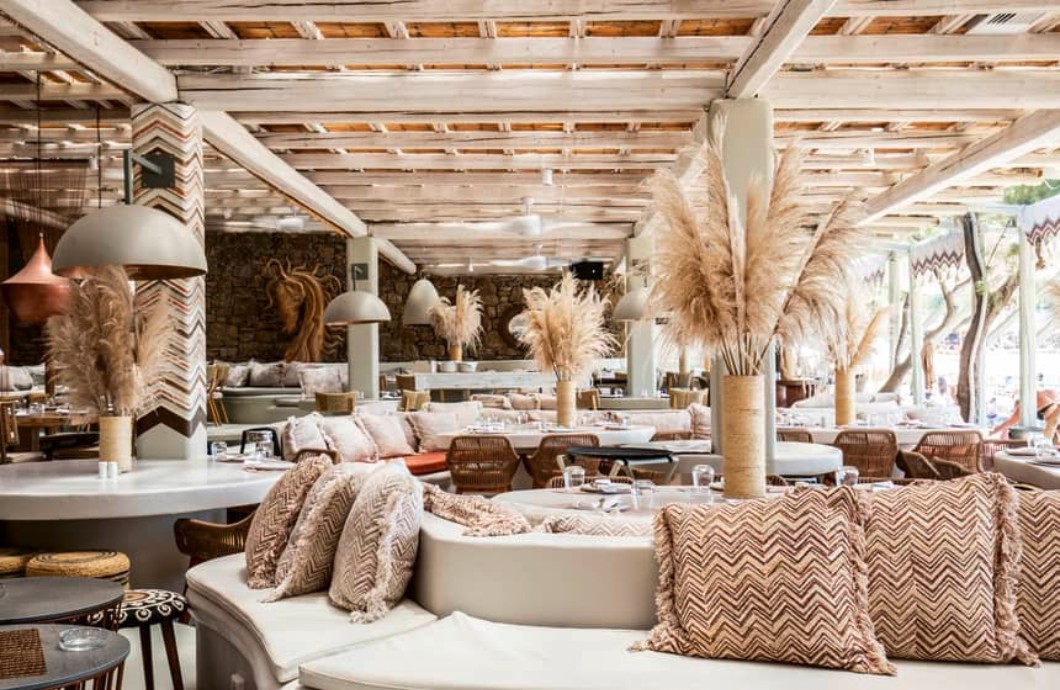 Our last day in Mykonos is always going to be a jaunty one. A morning which starts at the crowded Kalua beach club in Paraga, leads to lunch under the shade of an olive tree in their in-house restaurant. It isn’t the food which captivates me as much as the live singer belting out pop classics and the impromptu party which breaks out, complete with diners twirling their napkins to Greek music. The high rollers willing to pay the excessive premiums have their country’s flags brought out with ostentatiously priced Champagne bottles summarily sprayed upon them and their friends. 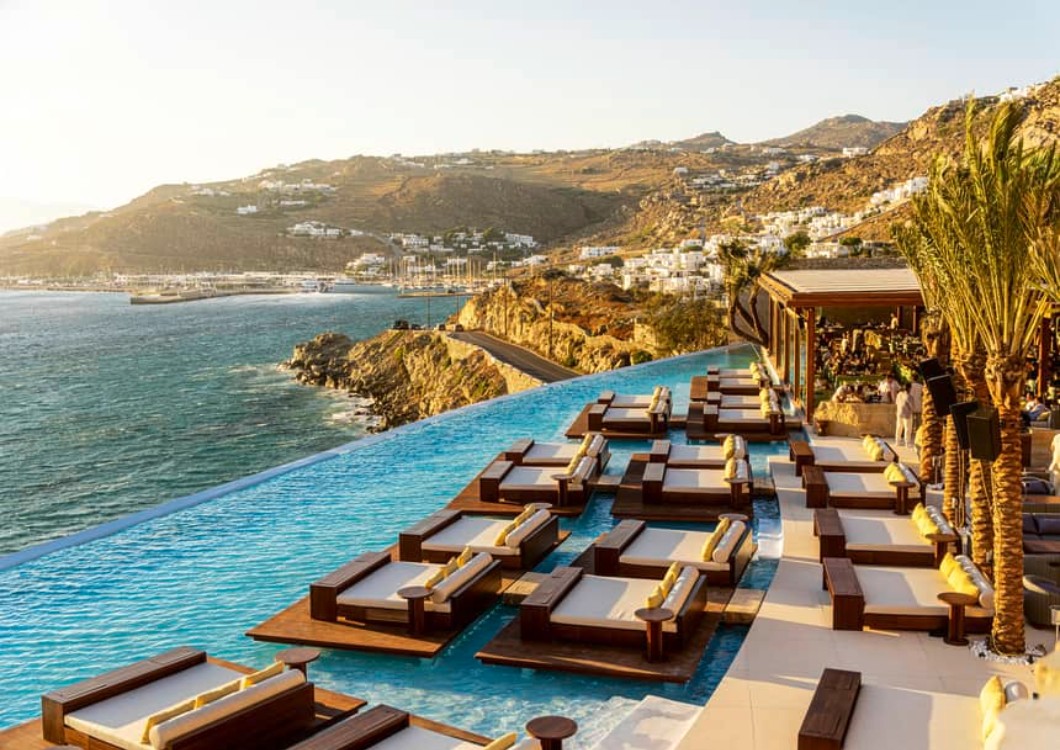 Then, on a whim and a last-minute invite from a friend who is on the pre-opening team for Zuma Mykonos, we hop across the island for a sneak peek of Zuma’s first-ever lifestyle concept. A cave-like entrance leads to a restaurant, lounge and bar atypical of Zuma, tucked away between craggy rocks. What takes centre stage is an infinity pool carved into a cliff, melting into the Aegean Sea. Flanked by sunbeds and a DJ spinning chilled house beat, this is the perfect setting for my last Mykonian sunset. A 20-minute stroll into Chora, through secret back alleys – surprisingly available on Google Maps – offers us a birds-eye view of the island, a jewel by night. Past the town’s open-air cinema, beneath the windmills, we take our seats for dinner, at the iconic hotspot, Sea Satin – now rebranded as Gryparis Restaurant. The crowd doesn’t come here for the food, they come for the post-dinner entertainment, complete with diners dancing on tables, cavorting between courses and general Mykonos merriment. Unwilling to end our night, we head to Interni for a nightcap. Tucked away on one of the most fashionable streets in Chora, the restaurant turns into a full dance party until 2 am. As we head out, a flash mob of dancers is walking down the steps, sparklers in hand waved in perfect beat to Greek music. 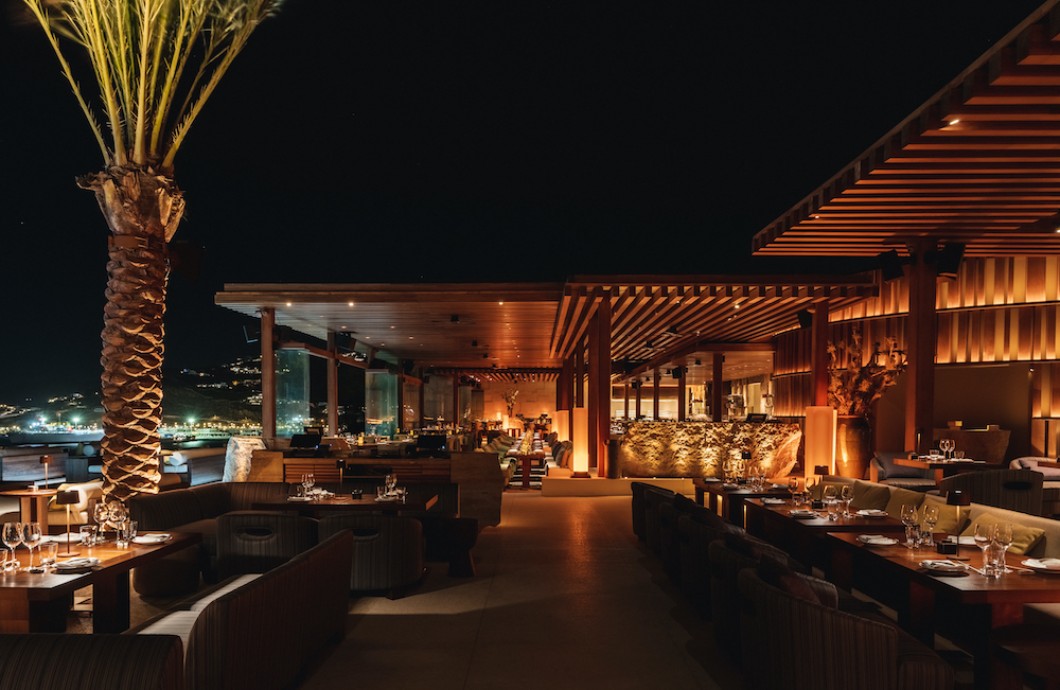 When you chat to the staff in Mykonos, it’s clear that everyone is hustling to make their money in the four months of the year when the island welcomes tourists. Hence the unapologetic decadence and elevated pricing that are all part of the Mykonos experience. As I leave the island, I can truly appreciate that the unbridled escapism and freedom that Mykonos offers is what keeps people returning to this mystical place time after time.