AFRICA: Once upon a desert dream

On the shores of the ethereal Makgadikgadi Pans, the reimagined Jack’s Camp redefines the experience of what it means to safari in Botswana

In the world of African safaris, Jack’s Camp is nothing short of an icon. When it first pitched on the shores of Botswana’s Makgadikgadi Pans a quarter-century ago it heralded a brave new era of authentic, immersive safari travel on the continent.

But, timeless as it was, the Camp had changed little since 2003, and was in need of freshening up. After a year of renovations and rebuilding, a thoroughly reimagined Jack’s Camp opened in January 2021; less a simple refurbishment of the old than a wholesale reimagining of the experience. This is no nip and tuck to stay relevant, but rather a dramatic evolution of the Jack’s Camp experience.

Jack’s – as the regulars dub it – has long been famous for its 19th-century campaign-style safari décor; tents of green canvas lined with plush fabrics, sheltering interiors piled high with playfully opulent décor. From a blood-red chaise longue in the bathroom to vintage wooden cabinets in the corner, the furniture in camp is all handcrafted in Botswana, while textiles from India and Morocco are sewn locally into cushions and bedspreads. Care, craft and attention to detail are evident throughout.

In that, certainly little has changed in the new incarnation, and each of the nine suites retains its sense of safari grandeur (each one offers the same opulent space and facilities, but suites five and six offer the most privacy, and the finest views). What’s new is the scope, with each tent doubling in size to stretch across 135 square metres, across inter-leading lounge, bedroom and bathroom tents. To ward off the cold of winter nights in the desert, wood-burning stoves are one of many new additions to transform the experience.

The outdoor deck extends the suites even further, with private plunge pools and daybeds swinging in the desert breezes. If you know a better place for a pre-safari afternoon nap, I’d be glad to hear it.

“You can’t go back, but you can always go forward,” explains Ralph Bousfield, founder and owner of Jack’s Camp, who named it for his father, a legendary hunter but later a pioneer of photographic safaris in Botswana.

In redesigning the camp from the ground up, realigning and enlarging the tents, Bousfield paid particular attention to keeping the desert tents cool, working with the environment, “and alignment with the sun to keep it in shade and provide the space to allow it to be kept cool. So the new Jack’s Camp was designed around that rather than just looking at the size.”

Sandy pathways link each tent to the communal areas, meandering through turpentine grasslands that now stand chest-high after a year of good rains. Above, fan palms rustle in the desert winds blowing out of the east, while raucous francolin screech their alarm calls as guests wander from their suite to the central ‘mess tent’. Unsurprisingly, it’s a lavishly decorated space that forms the heart of the camp.

Here, leather camp beds are piled high with wildlife tomes and local games, while deep-buttoned armchairs gaze out beyond the arches of patterned fabric. Feel inspired? Take a seat at the vintage writing table and put pen to paper.

Surrounding the lounge area, cabinets of curiosities line the canvas walls, filled with skulls and fossils, Stone Age implements and Bushmen artefacts. They have all been collected out on the Pans, or by the Bousfield family over decades of travelling through Africa, and such is the diversity and depth of the collection that the lodge is registered as a National Museum in Botswana.

Whether it’s a quiet moment with a book, or catching up with loved ones, the central tent is a perfect space for slowing down, and sharing the day’s desert adventures. As is the impressive dining tent alongside. The 10-metre dining table seats up to 26 guests, laid with vintage silverware each evening. Communal dining has long been a tradition, and highlight, of any stay at Jack’s.

Though dusty safari shoes are welcomed, dinner is a more formal affair, with three courses paired with a daily selection of South African wines. The menu is as eclectic as the décor, ranging from Moroccan-inspired beef skewers with lentil salad, to fragrant chicken curries. In cuisine as in décor, Jack’s breaks the mould of what you’d expect on safari.

So too when it comes to the enlarged ‘tea tent’ you’ll find through the next canvas alcove. It’s another extension of the Middle Eastern aesthetic that runs through Jack’s like a golden thread. Before afternoon drives depart, guest slip off their shoes and take a cushioned seat on Turkish rugs to enjoy a lavish spread of sweet and savoury bites.

“Jack’s has always been a whimsical place, somewhere unconventional where the natural world surprises and delights,” says Bousfield. “The new Jack’s has built on this legacy [to offer] an Alice in Wonderland-like oasis in the midst of the ethereal Makgadikgadi.”

“Jack’s Camp sits on a private concession that sprawls across grasslands and salt flats, one of just three lodges sharing a wilderness area a shade smaller than Dubai”

And it’s exploring the Makgadikgadi, as much as enjoying the many comforts of camp, which draws travellers to this remote region of northern Botswana. Pitched on the eastern edge of the Makgadikgadi Pans National Park, Jack’s Camp sits on a private concession that sprawls across 4,000-square-kilometre of grasslands and salt flats, one of just three lodges sharing a wilderness area a shade smaller than all of Dubai. 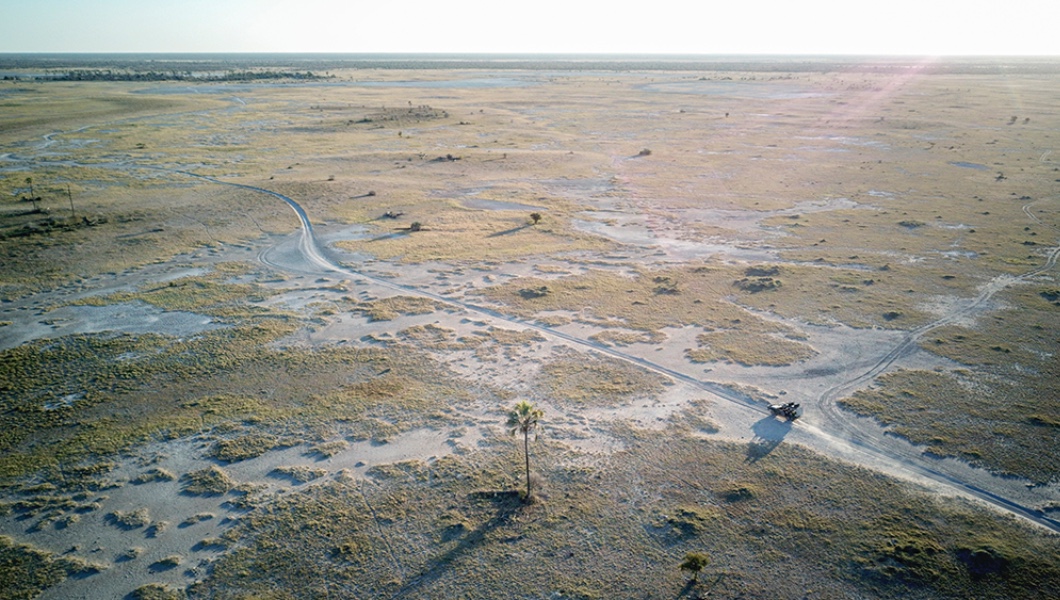 The camp rests on the fringes of the Ntwetwe Pan, one of three – along with Sua and Nxai – that make up the Makgadikgadi ecosystem. And it’s an enigmatic landscape that shifts shape with the seasons. 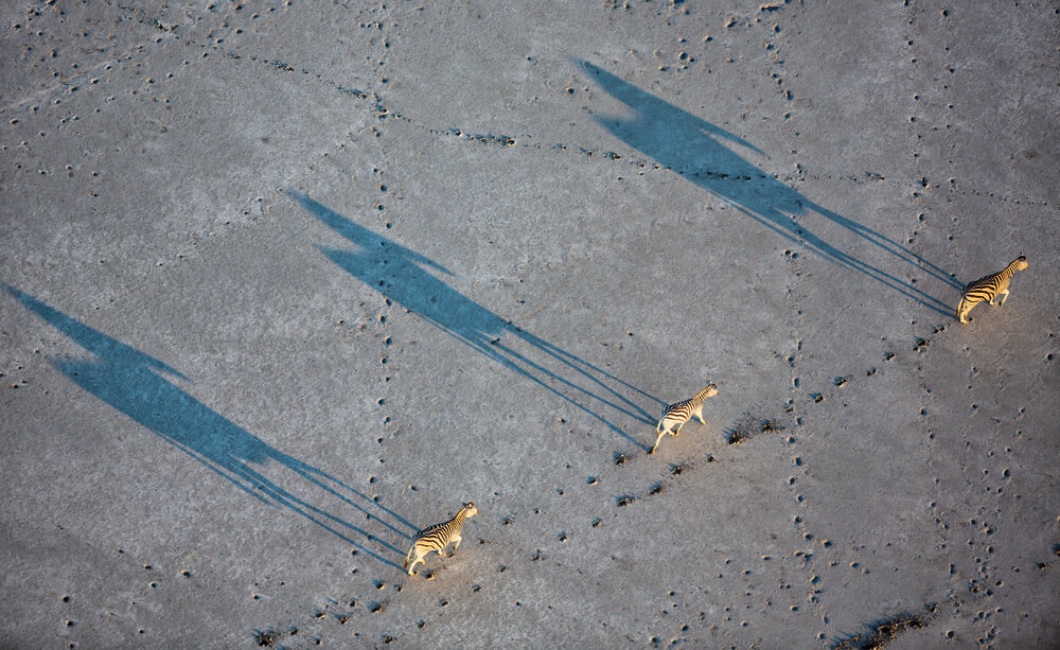 After the summer rains, and stretching into autumn, the vast grasslands here create Africa’s second-largest migration of zebra and wildebeest, with large herds drawn from as far north as the Okavango Delta and the Chobe National Park. In their wake, lion and cheetah follow. And with plentiful water, vast flocks of flamingos arrive here to breed, filling the landscape with colour. 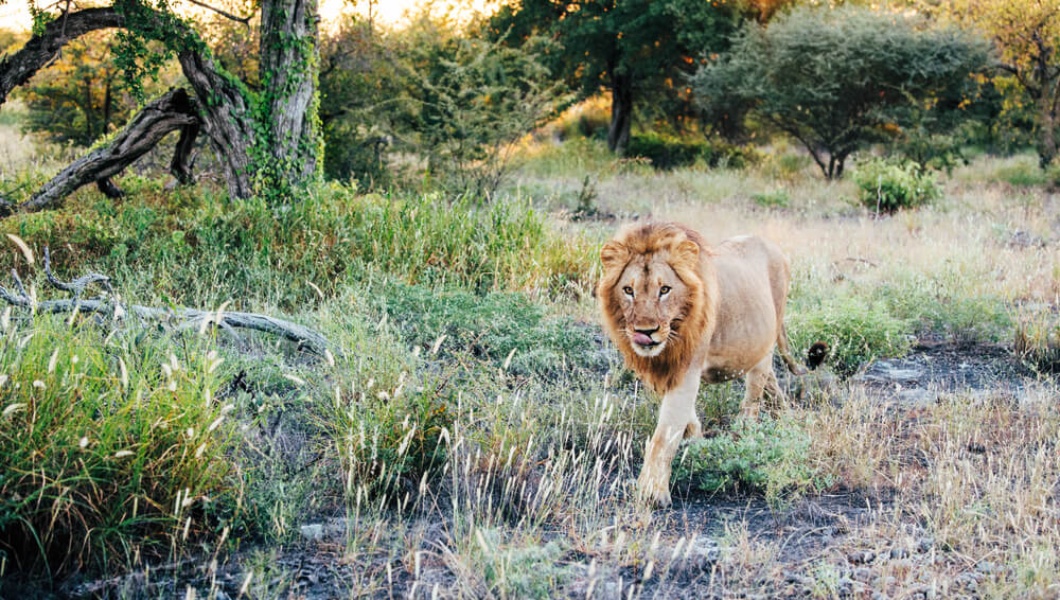 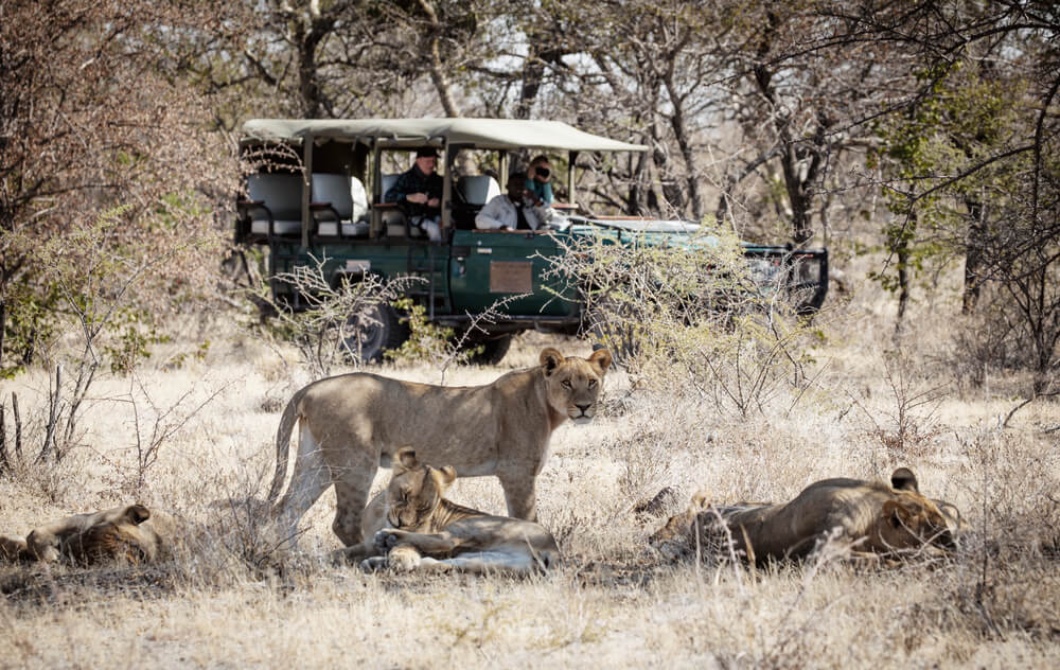 Into the dry winter months the grasses wither and salt pans dry out, allowing guests to explore the moon-like landscape of the Makgadikgadi Pans. Afternoon quad-bike excursions end with memorable sundowners gazing into the mind-bending vision of salt flats extending to the horizon, while multi-day expeditions explore as far afield as Kubu Island, a dramatic island of granite and baobabs some 200 kilometres distant. 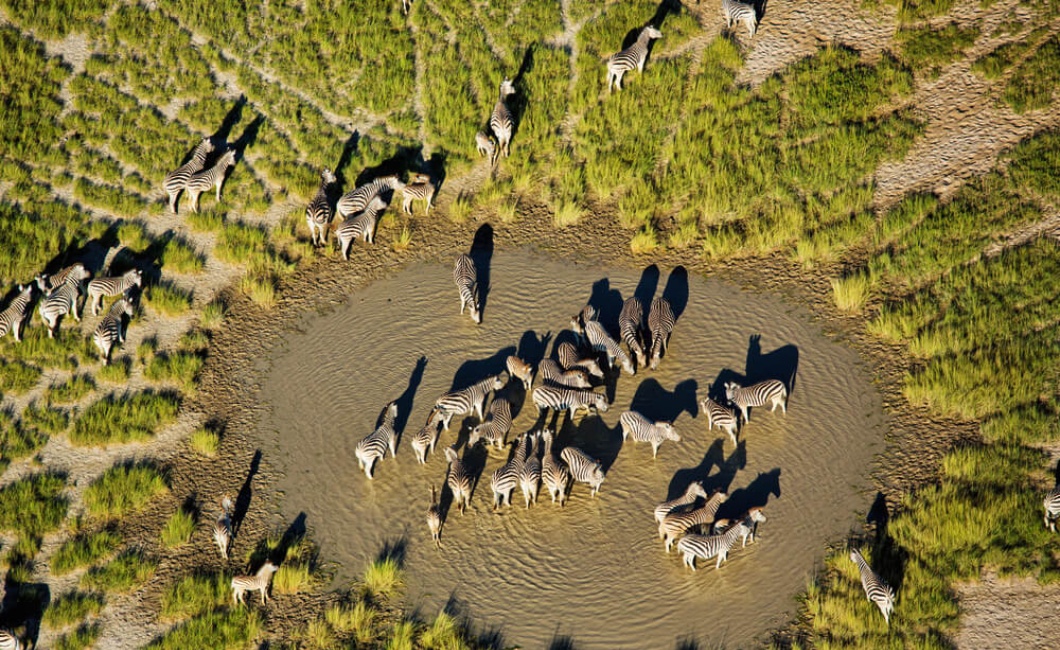 But there’s magic to be found in less adventurous places too. An after-dinner safari drive produces sightings of striped polecat, spring hares and small-spotted genet, all beneath the bright sweep of the Milky Way. 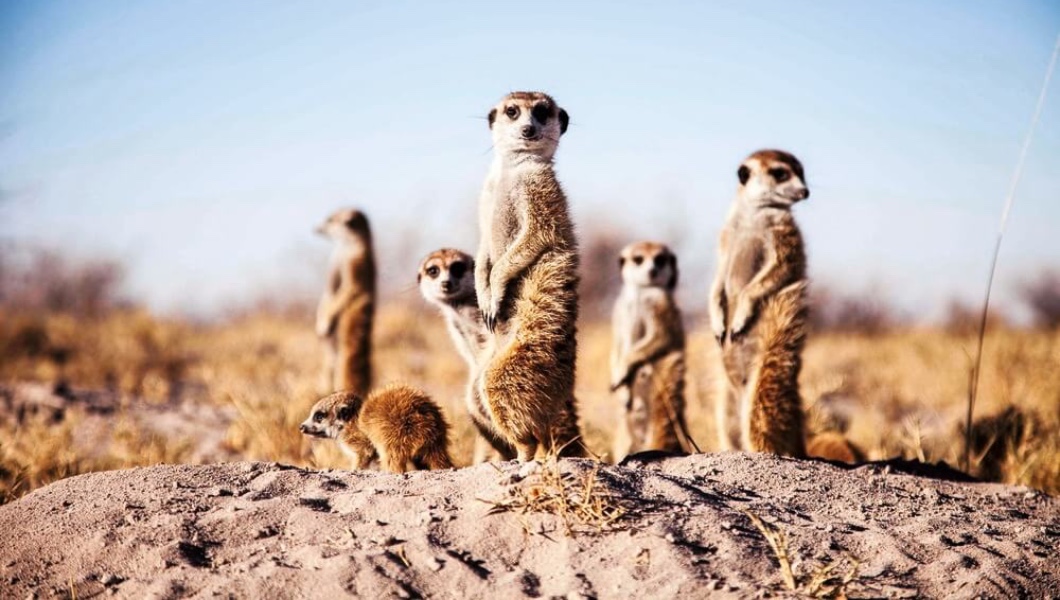 The next morning we’re up with the dawn, driving south in search of meerkats, the curious charmers of the Kalahari. The guides at Jack’s Camp have spent years habituating – but not taming – two colonies of meerkats that will happily sit near, next to, and sometimes on top of, guests. 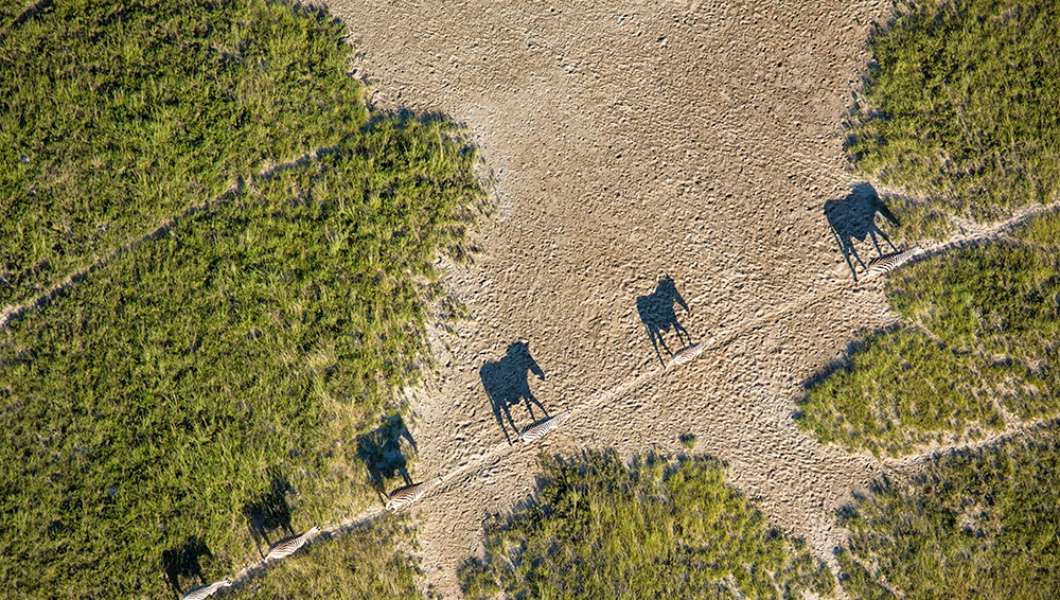 It’s yet another bit of whimsical wonder that makes this corner of the Makgadikgadi so magical. Here, days are filled with adventure and discovery, while nights are spent in the cosseting comfort of Camp. I’m sure old Jack Bousfield would be proud.