Why Los Cabos is one of Mexico’s top destinations

Mexico’s sun-kissed Baja peninsula has revamped itself post-hurricane, writes Becca Hensley, who travels to Los Cabos to luxuriate by the ocean, margarita in hand

Toes dangling off the edge of the yacht, we sail across the Sea of Cortez, heading towards the Pacific Ocean. As El Arco – “The Arch” and symbol of Mexico’s Los Cabos – appears in sight, we slow down to drink in the changing colours of the kaleidoscopic sky. A distinctive rock promontory, shaped like an open, arched doorway, El Arco frames the vista, accentuating the melange of the sunset hues and gleaming white yachts. It seems everyone has ventured out to see the sunset tonight, but as we approach The Arch, our attention is pulled away by something massive in the water. 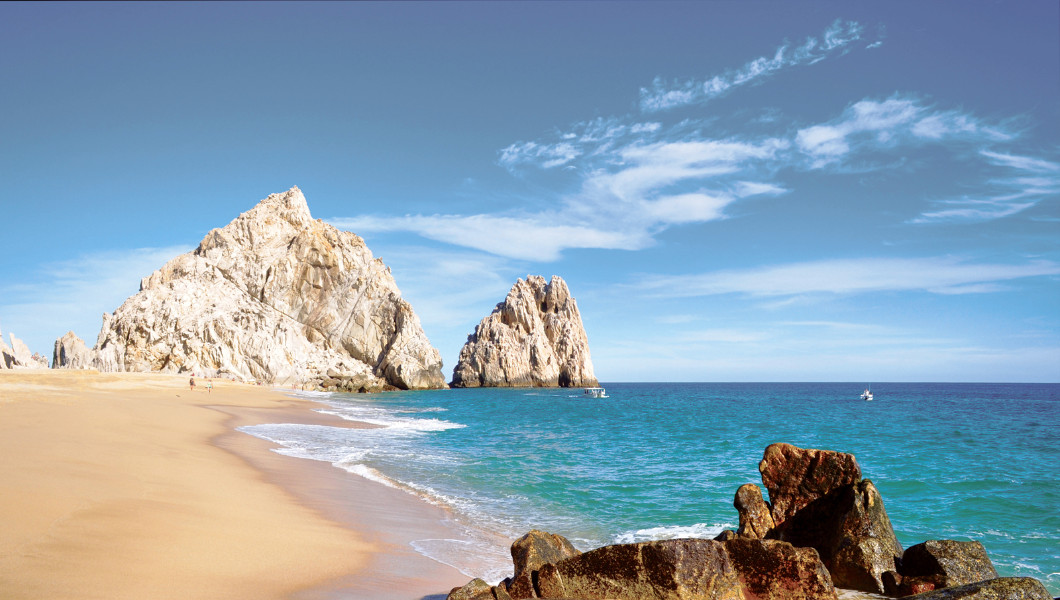 A gargantuan tail whips from the frothy waves. Our captain puts the vessel on full throttle and we advance towards our prize, who submerges, then reappears to seemingly wave at us again. Suddenly, without warning, a column of water shoots towards the heavens and a colossal whale breeches, heaving itself from the sea in a jump for joy. In awe of this magnificent mammal, we are gripped by the urge to do the same – leaping in celebration of this perfect moment. It’s a Cabo kind of thing. Walking around bustling Cabo San Lucas, now a boisterous port town, complete with a marina that features nearly 400 boat slips and streets that brim with bars, restaurants, curio shops and night clubs, I muse about this desert-edged spot, and wonder what it must have been like decades ago when Ernest Hemingway ventured here to cast for prize marlin and swordfish.

Poised on the tip of the 1,220-kilometre-long Baja peninsula, Cabo San Lucas embodies one of two towns that comprise the destination, often simply called Cabo by visitors and locals alike. The other town, linked to Cabo San Lucas by a 32-kilometre strip of beach lined with resorts is San José del Cabo – a more tranquil, historic space, better known for its galleries, authentic local life and 18th-century Jesuit mission. Ensconced amid otherworldly desert landscape, the area caught John Steinbeck’s attention in 1940 when he trekked here to catalogue flora and fauna. It drew Hollywood-heyday stars too, a decade later, who hid away in mansions accessible only from the sea.

I imagine Hemingway disembarking from his fishing boat and brooding in a beachside bar before retiring, perhaps, to an inadequate room (the only kind available then) located near Cabo San Lucas’s former tuna cannery, the little town’s anchor. But Hemingway would not have cared about the room, of course. He would have seen the soaring mountains to the immediate east, their peaks bright with purple shadows splayed out across taupe-toned terrain, and the desert landscape pierced by canyons made teal and pink from copper and iron ore. He’d have marvelled at the human-like shapes of the cacti, hearty and robust, much like the region’s denizens themselves. 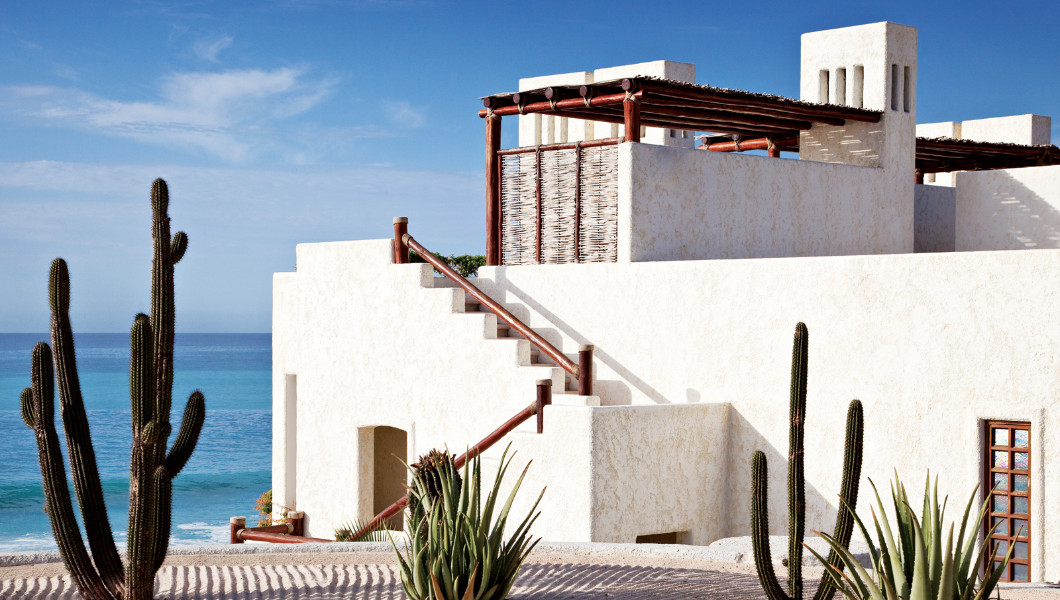 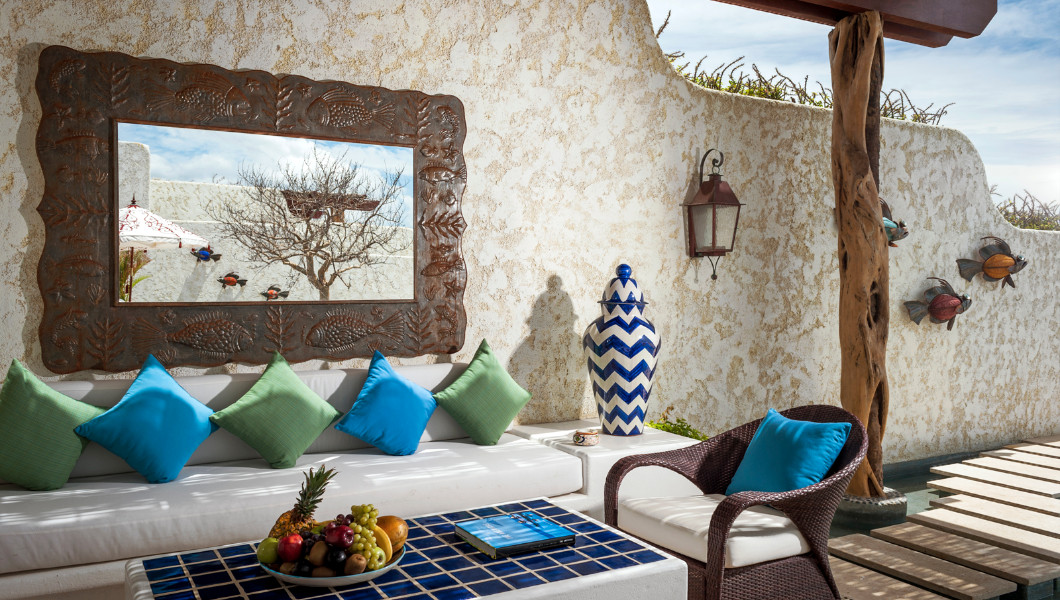 The mountain view hasn’t changed since those days and neither has the sea, still inky blue and angry with riptides and crashing waves. Jacques Cousteau christened Baja’s reef “an aquarium of the world” for its largesse, which today attracts divers, snorkellers, surfers and other water sports enthusiasts seeking the safest spots for ocean play. Now abundant with tony hotels, rich with golf courses – including El Cardonal at Diamante, the first course designed by Tiger Woods – and fed by organic gardens and celebrity chefs, Mexico’s most western resort area rebuilt itself after 2014’s Hurricane Odile to be better than ever – and it’s not stopping its ascent anytime soon. 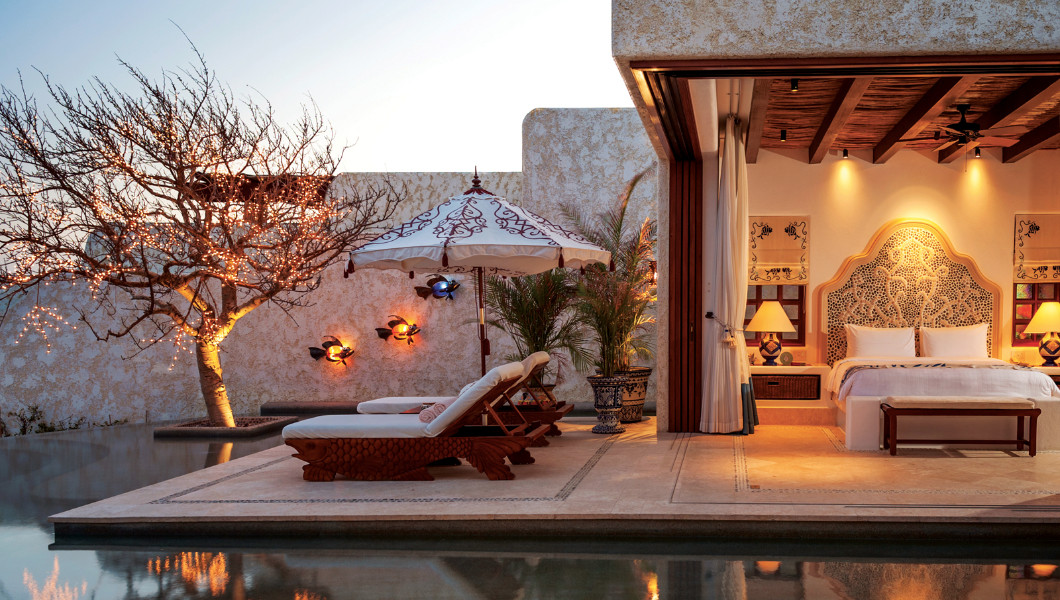 I’ve just checked into Las Ventanas Al Paraiso, a Rosewood Resort, and my room’s not ready. I’m thrilled because that means I get to linger a moment in the outdoor spa reception area and receive a curative head and shoulder massage, a complimentary arrival amenity for all guests. After that, I float up to the al fresco Tequila & Ceviche Bar, utterly relaxed. Nibbling some guacamole, today’s ceviche special (featuring shrimp) and sipping a margarita, I gaze out over the resort’s white-washed coterie of Mediterranean-intoned buildings, the network of undulating pools like a pathway to the sea. At that moment, my butler appears, leading me to my three-story ocean-view suite.

I know I should grab a cabana at the beach, but I can’t get enough of the outdoor daybed, which also comes equipped with a telescope that beckons for whale watching and midnight star gazing. This 83-suite dreamscape, owned by billionaire Ty Warner (the founder of the plush Beanie Babies toys) aptly personifies its name, The Window to Paradise, and acts as a portal to the extraordinary. While all suites feature butler service, the new Signature Villas have “Villa Hosts” further trained to go beyond the pale. They’ll cook your breakfast in your personal kitchen, babysit your children and even walk your dog. A grand villa, being constructed as you read, stands on the headland, promises to be unparagoned in the region.

As if its beaches, pools, restaurants and an indoor/outdoor spa weren’t enough to unravel your knots, Las Ventanas proposes to propel guests further into that supernatural state with its collection of seasonal signature experiences, especially developed for travellers who yearn for more than a nap by the pool. This summer there’s a surfing excursion to the East Cape in a 4x4 Jeep under the tutelage of an expert instructor; an opportunity to design your own indigenous tablecloth in Tenango de Doria, a pueblo known for its hand-woven embroidery; a massage for couples conducted by four massage therapists on a private rooftop terrace to the dulcet tunes of live flamenco music; an art class with a local Huichol Indian shaman; or a chance to pair up with the resort’s star sommelier in a friendly wine-tasting competition. 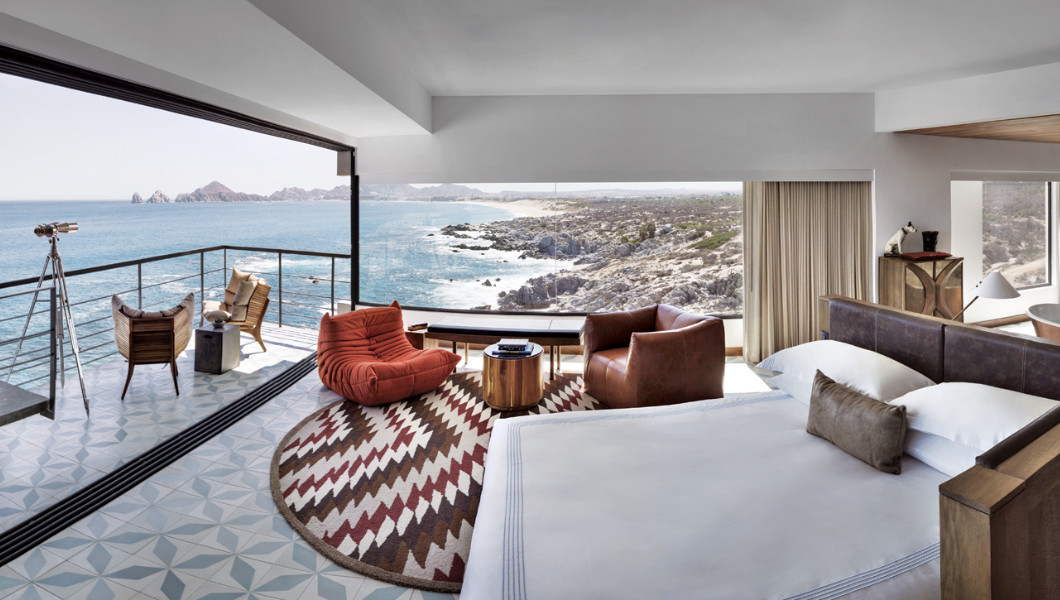 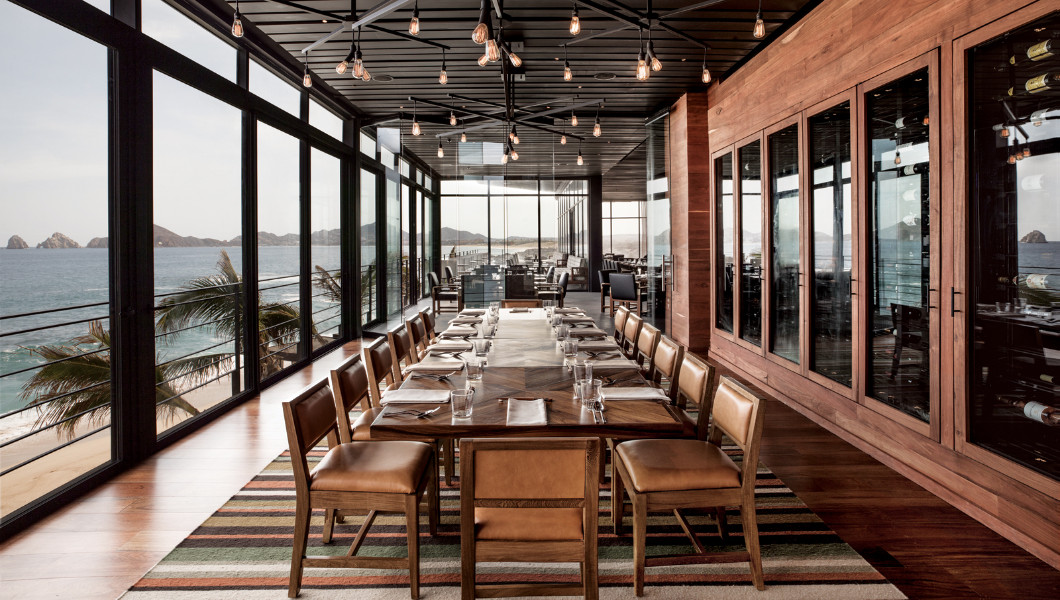 Mexico has always had a tenacious grip on an ever-edgy creative vernacular. Think Frida Kahlo and her avant-garde coterie. To wit, The Cape, A Thompson Hotel, which opened in 2015 after Hurricane Odile with the verve of an artist relishing the chance for a blank canvas. Bringing in the brand’s affection for mid-century modern, the hotel didn’t feel the urge to mimic the Spanish-colonial or mission-revival references found in some of the peninsula’s other top hotels. Instead, The Cape built a 161-room contemporary fortress on one of the region’s most revered surfers’ beaches. With dark wood exteriors that reference sun-dappled driftwood brought in by the tide, the hotel is accented with local art, retro surfing photos, leather accessories – such as pillows – and copper-rimmed bathtubs. I swoon over the splendid sculpture of a whale, composed from objects found in the wake of Hurricane Odile. It dominates the lobby, alluding to the chance to view whales during season while making a point on the beauty of rebirth – exactly what a vacation is all about. 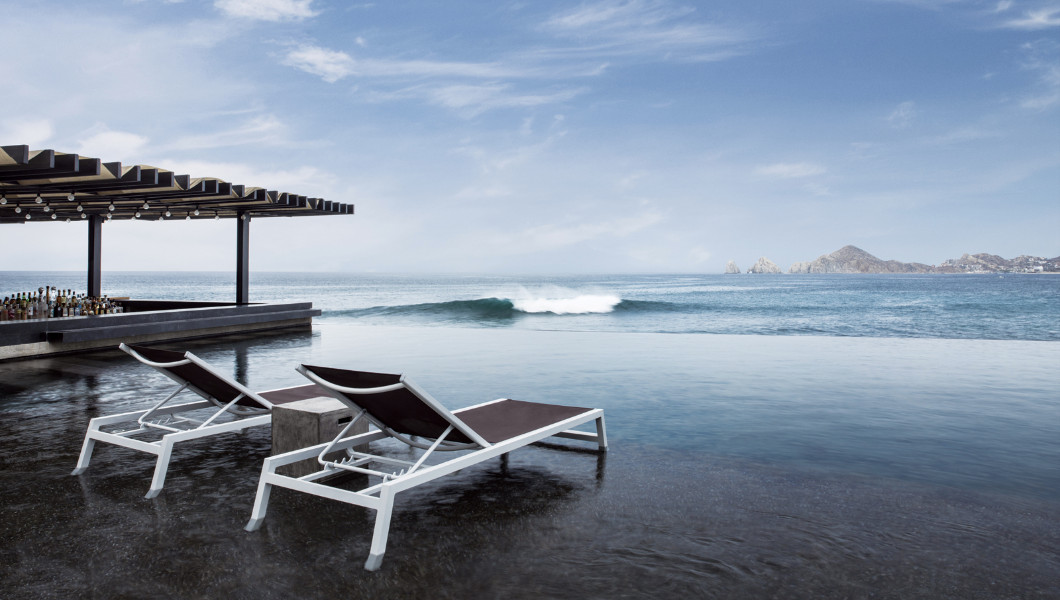 An inviting pool that serves as a hotel living room of sorts, the heart of The Cape looks out to the sea and over to Cabo San Lucas and the sigh-inducing El Arco. Six floors up, a rooftop bar – the only one in the area – lures sunset imbibers and, after hours, music lovers. At the elegantly simple spa, I relish the open-air aspect that channels the reassuring sound of the sea and the beauty of its vistas, enhancing well-executed, soul-replenishing treatments. Already a fan of Mexican celebrity chef Enrique Olvera, I can barely wait to sup at Manta where, appropriate to the seaside location, he brings Japanese and Peruvian influences to Mexican food, both confirming the gracefulness of the Mexican spice wheel and trumping your expectations about fine dining in a nation where rustic food reigns. Don’t miss a nightcap in the Glass Box bar, where head bartender Osvaldo Vazquez teaches me everything I ever wanted to know about mezcal – and more. 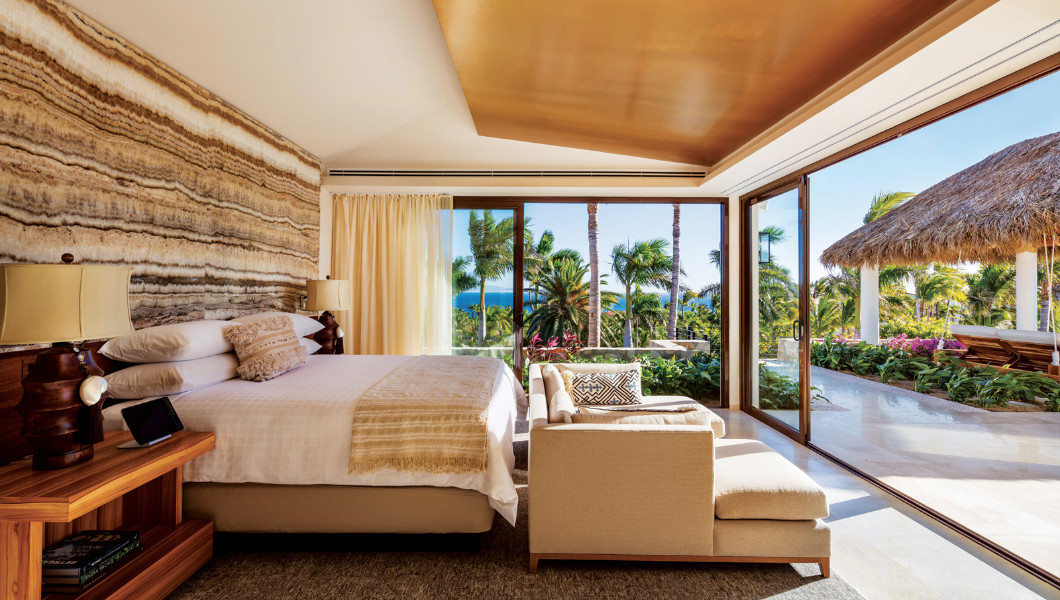 When I arrive to One&Only Palmilla, located about midway on the strip of beach between Cabo’s two cities, within seconds of disembarking from my vehicle I receive the signature greeting: a hand sweetly placed on the heart and a half smile delivered with a purposeful gaze that seems to say, “At your service, señorita. Your wish is my command.” While this might seem a gesture that can be taught to staff, what becomes increasingly clear during my stay is that only a certain type of person works at One&Only – the sort who can deliver such a soulful greeting with authenticity. So, as you wander around the white, stucco enclave – once a private getaway for film-star glitterati in the 1950s – you feel tenderly part of a family who cares for your well-being. Of course, perfect suites and attentive butlers add to the allure. When I find my clothes organised in my closet by colour and a sewing kit custom-made to match my wardrobe, I yearn for a reason to mend something. 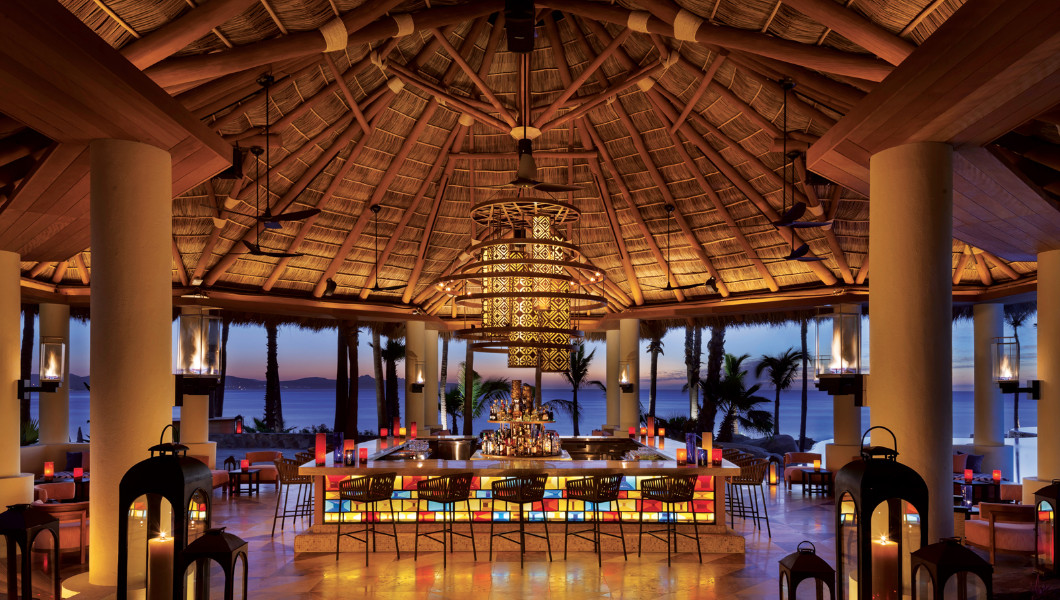 With 173 suites and two villas, including the new Villa One, reminiscent of a glasshouse with floor-to-ceiling glass doors that overlook dramatic coastal vistas. Composed of terraces, and myriad nooks and crannies, the commodious domicile, styled with indigenously inspired furnishings, comes with a dedicated chef, a butler, and a private spa area. With One&Only’s service at your whim, you may never leave the enclave to explore the lava-rock anchored beach. From my suite’s plunge pool and expansive patio, the bone-white sand beckons, though like many beaches in Cabo, the water is considered dangerous for swimmers. Fear not, as the resort also embraces a swimmable beach on its furthest edge, where it even operates a surfing school. 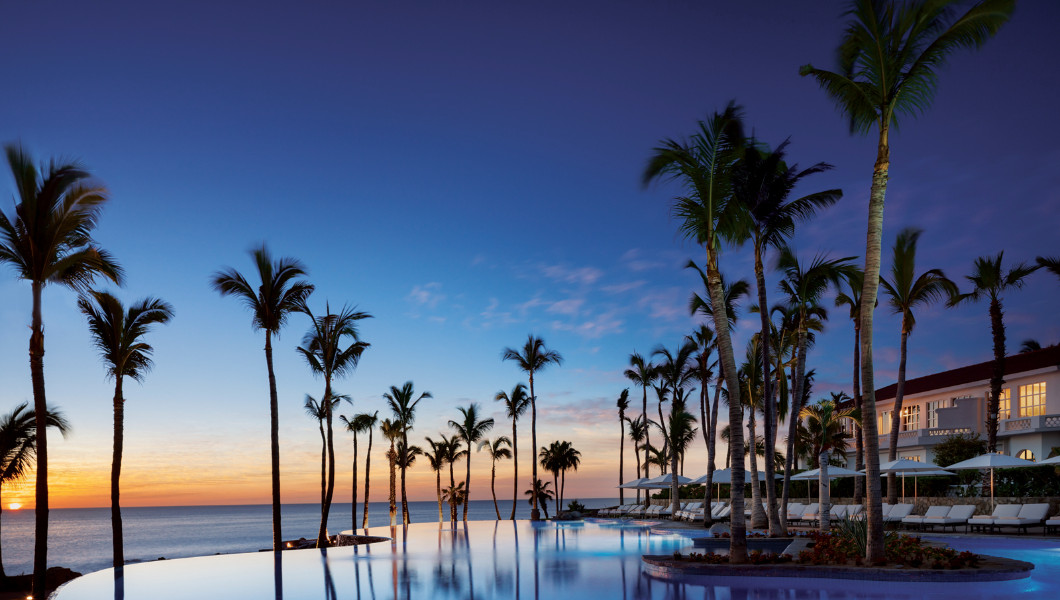 The swim-up pool bar, the steak-obsessed Seared by Jean-Georges Vongerichten, Agua by Larbi (a contemporary Mexican café that delights with table-side ceviche and guacamole carts), and an outstanding shop curated by Gina Garcia keep me busy. But One&Only Palmilla’s (ESPA) The Spa prevails as a wellness destination in itself. Tucked into a secret garden of thatched-roof spa huts, palm trees and pool-dotted nooks, the holistic-inspired haven incorporates myriad indigenous elements, from local herbs to healing traditions into its treatments. Indulging in the Baja Deep Tissue Pandas ritual, I relinquish my stress to a monumental massage, intensified by the use of herb-filled, warm poultices. Men in search of the ultimate shave can get shorn at Barber & Blade, an old-school barbershop located in the spa complex. 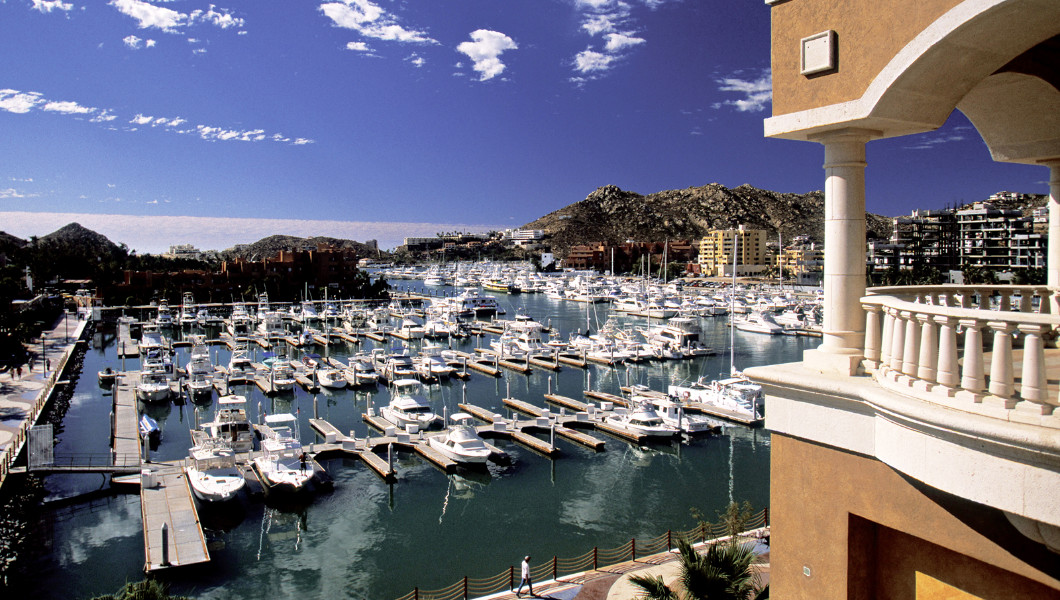 Cabo can’t be compared to any other place in the world. One of the only locations on earth where desert terrain meets the sea and where two oceans combine, coupled with Mexican open-hearted service and affability, the resort region manages to cling to its roots as a rustic sports-fishing hub while enveloping its own brand of cosmopolitan, barefoot sophistication. Peerless hotels might tempt their guests to stay on site, but there’s a wondrous array of things to do and sights to explore, from hopping on a glass-bottom boat to sunbathe at Lover’s Beach, riding a camel in the dunes, perusing the galleries in San José del Cabo, whale watching in winter, or learning to fly board – a sport that melds wake boarding with the powers of jet-pack propulsion. Want to do it like Hemingway? Come in October for the Bisbee’s Black and Blue Fishing Tournament. You’ll make “Papa” proud.