Move over tequila. Whether you sip it neat or savour it in a cocktail, Mexico’s other agave-derived spirit is this year’s most au courant tipple, writes Becca Hensley

I’m standing in a field of agave in Oaxaca, a state in southwestern Mexico well known for its culinary offerings (especially mole), mezcal and artisan handicrafts. I’ve been to this region many times. As a child I spent the summers in nearby Puebla with my grandfather, an expat who left the United States in the 1940s and married a Flamenco dancer. We’d pile into the car together, and drive down dusty roads to explore the various villages. In them, my parents would buy colourfully sewn fabrics and blankets. At cafés on the plazas, they’d sip margaritas or cold beer, while I’d swoon over dishes made from mole, a sauce actually concocted (in part) from chocolate. I hadn’t heard the word mezcal then – but I do remember being astonished by bottles that harboured a fat worm swimming in something viscous.

Today, mezcal, a spirit made from agave, a multi-varietal succulent, which grows profusely across Mexico, hardly ever holds a worm. In the trendiest bars around the globe, it reigns as one of the world’s most au courant spirits. People sip it neat, like a brandy, or relish its smoky complexity in savoury cocktails. “Within the rural parts of Mexico, mezcal has always been an extremely important part of the culture,” says Ivan Saldana, co-founder and creator of Montelobos Mezcal. He points out that urban Mexicans had previously been most interested in international spirits, but an appreciation for local, artisanal products brought mezcal to the epicurean forefront. “Chefs and drinks connoisseurs began to fall in love with the beverage about 10 years ago,” explains Saldana. “Suddenly, mezcal’s popularity grew from urban Mexico to all over the world.” 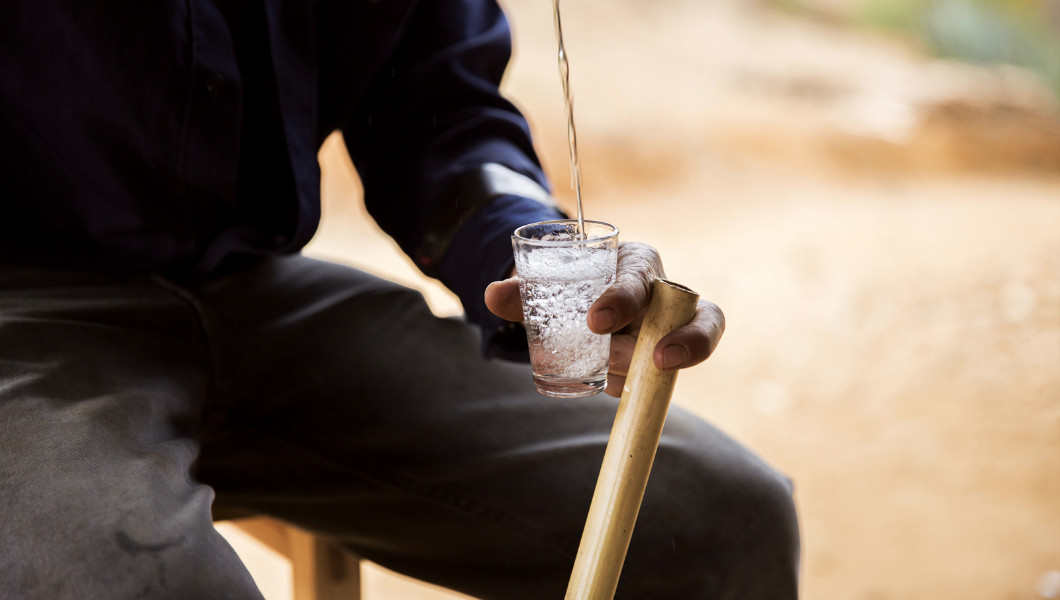 Today, at a friend’s palenque (or ranch), a hilly, agave-packed expanse swirls with shades of jade green. The sun beams down on the sword-like tips of the plants, accentuating the sharpness of their fleshy leaves, like lances that point to the heavens as fingers alight with electricity. Amid them, a man, dressed in white, wearing a straw sombrero, hands me a coa – a long-handled stick with a menacing blade. He’s a jimador, an agave farmer, whose job is harvesting the plant. He shows me how to chop off the leaves, a peeling process I liken to eating an artichoke, though much more rigorous. When shorn, a pineapple-shaped round remains (called a pina), which he tosses into a basket. This is the first step in the centuries-old, handcrafted mezcal process.

Unlike tequila (a type of mass-produced mezcal made from only blue agave), mezcal can be created from any species of the agave plant. That, in part, accounts for its delicious diversity. Legally made in eight Mexican states, with Oaxaca yielding the most, mezcal stands out for its strict adherence to age-old production methods. After the pinas have been gathered, on my friend’s land, I watch a mezcalero (mezcal maker) dig a deep, cone shaped-hole, which he lines with volcanic rock. At the bottom, he makes a wood fire, which eventually burns to coral-hued embers. Filling the pit with the pinas, he caps the top with soil.

Several days later, we uncover the still steaming, now caramelised, smoke-intoned innards. We observe as the mezcalero, using the ancient tahona milling process, crushes the pinas with the help of a donkey, whose slow circling efforts rub together immense stones. Distilled as the final step, the liquor is called joven when removed immediately (un-aged) and reposado or añejo when aged in oak barrels (from two months to eight years). Sometimes sweetened with added fruit, mezcal boasts infinite styles and flavours. How to choose? “Have an interaction with mezcal,” suggests Saldana. “Try many different varieties.”

Several days later, we uncover the still steaming, now caramelised, smoke-intoned innards. We observe as the mezcalero, using the ancient tahona milling process, crushes the pinas with the help of a donkey, whose slow circling efforts rub together immense stones. Distilled as the final step, the liquor is called joven when removed immediately (un-aged) and reposado or añejo when aged in oak barrels (from two months to eight years). Sometimes sweetened with added fruit, mezcal boasts infinite styles and flavours. How to choose? “Have an interaction with mezcal,” suggests Saldana. “Try many different varieties.”

WHERE TO DRINK MEZCAL IN MEXICO:

Vibrant, tony Mexico City surely deserves credit for bringing earthy mezcal into the forefront of the cool kid scene. With mezcal bars all the rage in neighborhoods, such as Polanco and Condesa, the most see-and-be-seen spot for elite travelers is The Four Seasons Hotel Mexico City’s Fifty Mils, which recently opened to wowed gastronomic applause. Dramatic velvet upholstery, sexy leather couches and a sleek marble bar sets the scene for drinks by alchemist Mica Rousseau, best known for his stint at Buddha Bar. With a plentiful collection of mezcales, the bar offers its own fruit-infused delight named Four Fifty, a limited edition made from Espadin agave, distilled three times, and infused with mango, banana, mint and cardamom.

Along the Riviera Nayarit in the swank beach enclave of Punta Mita, chef Luis Fitch dazzles patrons at Los Xitomates, his newly opened, highly touted temple of contemporary Mexican interior cuisine. With a farm-to-fork philosophy, which he began at his first restaurant in Puerta Vallarta, chef Fitch extends his eco-conscious culinary tendencies to his bar where he serves – among other libations – his own mezcal, Vas que Vuelvas, made in Oaxaca. “It is crafted 100 per cent manually from Agave Tepextate.” The best way to drink it? “We offer it with lime, grasshopper salt, warm orange salt and jicama.

3. Beach Cool at The Cape

There’s no trendier scene in Los Cabos than The Cape, a Thompson Hotel, which hovers above the Sea of Cortez. While its rooftop bar offers sunset views of Cabo San Lucas and its famous arch, as well as whales in season, the place to nip mezcal is in the pop-up-style Glass Box bar, which appears miraculously within the al fresco hotel’s interiors in the evenings. With a mezcal alchemy emphasis, the personable hangout holds an agave-based spirits tasting every Thursday, complimentary to hotel guests and visitors. Appropriately called “Juevescal” – a play on jueves (Thursday) and mezcal – the once-a-week meeting may be the tastiest class you’ll ever take. 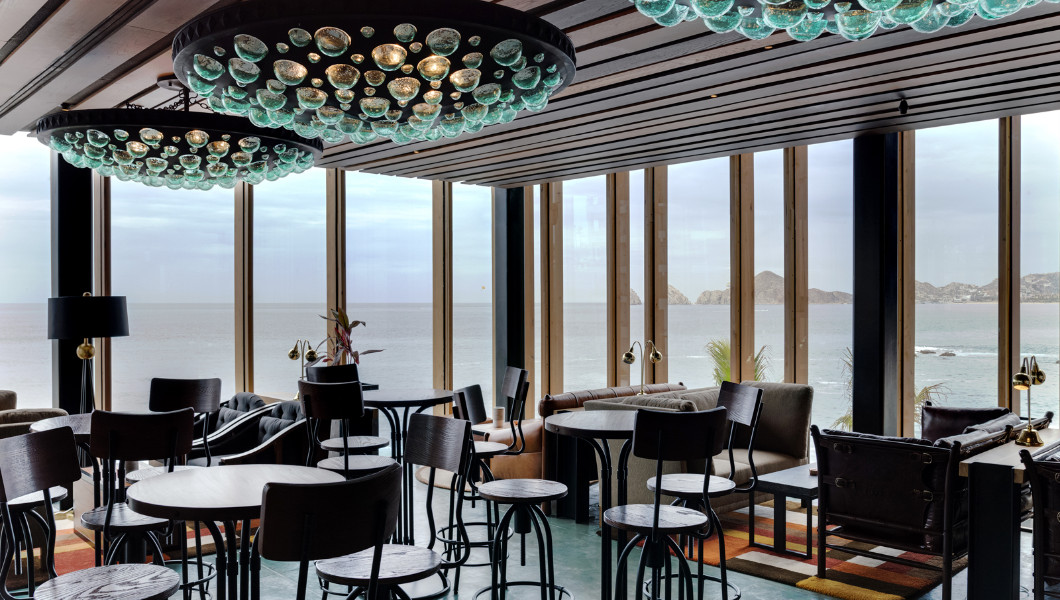 For a true mezcal moment, get thee to Oaxaca City, in the smoky spirit’s homeland. Lilliputian and intimate, Mezdaleria Los Amantes lies in the historic district on Allende Street. Amid quirky, fantastical decor, it features welcoming, informative staff eager to guide you through a variety of flights – all to the background sounds of guitar riffs. Normally full of locals, the bar serves only products from their well-respected distillery. “This is one of my favourite places in the world to drink mezcal,” says Fermín Núñez, a chef from Austin Texas who travels to Oaxaca often to perfect his recipes.